As excited as we were to say hello to the new Beetle when it returned for 1998, we’re just as sad to be saying goodbye to it…again…in 2019. Yes, we’ve been down this road before. So maybe it’s not so much goodbye, as see you later. Whatever the case, here’s a look at the Volkswagen Beetle Convertible Final Edition.

A lot is made in the sports world about players hanging on too long, verses retiring on their own terms when they’re seemingly in the prime of their careers.

Well, the 2019 Volkswagen Beetle Convertible is not exactly at the top of its game right now; but neither is it merely a shadow of its former self. Regardless, it’s going off the field with a special Final Edition.

Last revived for 2012, when Volkswagen dropped “New” from the name, and attempted to inject some testosterone into the bug; pushing the proportions rearward, and sharpening the edges, replacing the cute look for more of a hot rod vibe. 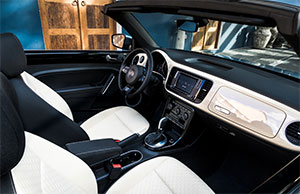 Top operation is simple enough, with a single button to press in the windshield header. It folds behind the rear seats, and off you go, unless you want to protect it, or maintain a snappy look, then pause and snap on the tonneau cover.

Rear seats remain a difficult proposition even for children. And the cargo area is even more modest, at 7.1–cubic-ft. It does beat the Miata though.

But, the Beetle Convertible has always been about leaving your baggage and cares behind, catching some rays, and searching out new experiences.

If the weather “harshes your mellow”, no need to worry, top up the Beetle’s interior is surprisingly quiet at speed, with very little wind noise working its way inside. 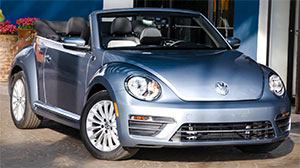 Unlike the good old days, there’s no diesel engine or manual transmission; just one powertrain combo and it’s a good one. The 2.0-liter 4-cylinder turbo outputs 174-horsepower and 184 lb-ft. of torque; and works through a 6-speed automatic.

At our test track, they provided the means to get to 60 in 8.1–seconds. Now, that won’t win you too many stop light Grand Prixs, but it does feel quicker than that, and even spins up the tires a little bit at launch.

Shifts are smooth and timely, helping us finish out the ¼-mile in 16.2-seconds at 89 miles-per-hour.

There’s a soft feel to the Beetle, whether in Coupe or Convertible form; but still very little body roll, and it’s responsive enough to remind you that this platform carried many a sporty Golf and Jetta back in the day.

It all makes you wonder why the Beetle is going away. Well, the truth is, Volkswagen was never able to keep the momentum going after the original New Beetle fanfare died down. And Volkswagen just doesn’t see a good business case for it going forward. But, we’ve learned to never say never; especially when the Beetle is concerned. It would make a darling EV.

Perhaps the most confounding thing about this Final Edition, is not that the Beetle’s going away, or the fact that it’s available in both SE and SEL trims; it’s that even with all of the updates, it is actually cheaper than a comparable non-Final Edition Beetle. A Beetle SE Convertible goes for $29,290. This Final Edition SE, $28,190; the SEL, for $30,890. And of course, you can get a Coupe as well for just $23,940.

So, this review of the 2019 Volkswagen Beetle Final Edition may have been done purely based on nostalgia and desire to give it one last ride. Or, it could be that we’re just suckers for cute and entertaining convertibles. Doesn’t matter, its way more fun than it should be. And, if a VW Beetle Convertible is speaking to you, you’d better act now before it’s gone for good…we think.