While the rest of the world knew it as the Volkswagen Golf, when it arrived in the U.S. for 1976, it was dubbed…the Rabbit. It quickly began multiplying like crazy… so much so, that VW took over a Chrysler plant in Pennsylvania just to keep up with demand. Well, that rabbit hutch didn’t last too long, but the Golf sure has. And, here to celebrate is a special edition…the 2019 Golf GTI…Rabbit!

In all honesty, the fact that this 2019 Volkswagen GTI is a Rabbit Edition is not really what makes it special. No, as we’ll learn, the Rabbit additions are nice but add little to performance. Indeed, what makes this car so special, is that the GTI has always been one of those cars that somehow winds up being greater than the sum of its parts.

It remains front-wheel-drive of course, but the optional DSG automatic transmission gains a gear this year, going from 6 to 7, as well as launch control. However, we chose to stick with the standard 6-speed manual, which is a pure joy to operate. 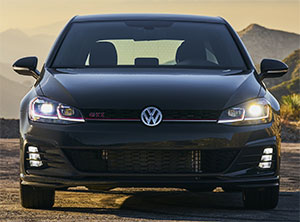 It’s all tethered to Volkswagen’s MQB architecture, which the Golf brought to the U.S. when this Mk7 arrived here 4-years ago.

The Rabbit Edition extras start with gloss black 18-inch wheels, adaptive LED headlights, and a black rear spoiler. Inside are Rabbit seat tags, red stitching for the floor mats, push button start, a host of safety features, and one of four colors including this Urano Grey.

All of this is of course added to the usual GTI aggressive front fascia, side sill extensions, rear diffuser, bright exhaust tips, and red accents.

But GTI news is not all about Bunny Rabbits. The previously optional Performance Package that included the Golf R’s larger brakes and performance-tuned limited slip differential, is now standard on all GTIs. Autonomous Emergency Braking is now available on the base GTI too, and included with the rest.

Inside, things are more comfortable than you might expect; and well put together, with just the perfect amount of nostalgia. Rabbit features the standard 6.5-inch touchscreen version of VW’s MIB II infotainment, as well as lots of big traditional controls.

Space in all seating positions is more plentiful than most small SUVs. As is cargo room; 22.8 cubic-ft. in back, expanding to 52.7 cubic-ft. with the rear seatbacks folded. 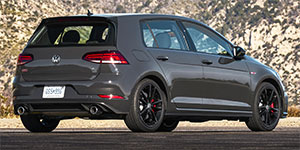 Now, it may not have the ground clearance or high seating position of many of those utilities, but very few of them can match the driving fun you’ll experience here. Even for jaded “been there, done that types” such as ourselves, it’s impossible to be a stoic when you’re behind the wheel of any GTI, especially one with the Rabbit name attached to it.

Made more obvious by our sample. It had over 13,000 hard test miles on it by the time it arrived. So, we admit it, didn’t feel as lively at our test track as we remember the GTI being.

The well-worn clutch had us hesitating to try any full-on launches, but we did slip our way to a decent 0-60 of 7.0-seconds flat.

The shifter itself however, performed flawlessly; it’s virtually impossible to miss a shift working your way down the track. Power seemed to really taper off in the upper registers of the tach, and we never experienced any big boosts of power from the turbo. Our best ¼-mile time was 15.4-seconds, at 97 miles-per-hour. We know from past experience that the GTI is capable of much more.

Government Fuel Economy Ratings for a GTI manual are 24-City, 32-Highway, and 27-Combined.  We shifted our way to 27.2 miles-per-gallon of Regular. Just slightly above average for the Energy Impact Score; 12.2-barrels of oil burned, and 5.4 tons of CO2 emitted annually.

Priced more for the nostalgic than the luxury seekers; at $29,790, the Rabbit Edition is a lot closer to base S trim than top-level Autobahn.

And that just makes us like it even more. After all, if you’re looking for a bargain hot hatch, you might as well embrace the true bargain part of that equation. And, the 2019 Volkswagen Golf GTI Rabbit Edition, much like every GTI that has come before it, even after some abuse, delivers pure driving fun better than most. But remember, there will only be so many of these Rabbits to go around, so you’d better hop on down to the dealer while you can.