History certainly seems to repeat itself. The last generation of the Volkswagen Jetta was sadly Americanized, and that included fitting a torsion beam rear suspension. But soon after, VW made things right with a Jetta GLI and a multi-link independent rear. Well, it’s all happening again, after the 7th generation Jetta debuted, again, with a torsion beam rear, here comes the GLI to set things right.

If you don’t already know, GLI is to the Jetta what GTI is to the Golf. And that makes this 2019 Volkswagen Jetta GLI exactly the type of affordable sport sedan we like around here.

This 6-speed manual comes standard…still…but you can opt for a 7-speed DSG; either way, the GLI remains front-wheel-drive only.

In addition to its new independent rear suspension, the GLI also gets a limited slip differential, retuned steering, a sport suspension setup that has it riding a ½ an inch lower, and the same brakes found on the vaulted Golf R. 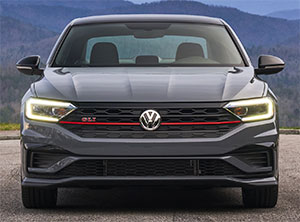 All of that fancy stuff works through standard 18-inch wheels, which are part of an exterior design that provides just a dose more aggression to the humble Jetta form.

The front fascia gets larger air intakes and an extended front splitter. The honeycomb grille mirrors that of the GTI; while sill extensions lead back to a revised rear fascia with diffuser and twin chrome exhaust tips.

Those stylish wheels wear serious summer performance tires, while lurking behind them are red painted calipers. And of course there’s lots of additional red trim, while a deck-lid spoiler tops it all off.

Our tester also happens to be a 35th anniversary edition model, which comes with adaptive damping and an additional Comfort drive mode to go along with Normal, Sport, Eco, and Custom; as well as GLI 35 logos throughout the cabin. But the list of standard content for all GLIs is quite high; LED lighting, dual-zone climate, even blind spot monitoring.

As we’ve already covered, when this MQB-based 7th generation of Jetta debuted last year; that while highly driver-focused, things are quite spacious inside. And materials, though still far from best in class, have improved greatly. 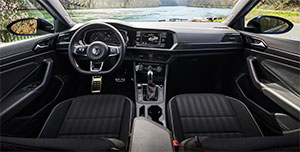 A 6.5-inch touchscreen in standard for VW’s MIB II infotainment; it works just fine, but those that need a bigger screen will find the 8-inch version in top Autobahn trim.

There’s lots of space around the cabin for storing small items, and a huge trunk for the larger ones; 14.1 cubic-ft.

In this GLI, you’ll also find lots of red accents throughout the space, and heated cloth Comfort Sport seats. Leather is available. Research around here, involves plenty of time in those seats; including at our test track.

Throttle response is sharp, and there’s a nice bark from the exhaust. However, the clutch is very light and vague; which makes getting a good launch a little harder than it should be. We seemed to bounce back and forth between unrecoverable amounts of wheel-spin and wheel-hopping for the first few runs. Eventually, we did find the sweet spot and hit 60 in 5.9-seconds.

The shifter itself is quite nice, light and precise; finding the right gear every time, no matter how aggressive you are with it.  It took us through the ¼-mile in 14.3-seconds at 101 miles-per-hour. Not too shabby. 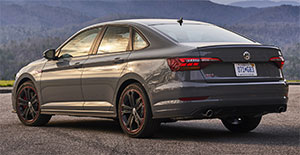 Things were all kinds of awesome through the cones. The GLI stays super flat, responds with laser-like quickness to all inputs with both superb grip and feedback. Weight is over 3,200-lbs, but it sure doesn’t feel like it.

The variable ratio Dynamic Electro-Mechanical power steering’s weight is on the heavy side of good; helping this GLI behave more like an Audi RS3 through here than a Jetta. All while being comfortable and composed; no harshness whatsoever. Love it!

Both forward Collision Warning and Autonomous Emergency Braking are standard; and for additional peace of mind, the Jetta GLI comes with VW’s 6-year or 72,000-mile bumper to bumper warranty.

Government Fuel Economy Ratings for a GLI manual are 25-City, 32-Highway, and 28-Combined. We averaged a good 30.4 miles-per-gallon on Regular.

So, what makes the 2019 Volkswagen Jetta GLI our type of sport sedan? Well, it’s quick, nimble, very responsive, and delightfully daily drivable; but most of all it’s attainable. Which makes sense, since it is from “The People’s Car Company.”