While fully-electric vehicles still make up a very small percentage of new car sales, the options for plugging in are actually growing by leaps and bounds. That’s because plug-in hybrids are showing up in sheet metal just about everywhere these days, including in some of our favorite cars, like the BMW 7-series.

BMW’s 7-series flagship sedan is midway through its 6th generation, and has received many updates; including a new powertrain, along with a new name for this plug-in hybrid version, now known as the 2020 BMW 745e xDrive iPerformance.

Well technically, it’s not a “new” engine as it now adds the battery power to the 7-series’ standard inline-6. Prior to this, BMW mated the electrics to it’s 2.0-liter turbo-4. 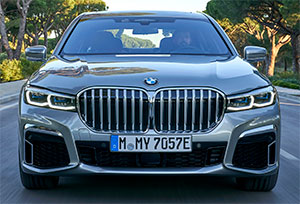 Nothing overly exotic from that point, just the expected hybrid hardware incorporated into the 8-speed automatic transmission and the rest of the xDrive all-wheel-drive train.

There is a larger battery to go along with it, now at 12.0-kWh; enabling an EV-only range of16-miles. Certainly not as much as we’ve seen in some PHEVs, but typical for most large, luxury plug-in hybrids.

The real difference in the driving experience comes from the turbo-6, as once those EV miles are exhausted; this 7 now behaves just like a hybrid version of the base 6-cylinder car; whereas before, you were stuck with an underpowered 4-cylinder.

We expected it to do wonders at the track as well, and indeed it delivered. You can feel astrong surge of electric torque assist right away off the line, but it quickly gives way to the only slightly less impressive inline-6 turbo torque. 60 miles-per-hour arrived in just 4.8-seconds. 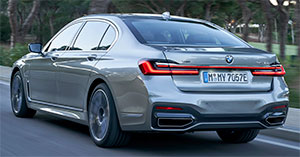 Even without launch control, xDrive seemed tuned for the track, delivering the perfect amount of grip; allowing just a little slip to get things spinning and up to speed as quickly as possible.

Automatic shifts were quick and seamlessly smooth, as the 745e floated down the track like the true large luxury vessel that it is. Our best ¼-mile time, 13.3-seconds at 105 miles-per-hour.

The steering felt a little slow, and there were noticeable amounts of both understeer and bodyroll; but then we took a quick glance down at the speedometer, and realized we were hauling through our low speed cone course at close to 50 miles-per-hour. This is one agile large sedan.

A 112-foot average stopping distance from 60 is fairly impressive for such a heavy car too; and the 7 braced for impact by partially rolling up the windows when we initiated panic stops. 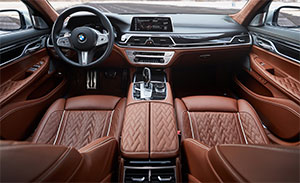 Being a PHEV, some might find the Government Fuel Economy Ratings just as important; and the 745e comes in with a 22-Combined rating, with 56-Combined for the MPGes. We averaged 23.2 miles-per-gallon. By comparison, the last 7-series we tested was of an 8-cylinder variety; and our average was 20.8 miles-per-gallon. Its Energy Impact Score of 9.4-barrels of yearly oil use, and 4.1 tons of CO2 emissions, is well better than average.

This 745e also showcases the many changes that have happened throughout the entire 7-series lineup for 2020. Most everything in front of the A-pillars has been revised, including a new hood, headlights, and front bumper; new front fenders as well, which is where you’ll find the charge port for the745e, on the driver’s side.

And, is it just us, or do BMW’s twin grilles seem to be getting taller and taller? It may be a pedestrian crash thing but we’re not enamored with it.

Inside, screens get modernized; as does the iDrive control system to iDrive7.

There are a few new options for the Nappa leather interior, as well as for both wood and metal trims.

Sound deadening has been increased, primarily for the comfort of rear seat passengers; though nothing changes about the immense amount of legroom back here.

So, where does the 2020 BMW 745e xDrive iPerformance fit in? Well, whether you’re talking about its place in the BMW lineup, or the luxury sedan segment in general, the answer is the same. It’s a no compromise way to increase efficiency without losing any of the luxury experience you came for, with the added benefit of a little added performance. The ultimate in fuel economy? Certainly not, but every journey is comprised of lots of small steps.