In BMW’s never ending effort to add more vehicle variations into their lineup, as well as add more words into their names, we have the 2020 BMW X3 M Competition. Well, because for some BMW fans, an X3 M is just not enough; and yes, it seems everything in life these days is a competition.

It all starts with a 3.0-liter turbo under the hood, as so many BMW performance stories do. This particular epistle is a page turner for sure, at 503-horsepower and 442lb-ft. of torque. The inline-6 internals have been extensively beefed up to handle the added pressure from a revised turbo.

BMW claims a 0-60 time of 4.0-seconds, which we confirmed at our test track. Standard xDrive bites down hard and aids in getting you off the line, but it also seems to bog the car down a bit at first, only releasing fullpower when you build up a little momentum.

From there, the muscle pours on fast and furious, as shifts from the 8-speed automatic click off with sporty precision. All with a terrifically aggressive exhaust growl. We cleared the ¼ in 12.3-seconds at 116 miles-per-hour. Top speed is 177 if you’re interested. 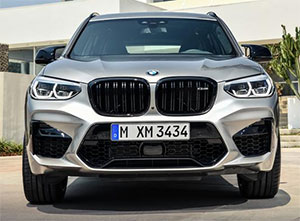 Competition spec means adaptive M suspension and more rubber on the road. The double-joint strut front suspension, and 5-link rear get plenty of tweaking as well. All M’s get structural bracing too, but Competition models take it one step further with larger anti-roll bars.

Performance-oriented M xDrive with active differentials can shuffle power around quickly to whichever wheels are most effective at pushing you towards that next gate.

There’s undoubtedly a lot of micro-processing going on, but it all translates to an SUV that hugs the ground, and corners precisely and cleanly. There’s very little body roll, responsive steering, and an overall “right there” feeling that makes you want to keep searching for its limits.

Blue calipers, behind 21-inch wheels, indicate M compound brakes; which translated to an average stopping distance of just 91-feet from 60. The tires like to cling to every pavement imperfection though, so keep a firm grip on the wheel. 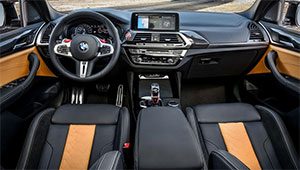 A pair of M buttons on the steering wheel, allow you to have two separate custom drive modes for instant recall when you get to the track, or your favorite back road.

As for the actual utility portion of this ute, a standard power lift gate opens to reveal a very good 28.7cubic-ft. of cargo capacity; 62.7 after folding the standard 40/20/40 split seatbacks.

Rear seat room is good, and there are plenty of adjustment to help you find a comfortable seating position.

And as far as comfort and convenience goes, just about everything your body contacts can be heated…seats cool as well…there’s wireless charging for your phone, a big panoramic moonroof; and you can gesture control your way through the iDrive infotainment system, which is also a touchscreen now, as well as having the traditional controller. Lots of options for interacting with the vehicle, so you can choose your preferred method. 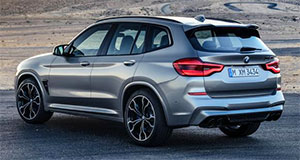 Government Fuel Economy Ratings are 14-City, 19-Highway, and 16-Combined; so our highway-heavy loop’s average of 18.5 miles-per-gallon on Premium fuel was about right on.

But that’s a much worse than average Energy Impact Score, with 20.3-barrels of oil burned, and 9.0-tons of CO2 emitted annually.

So, now you can buy a 500-horsepower small SUV; which sounds weird to say, but shouldn’t really come as asurprise, as high performance utilities are taking up more and more space on dealership lots. And, the 2020 BMW X3 M Competition is the kind of thing we’ve come to expect from BMW; after all, the ultimate performance machine now comes in all shapes and sizes.