As long as you’ve got some healthy numbers in your bank account, there’s never been a better time to buy a full-size pickup truck.  Low gas prices and fierce competition have pushed capability, technology, and even comfort to never before seen levels.  Well now it’s the turn of the Chevrolet Silverado 1500 to crank things up a bit, with a new Duramax Diesel.

While there have been Chevrolet trucks on the road for over 100-years, the Silverado as a nameplate, is a relative newcomer, having arrived on the scene for the 1999 model year. Already into its 4th generation, which began last year, the 2020 Silverado 1500 is now available with a first time Duramax diesel engine. 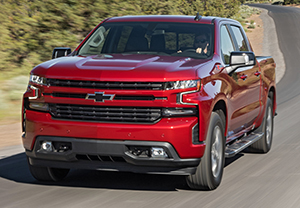 The Duramax name is well known of course, having more than its share of fans.

But, rather than the turbo V8 in their heavy-duty trucks, or the boosted 4-banger in the Colorado, the Silverado’s Duramax is a 3.0-liter inline-6 turbo, all-aluminum, dual-overhead cam mini-monster, outputting 277-horsepower and 460 lb-ft. of torque.  It comes exclusively with GM’s 10-speed automatic transmission; and is available in LT, RST, LTZ, and High Country Silverados in rear or 4-wheel-drive.

The Silverado Duramax tows just 9,300–lbs., which is considerably less than both gasoline V8s that Chevy offers. But it’s not always how much you tow, but how you tow it.  The Duramax’s exhaust brake and turbo-aided power delivery provides a better overall towing experience, and you can’t beat the fuel economy.

Unmatched by rivals, Government Fuel Economy Ratings for a 4X4 Duramax are 23-City, 29-Highway, and 25-Combined. We averaged a great 26.3 miles-per-gallon of Diesel.

That’s an Energy Impact Score only slightly worse than average, with 15.3-barrels of oil consumed, and 6.7-tons of CO2 emitted annually. 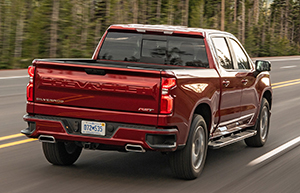 Now, this is not the first time Chevrolet has offered a diesel in their light duty full-size pickup, as it was an option in C/Ks throughout the 1980s and 90s, but this is a first for the Silverado 1500, and first for an inline-6.

GM knows that diesels aren’t for everyone, that’s why it’s just one of five engine choices; two V8s, two 6s, and even a turbo-4.

And, if you haven’t been in a diesel-powered vehicle since the 80’s, you’re in for a real treat.  Not sure if it’s the inline-6 configuration, GM’s secret “noise-attenuation elements”, or just the overall attention to detail, but this Duramax is about as smooth and quiet as it gets; barely any rattle at startup, and just a comforting whistle under full acceleration.

At the test track, our LTZ felt as torquey as we expected; yet hooked up easily and got off the line cleanly. We hit 60 in only 7.6-seconds.

With each smooth automatic shift, it seems to settle down more and more; calmly and casually completing the ¼-mile in 15.8-seconds at 88 miles-per-hour.

Outside of this Duramax offering, there were no other major changes; but some minor ones that include new available trailering mirrors, updated cameras for the cargo bed as well as to aid in towing, and optional adaptive cruise control.

It’s a common complaint that the Silverado’s interior falls short of the competition, but we’d push back on that a little. 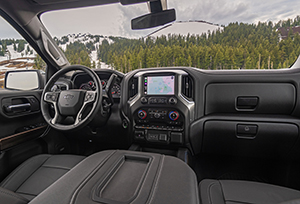 It may not be a visual showpiece, or earn “best luxury car” awards; but everything is highly functional and durable. You know, the kind of things you actually need in a pickup truck.

And in a lot of ways, Chevrolet has always been about function over form.

Take our Cheyenne Road Test from 1988. It wasn’t much to look at, but we praised its excellent handling and roomy interior; and noted its large, clearly marked, idiot-proof controls.

You can make up your own mind about this Silverado’s polarizing exterior design, but you can’t deny it has some serious presence. LTZ adds lots of chrome for the outside, and leather for the inside.

Chevrolet still offers a Regular Cab Silverado with an 8-foot bed, but only in its lowest Work Truck trim. The rest of the trims come with either an extended Double Cab with 6½-foot bed or Crew Cab with 6½-foot or 5-foot 8-inch bed lengths.

The 3.0-liter Duramax is listed as a $3,890 option; though depending on configuration, you may have to add other options along with it. At minimum, you’re looking at $42,385 for an LT Double Cab.

It is indeed a great time to be in the market for a full-size pickup truck. Not only can they get more done than ever, but they do it in a way your grandpa never would have imagined. The Chevrolet Silverado Duramax is the perfect example of a modern pickup; refined, capable, efficient, and ready to get to work.