As the originator of the front-wheel drive minivan, it’s no surprise that Chrysler would be the first to bring to market the first hybrid minivan. But with so many families opting for crossovers these days, is a plug-in minivan a smarter alternative?

A lot has changed since Chrysler brought their car-based minivan to the world for the 1984 model year. That first Dodge Caravan and Plymouth Voyager revolutionized how families traveled, and prompted competitors from numerous brands both domestic and imported. Well, many of those rivals have come and gone, and of course far more SUVs are sold today than minivans. Still, the Chrysler folks, now part of FCA, continue to bring innovation to the segment; including this 2020 Chrysler Pacifica Hybrid.

It’s not only the first hybrid minivan, but the first plug-in hybrid minivan at that. That means this PHEV has 16-kWhs worth of batteries onboard. Fortunately, the Pacifica had a huge amount of underfloor storage space to start with. But that does mean you lose a previous innovation, the Stow n’ Go seating system.

Those batteries provide an electric-only range of 32-miles, enough to push overall range on a tank of fuel to over 500-miles. And, they’ll recharge in only 2-hours with an at home Level 2 charger.

It’s all connected to a 3.6-liter Pentastar V6, converted to run on the Atkinson cycle. When EV-range is depleted, the V6 then works in tandem with the two electric motors for maximum efficiency. Total system output is 260-horsepower; which is about 7-less than the standard Pacifica.  But you won’t notice it, as the electric motors more than make up the difference in feel.

The standard Pacifica’s 9-speed automatic transmission is replaced with an eFlite variable transmission that has the electric motors built into it.

Once behind the wheel, you use the same rotary gear selector as before. Most of us have come to appreciate its compact operation, though not everyone.

But, the proof is in the pudding. Government Fuel Economy Ratings are 30-Combined; with an 82-Combined MPGe rating. We averaged 31.2 miles-per-gallon. That’s 30% better than the 23.7 that we got in our Pacifica long-term a few years ago. And as with all PHEVs, the more plugging in you do; the better off you’ll be.

Other than losing Stow n’ Go passenger and cargo flexibility, nothing major changes inside. Though regardless of whether you get the hybrid or not, there are more standard features for all ’20 Pacificas; including things families appreciate, like 2nd row sunshades. 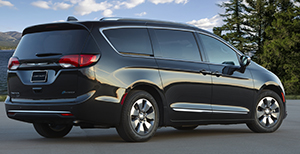 So, the interior is still the most luxurious in the minivan class.

You may lose the mid-ship underfloor storage, but the non-stowing 2nd row seems more comfortable. In fact, there’s not a bad seat in the house, as even 3rd row passengers will be able to take in full-day road trips without a problem.

Updates to the gauge cluster keep you informed on power source and remaining range. Unfortunately, it’s all automatic so you can’t choose when to use electric or gas only. 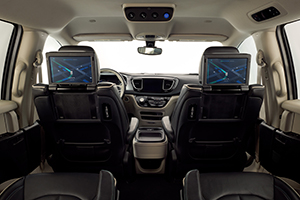 Like most modern hybrids, changeovers between power sources are relatively seamless; with more audible cues than physical ones, as you can definitely hear the V6 when it fires up. We’ll also give a shout out to the CVT transmission. CVTs are rarely a favorite of ours, but here we much prefer its smooth operation over the standard Pacifica’s sometimes clunky 9-speed automatic.

And if the world’s first PHEV minivan weren’t enough, Chrysler is also revisiting the all-wheel-drive minivan, making it a Pacifica option for 2021. You can’t get it as a Hybrid. It’s for gas-only models. It is an all-new mechanical system that should give you one more reason to stay aboard the minivan ship, instead of jumping into the sea of SUVs.

As for the Hybrid, it’s available in mostly the same trims as the non-hybrid, but the base Hybrid Touring starting at $41,990. The price premium over non-hybrids varies with trim level, but can be largely nullified with various plug-in tax incentives where still available.

Being first at something truly has its advantages, as there are no real competitors to be judged against.

But, if history repeats itself, the 2020 Chrysler Pacifica Hybrid could be the start of something bigger. Toyota has already announced a new Sienna Hybrid, although it has no plug. Regardless, when it comes to moving big families and their gear, Chrysler is still innovating, and still leading the way.