Crossovers as we know them haven’t really been around that long.  Ford’s original 2001 Escape was a joint venture with Mazda in response to the unexpected success of the Honda CR-V and Toyota RAV4, and it has been very competitive with them ever since.  19 years later, and it’ time for a 4th generation Escape, and given Ford’s pledge to focus mostly on trucks and SUVs, this Escape could change how we look at crossovers forever. 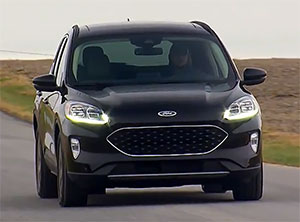 The first round of upstart crossovers, including the original Ford Escape, put a high priority on rugged looks and off-pavement abilities, despite rolling on front-wheel-drive car chassis’.  But, as things have progressed, crossovers like this 2020 Ford Escape, are embracing the role of just being incredibly practical 5-door cars.

The Escape, and its chassis mate Lincoln Corsair, are a key part of Ford’s plan going forward, as both brands transition out of 4-door sedans.

Escape was again co-developed with Ford of Europe where it is known as the Kuga; but even more priority was placed on making it drive more like a car and less like an SUV.

Depending on fitment, the new Escape is about 200-lbs. lighter, and comes with a new isolated rear sub-frame that smooths out the ride, especially over large bumps, without sacrificing handling.  Overall, it’s a much more refined experience behind the wheel.

As to styling, this Escape really does favor a 5-door hatchback more than a traditional SUV.  Body panels are much smoother than last gen, and there’s more rake to the back glass.

Up front, a major change, where the outgoing Escape’s tall truck-inspired face has been replaced with a more rounded and swept-back nose.  And if you squint just right, you can even see a little Mustang influence. 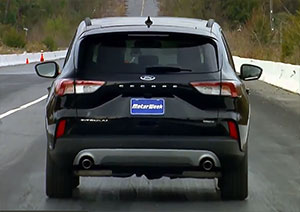 Much like the rest of Ford’s lineup, there are engine choices a-plenty; 1.5-liter and 2.0-liter EcoBoost turbos, as well as a hybrid returning to the lineup, bringing a plug-in friend along with it.

Our tester was that reborn hybrid, which has been out of the lineup since 2012.  The 2005 Escape Hybrid was actually the first hybrid SUV. Hybrid technology has come a long way since then; this is the 4th generation of Ford’s hybrid propulsion system.

2.5-liter I4 based, it gets assistance from an 88-Kw electric motor, and packages most of its componentry inside the electric CVT.  Total output is 200-horsepower; and its small liquid-cooled battery pack is mounted underneath of the vehicle, not inside of it.

All-wheel-drive is standard with the 2.0-liter, optional with the 1.5-liter and hybrid; while the PHEV is strictly front-wheel-drive.  EcoBoost engines pair with a traditional 8-speed automatic transmission.

Hybrid Government Fuel Economy Ratings are not yet final but we averaged 40.5 miles-per-gallon of Regular.

As for acceleration, there’s a more forceful hit of power than you’re expecting off the line.  Engine noise increases significantly as speeds do, but it’s not nearly as offensive as most hybrid CVT setups.  60 miles-per-hour arrived in 8.0-seconds flat; with the 1/4-mile completed in 16.2–seconds at 88 miles-per-hour.

Through the handling course, our all–wheel-drive tester felt fairly nimble with good amounts of grip from the 19–inch wheel and tire package.

The independent MacPherson strut front suspension, as well as the independent double lateral link rear setup has more travel than before, but upgraded shocks better manage the weight transfer.

Even with the load penalty of the hybrid hardware, this Escape feels lighter on its feet than before.  It’s not an all-out performance car feel; but just more solid, stable, and capable.

Not a lot of feedback coming through the steering wheel, but the chassis responds fairly quickly to inputs from it.

Brake pedal feel is surprisingly normal for a hybrid.  Quite effective as well; we averaged only 92–feet in panic stops from 60. 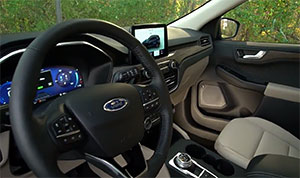 On to more practical matters, Ford is really proud of all of the rear seat legroom in the new Escape, as well as the 6-inches of travel from the seat itself.  And they should be, it easily allows you to prioritize seat space over cargo room, though there seems to be plenty of both no matter where the seats end up.

Cargo floor space is indeed impressive, and even with the rear hatch sloping more than before, there’s a great 34.4 cubic-ft., with a max of 60.8.  Slightly more for non-hybrid Escapes.

Front seats are adequately comfortable, and there’s an abundance of tech features.

All but base S trims come with an 8-inch touch screen for SYNC3 connectivity; and a 12.3-inch full digital gauge display is optional.

Ford’s vision of SUVs no longer being just roomier, more practical cars, but a replacement for them, may be controversial; but the execution of that plan is off to a great start with the 2020 Ford Escape.