From originator, to family staple, through controversies, and various frame on/frame off designs, the ford explorer remains the best-selling American SUV of all time. But the 20-20 explorer arrives with some of the biggest changes in quite a while, returning to a classic rear-wheel-drive layout, while retaining its unibody form. So, let’s find out if that makes for a step forward, backwards, or sideways, for the all-new explorer.

No vehicle better symbolizes the transformation of Sport Utility Vehicles from backwoods explorers to family cars more than the Ford Explorer. Last generation saw it fully embrace that role, with a front-wheel-drive based uni-body architecture.

As mentioned, this 6th generation Explorer returns to it’s rear-wheel-drive based roots; but also debuts a new CD6 uni-body modular architecture that will underpin many new future Ford and Lincoln products, including, if rumors are true, the next Mustang.

No “one engine fits all” strategy here. Buyers can choose from the same base 2.3-liter EcoBoost I4, but now upgraded to 300-horspower. It’s joined by a new 3.0-liter EcoBoost V6 that’s available in 365 and 400-horsepower versions, the latter being Explorer’s most powerful engine ever. 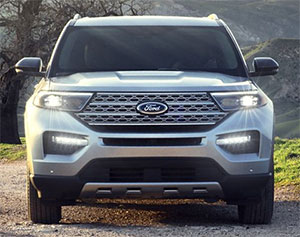 On top of all that, is a first-ever Hybrid Explorer. It pairs a naturally-aspirated 3.3-liter V6 with a single small electric motor mounted between the engine and the 10-speed automatic transmission. Don’t expect huge gains in fuel economy, as it’s more about helping the engine do more with less; and pushing potential range to 500-miles between fill ups. Output is a combined 318-horsepower.

All other engines get the 10-speed automatic as well; and towing capacity is up 600-lbs. over last year to 5,600-lbs.

The optional all-wheel-drive system is Ford’s Intelligent 4WD; and those interested in off pavement excursions will find up to seven drive modes with the Terrain Management System.

Despite being physically bigger, with the new chassis adding over 6 inches to wheelbase; Ford has maintained mostly the same look. The roofline does slope a little more, and overhangs are noticeably shorter; but otherwise there’s no major departure.

Seating for 7 is standard, though in upper trim levels that number falls to 6 with 2nd row Captain’s Chairs. Specs say all three rows are roomier, and indeed it felt that way to us.  The 2nd row being particularly comfortable; 3rd…still a little tight for adults.

Ford did their best to pack Explorer full of technology, including an available 10-inch vertically-oriented tablet that’s the largest screen in a Ford to date. Both it, and the many manual controls that remain, are surprisingly user-friendly and placed in areas that are not distracting to use while driving. 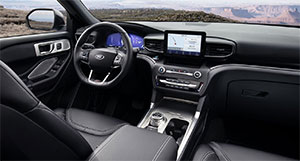 Cargo space, under a standard power lift-gate, starts at a great 18.2 cubic-ft. behind the 3rd row; folding the 3rd row ups it to 47.9 cubic-ft., with a max of 87.8 with all seats folded. With all hybrid hardware packaged under the rear seat, those numbers are exactly the same in the Explorer Hybrid.

Most importantly, this Explorer remains a very comfortable, predictable vehicle to drive. During our early seat time in the Pacific Northwest, we spent the bulk of our stint in the new Hybrid; and acceleration was quite impressive, as was overall powertrain smoothness.

We even got off the pavement a bit and found lots of grip in all situations we encountered, as well as a very solid overall feel.

A base Explorer is still a relative bargain, at $33,860. Top level Platinum goes for $59,345; and there are many options in between, including the Hybrid, which as for now, is only available in Limited trim, starting at $53,375.

So, regardless of whether the front or rear wheels are providing the bulk of the power, this 2020 Ford Explorer is indeed still an Explorer.  But, with 7½ million having been built, we’d say it’s exploring days are just about over, having passed through colonization, and well on its way to nation building. So, Explorer nation, your new ride has arrived, and it’s still looking to claim more ground.