We all know that a Genesis SUV is coming, but before the utility era of Hyundai’s luxury brand begins, they are making one more statement that elegant sedans remain the definition of traditional luxury transportation. So, despite being on the market only 3-years, their flagship G90 is getting a thorough makeover. Now, let’s go back to the beginning.

Distinguished and elegant are words used quite often when describing a luxury brand’s flagship sedan. And while those descriptors did indeed apply to the original 2017 Genesis G90, they felt they could do better. So, they’ve given the 2020 G90 a comprehensive makeover to win over the masses, or at least a few more people than before.

Not that they’ve gotten off to a bad start; sales continue to climb quite well for an upstart marque. But, this G90 is barely recognizable as the car that launched the brand just three years ago.

Everything, except for the roof and doors, is indeed new. Genesis believes in the power of four, as new split Quad Lamps handle illumination both front and rear; while every body panel has been reshaped to project a lower and wider stance. 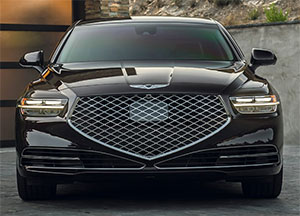 But the real piece de resistance is the Crest Grille that will be a signature throughout their lineup going forward; it looks a little big and braggadocios for us, as we tend to prefer the more understated elements of luxury.

Another highlight is the G-Matrix diamond pattern applied throughout the exterior, including the 19-inch wheels.

While there are some mechanical upgrades in place, there are no changes to the powertrain options. You still have your choice between a 365-horsepower turbo V6, and this naturally-aspirated 420-horsepower V8 with 383 lb-ft. of torque. Both available as rear or all-wheel-drive, and each working through an 8-speed automatic transmission, with a nice substantial shifter on the console.

Having driven both, there’s a clear horsepower advantage with the V8; but torque numbers are relatively close, and both feel plenty powerful.

At the track, our rear-wheel-drive V8 tester didn’t want to unleash all 420–horses at the get go, preferring to dole them out gradually as we got rolling. But once everything was firing at full, power felt immense. Expect to arrive at 60 in around 5.0-seconds.

While the G90 feels right at home freight-training down the track at full-speed, it’s not really made for zipping in and out of cones. So, plan on dealing with some big car body roll; as well as both oversteer and understeer, depending on how aggressive you are with inputs. But it held its own quite well, despite a suspension designed with plush ride quality as its number-1 priority.

Brakes were quite effective at halting this close to 5,000-lbs. luxury liner; needing just 111-feet to stop from 60 miles-per-hour.

Some structural reinforcements have been applied, primarily for the purpose of safety; but it also affects ride quality for the better as well, giving it a more solid feel than before. The level of quietness inside is equal to any other traditional luxury brand, and even some EVs, unless you really get on the gas.

The interior layout remains the same, but most surfaces and switchgear have been addressed with improved materials. The 12-inch infotainment screen is now a touchscreen, and gets an updated user interface to go along with it. The central controller is still in place and is pretty simple to master as well.

Quilted leather seats adjust in just about any way you could imagine, and are as comfortable as they are luxurious looking.

Space is abundant, and almost everything comes standard. Options are mostly in regards to how comprehensive you want things in the back seat. This Ultimate setup is clearly designed for keeping adults comfortable and connected, not necessarily for the kids.

Now, if you’re a control freak, be warned, back seat passengers can control just about everything in the car.

15.7 cubic-ft. of trunk space means those comfortable adults will also be able to bring plenty of baggage along with them.

As expected, safety systems have been upgraded and semi-autonomous driving features will keep you in your lane, but do require you to keep your hands on the wheel. And when on the highway, the G90 can now adjust your speed automatically when it recognizes a speed limit change.

Government Fuel Economy Ratings for a rear-drive V8 are 16-City, 24-Highway, and 19-Combined. We averaged 18.2 miles-per-gallon of Premium. That’s a worse than average Energy Impact Score, with 17.3-barrels of oil consumed and 8.0-tons of CO2 emitted yearly.

Clearly, the 2020 Genesis G90 is much more distinctive looking than before; but more important to us, it also has the confident road manners that puts it on par with the rest of the ultra-luxury segment. This car makes you feel like you’ve truly arrived. And the Genesis brand surely has as well.