It took until 2017 for the Honda Civic Type R to finally make it here to the U.S. And as the fastest, most powerful Civic ever, it did not disappoint; feeling less like a souped-up Civic, and more like a purpose-built high performance machine that just happened to have a Honda badge on it. Well can it get any better than that? Well let’s find out.

While the Honda Civic Type R is easily the fastest and most powerful Civic ever, things rarely sit still in the performance car field for long. So, Honda has bestowed a host of updates for 2020 to keep the Type R relevant, attract more attention, and perhaps even give owners a reason to upgrade.

And we love it when performance updates are listed right at the top of the press release instead of things like “bold new styling ”; and for ’20, the Type R’s suspension, brakes, and engine cooling have all been addressed. 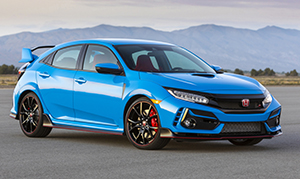 Suspension changes begin with a software update for the adaptive dampers that allow them to make decisions 10-times faster.

On the hardware side, stiffer bushings are in place, both front and rear; along with lower friction ball joints to heighten steering response.

It makes for a fun, yet still easy to drive daily-driver.  But of course, a trip to the track was necessary to get a full “grip” on the situation.

And there was indeed plenty of grip to be found.  The Type R really excels here in a tight slalom exercise.  Steering is tight and super responsive, with almost all of the Civic’s front drive understeer dialed out.  Everything feels “just right” and it was a real blast to work in and out of the cones; with some of the fastest course speeds we’ve ever seen.

As for the brakes, the previous 1-piece front rotors have been upgraded to a 2-piece design that is lighter by 2½-lbs. per wheel.  Thus, also helping the handling cause.

The Type R’s 2.0-liter turbo I4 engine doesn’t get any performance enhancements of its own; still spinning up the same 306-horsepower and 295 lb-ft. of torque.  But additional cooling has been provided to keep it happier on track days. 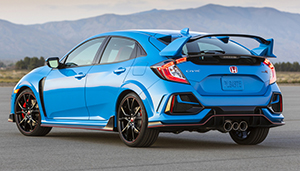 It’s still not the easiest car to launch. Finding the sweet spot between bogging it down and spinning up the front tires too much is challenging.  The clutch itself is great, with a surprising amount of feel, and we were able to jump to 60 in 5.4-seconds.

We’re less fond of the 6-speed manual, which is of course your only transmission option here in the Type R, or more specifically, the shifter. We’re not crazy about its feel; not wanting to be rushed, especially in the all-important 1-2 shift.  The knob also can get very hot left sitting in the sun all day.

Once away, power really pours on when the tach passes 3,500 RPM.  Doing your best to keep it above that threshold will result in a very quick, but not insanely fast, ¼-mile time of 14.1-seconds at 102 miles-per-hour.

A Helical type limited-slip differential is standard, and basically eliminates having to deal with any torque steer.

Additional engine cooling comes by way of increased airflow; openings in the front fascia are 13% larger than before, resulting in an 18-degree reduction in engine coolant temperatures.

Which brings us to the loudest thing about this Civic Type R; and that is its looks. It’s certainly the most aggressive and fast-and-furious looking Civic ever. The aforementioned increased airflow through the front bumper resulted in a decrease of downforce, which Honda addressed with a front spoiler redesign. 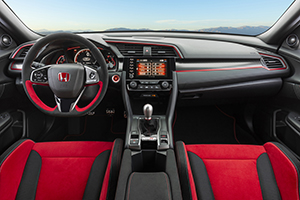 The rear bumper is also new; and of course it remains strictly a 5-door hatchback.

And while both looks and performance have gotten more extreme; Honda keeps its daily-driving sensibilities fully intact. And that’s nothing new for Honda, going back this “hot-stepping” Civic Si from 1989, which was then the sportiest Civic available here in the U.S.  We praised its superior handling, remarkable balance, and fun demeanor; yet pointed out it all comes with Honda’s typical efficiency, and well thought out engineering.

One final noteworthy addition for ’20, is the debut of Honda LogR performance data logging app.

That makes for an average Energy Impact Score; 13.2-barrels of yearly oil consumption, with 5.9-tons of CO2 emissions.

While we waited 20-years to get our first Type R Civic here in the U.S., we only had to wait those 3-years to get an even better one.  Thanks Honda, for keeping us in the loop; and for giving the 2020 Honda Civic Type R the “type” of upgrades that make it both a better performer and even more fun to drive.