While competition is stout in every crossover segment; but it’s still the compacts that are seeing the most action, with the Honda CR-V and Toyota RAV-4 duking it out for the top 2 spots. Now Honda has been looking up at Toyota for a while now and you know they’d love to change that. So enter an updated CR-V with more style, more features, and more MPGs. But, will it be more popular?

One tried and true way to be more popular is to offer more choices. Still, you have to file this one under the “why didn’t this happen already?” banner. You see, the 2020 Honda CR-V is now available here as a hybrid. While it’s Honda’s first hybrid SUV, it’s been sold in Europe and Asia for a couple of years already.

The powertrain is lifted from the Accord Hybrid, starting with a 2.0-liter I4, rated at 143-horsepower on its own; now add in a pair of electric motors, for a total of 212-horsepower. 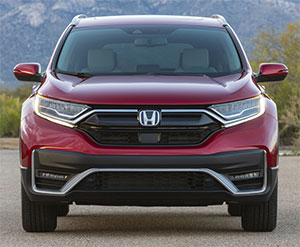 As in the Accord Hybrid, there’s no conventional transmission, just a clutch system between the electric motor on the back of the engine, and the motor on the differential. That differential motor is actually driving the wheels on most occasions, with the engine providing generator-like power to it. Though the clutch can engage the engine at any time.

Government Fuel Economy Ratings are 40-City, 35-Highway, and 38-Combined. We averaged 35.3 miles-per-gallon, which is a bit short of the 38.6 we averaged in our long-term Toyota RAV4 Hybrid that we just finished a year with.

But the CR-V Hybrid still has a much better than average Energy Impact Score, 8.7-barrels of oil consumed, and 3.9-tons of CO2 emitted annually.

The Hybrid also comes with standard all-wheel-drive; and this is the first time Honda’s 2-motor hybrid system has had to deal with anything other than just the front wheels. But, it’s largely the same arrangement as the regular CR-V. So, unlike some competitors that use a rear electric motor, the CR-V uses a traditional mechanical drive shaft to the rears, with an electronically controlled differential that engages whenever slip is detected.

Some things inside are unique, as a button shifter array similar to the Honda Pilot Elite’s replaces the traditional shifter. 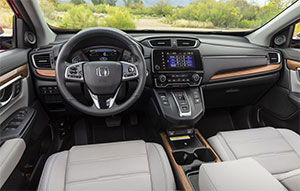 There are also unique digital readouts with all the usual hybrid power-flow info.

Things are as roomy and family-friendly as ever; with the possible exception of the infotainment system which has never been one of our favorites. All CR-Vs will share this revised center console with more flexible storage.

It does have an EV mode, but with the small 1.4-kWh battery, it’s only enough to get you about a mile; and it takes very light application of the throttle to keep the gas engine from kicking in.

It does feel very torquey off the line, and throttle response is definitely heightened over the standard CR-V. But, it runs out of steam pretty quickly. It took 7.9–seconds to hit 60 miles-per-hour, which is actually 4-tenths slower than the 1.5 turbo. 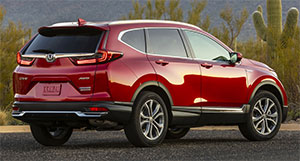 We give this gen CR-V high marks for handling. And, despite a Hybrid weight gain of about 200-lbs., everything remains largely the same. The suspension has been stiffened, not for performance sake, but to deal with that additional weight. Through the cones, it felt quite agile and well-planted.

Everything is wrapped in newly updated clothing; and not just specific to the Hybrid, as all 20’s get a mid-cycle freshening of the front and rear fascias, plus new wheels. Hybrids gain unique fog lights integrated into a distinctive front bumper; along with special blue accents.

Available in all trim levels, Hybrid pricing starts at $28,870 for a base LX, and of course that’s with all-wheel-drive; $1,200 over an LX trimmed AWD turbo.

The 2020 Honda CR-V Hybrid enters an already crowded small hybrid SUV segment, many with very similar specs. But, the CR-V Hybrid has well documented quality, plus a family-friendly nature with lots of room to roam in the cabin. No wonder the CR-V is the #1 selling compact crossover of all time. And much like the Toyota RAV4, it’s not just a more efficient CR-V, but a better one, and that means more sales. Honda has made a renewed commitment to broaden the battery options in their lineup, and this CR-V Hybrid is certainly a great way to kick that off.