It’s not very often that a truly new engine technology comes along. But, when the Infiniti QX50 arrived last year, it brought along the world’s first variable compression ratio engine along with it. But apparently that and other additions were not enough. Now Infiniti has even more changes to further boost its appeal.

Indeed, there were a lot of major updates to the Infiniti QX50 last year. Besides the first production variable compression ratio engine, there was an all-new front-drive platform, and together they helped boost model year sales by 50%. Now, for 2020, it’s time for updated tech, luxury, and safety features.

With the compact QX30 no longer in the Infiniti lineup, this QX50 has a tall task of appealing to both entry-level buyers, as well as delivering the expected Infiniti experience to brand loyalists moving up from sedans.

So, they’ve expanded their level of trim offerings from entry Pure and basic Luxe, to two additional trims at the high end, Autograph and Sensory. Our test car showcases the now middle-ground Essential makeup. 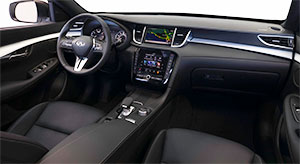 And we do see the reason why Infiniti felt a need to add posher options; as while not exactly disappointing inside, it’s not as luxurious as many would expect from Infiniti. Still too much like just a high end Nissan.

Regardless of fitment, all 2020 QX50s get upgraded to the next gen InTouch dual-screen display; with an 8-inch display screen up top, and 7-inch touchscreen just below.  Apple CarPlay and Android Auto are standard.

Now, just to refresh you on the QX50’s ground breaking engine; it’s a 2.0-liter turbocharged I4 that continuously varies its compression ratio between 8:1 and 14:1, by adjusting the piston’s top-dead-center position through a multi-link system with a Harmonic Drive reduction gear.

Now, that’s a lot of techno mumbo-jumbo to say that it stays very busy to deliver the power of a V6, with the fuel efficiency of a 4-cylinder. Specifically, power output is 268-horsepower and 280 lb-ft. of torque.

And the Government Fuel Economy Ratings are 22-City, 28-Highway, and 25-Combined.  We averaged a fine 25.9 miles-per-gallon of Premium. 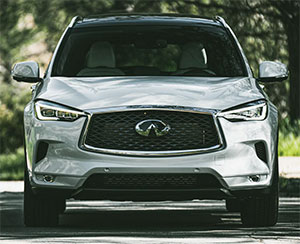 And it does indeed feel very powerful; too much so at times, as when it comes on, it really comes on. But at other times, particularly when cruising about town with mid-throttle inputs, it doesn’t feel as torquey as most turbos. Punch the pedal and it’s also a bit buzzy, though Nissan’s Xtronic CVT takes some of the blame.  As for routine driving, the overall experience is quite good; the suspension soaking up whatever road imperfections it comes across, without feeling floaty or soft.

From the driver’s seat, it is a unique perspective looking over the twin humps of the highly sculpted hood. We really like the overall very artistic design with lots of swoopy curves to the bodywork, meshing with the jagged lines around the greenhouse.

And despite shifting from a rear to front-wheel-drive platform, the complete look is more SUVish than the previous gen.

At the track, the QX50 got off the line cleanly; and after a brief surge of power, it consistently worked its way down the track without any interruptions, despite an occasional simulated shift happening in the CVT. 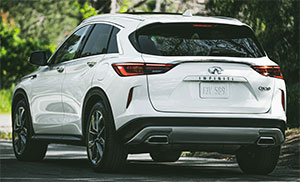 Being based on the front-wheel-drive Altima chassis, had our hopes relatively high heading to the handling course, but the QX50 is a hard vehicle to get a grasp on. There's just no feel whatsoever through the steering wheel.

Our test car did have Infiniti’s Intelligent all-wheel-drive, so there was plenty of grip; but between the lack of feel, and the engine dealing out varying amounts of torque at all times, it was hard to establish any kind of flow or rhythm through the cones.

But even though there isn’t a lot of feedback, the QX50 itself does stay very stable, and responds quickly to inputs.

Last year, the Infiniti QX50 brought some new engine technology to market; just one year later, it brings more luxury and refinement to the entry-level luxury crossover segment. Infiniti has clearly been busy, and the inviting 2020 QX50 is proof.