Well, it was a long time coming. After years of spy shots, concepts, and test mules; the Jeep Gladiator pickup truck is finally a living, breathing, all-terrain thing. Best news of all, FCA didn’t fool around by simply slapping a bed on a four-door Wrangler. They’ve built the most capable midsize truck ever!

We often hear folks lamenting how little the Jeep Wrangler has changed over the years. Well, we would strongly disagree. Sure, it still mostly looks the same, but it wasn’t that long ago that the only Wrangler you could get was a 2-door. Now the 4-door Unlimited make up the majority of Wrangler sales. And this 2020 Jeep Gladiator mid-size pickup clearly signals that business as usual has come to an end for good.

Don’t think of the Gladiator so much as a Wrangler Unlimited with an open bed tacked onto the back; think of it more as a Jeep version of the Ram 1500.

FCA did start with the Wrangler frame, and cab; with mostly the same front suspension fastened to it. But then they lengthened that frame, wheelbase is up 19.4 inches, and bolted much of the Ram 1500’s suspension under its 5-foot bed. 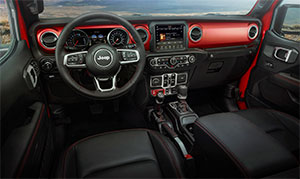 The result is a smooth riding truck that can tow 7,650-lbs. or haul 1,600–lbs. of payload. That’s tops for a midsize truck. And once you’re done blowing the doors off of the competition; don’t forget, you can actually remove the doors on this one. No other truck, regardless of size offers that.

2020_jeepMuch like the Jeep Gladiator auto show concept that was shown way back in 2005, the front end of the 20-20 edition clearly says Wrangler.

But the grille slots are wider to allow for better engine cooling. Bed depth is shallow enough that, unlike most trucks these days, you can actually reach over the side to grab stuff.

Under the hood is the same 3.6-liter Pentastar V6 found in the Wrangler, with the identical 285–horsepower and 260 lb-ft. of torque.

Four-wheel-drive is standard, with three trim levels at launch: base Sport, the Overland, and of course a Rubicon.

The Rubicon gets the upgraded Rock-Trac 4X4 system with disconnecting front sway bar, locking diffs, and 4:1 low gear ratio. Standard tires are 33s, and you can get either all-terrains or mud terrains. 35s will fit without any modifications, and Jeep even allowed room for a 35-inch spare tire. 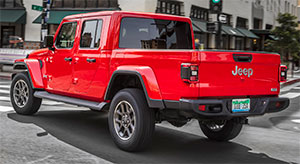 Our Northern California drive time, coincided with the high amounts of rain the area has been getting this Spring. So what was a well-prepared off-road course, turned into a sloppy mess of mud and rocks; but all the better as far as the Rubicon was concerned.

No matter what we encountered, planned or otherwise, was a match for the Rubicon’s 11.1–inches of ground clearance, 84.2:1 crawl ratio, and rock rails which they’ve extended all the way back to the end of the bed.

Further proof that they thought of just about everything; since you can remove all of the three available roofs as well as the doors, there’s a place to store all of the bolts when you remove bodywork, a lockable underfloor storage bin with multiple dividers, and the seatbacks themselves lock into place so you can even protect valuables that you stash behind them.

Rear seat space is exactly the same as the Wrangler Unlimited, which is to say better than most midsize crew cabs, but it’s still not the easiest to get into.

Up front, seats are very comfortable, and the environment is a mix of new Wrangler with old CJ flair. All materials are authentic, meaning if it looks like metal with real bolts, it is, not molded plastic.

So, while it seems like it took forever for the 2020 Jeep Gladiator to become a reality; FCA didn’t want to just show up at the resurging midsize truck party with a hastily-assembled Wrangler pickup. They wanted to introduce the most capable midsize pickup truck that money can buy. And that’s how the Gladiator rolls.