You’ve got to hand it to Kia. When their boxy soul arrived here for 2010, it was obviously designed to counter the Scion XB and Nissan Cube. Well, not only was it competitive, it drove both of those rivals out of the market. Add in a some dancing hampsters and the Soul quickly became one of Kia’s best sellers. Let’s see if the 3rd generation still has soul.

Not that any part of developing a new car is easy. But when you’re in a constant battle with rivals, be it muscle cars or pickup trucks; the goal is clear. You’ve got to one-up the other guys. However, the task for designers of the 2020 Kia Soul was uniquely different. What’s the target when you’re basically in a class of one?

Well, the first thing you do, is not screw up the vibe; that is not depart too much from the quirky style that got you here in the first place.

Well, so far, so good. This Soul is still instantly recognizable; and the only measurements that are up are overall length and wheelbase. 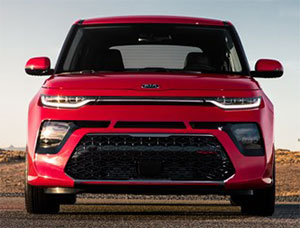 It appears wider, however; due to slimmed down lighting, and a larger 2-tone grille, that visually expands the front. The taillights also are more expressive, now almost wrapping all the way around the rear glass.

There are six trim levels, and rather than just adding equipment, they each have their own personalities; from fun to fashionable, and even off-roady with the new X-Line.

There is an all-new platform that lies beneath it all, with a new standard engine mounted to it. The naturally-aspirated 2.0-liter I4 produces 147-horsepwer and 132 lb-ft. of torque.

Stick with base LX trim, and you’ll get a 6-speed manual transmission; but most will come with Kia’s own CVT, first seen over in the Forte compact.

Output is significantly less than last year’s 2.0-liter, but this 201-horsepower 1.6-liter I4 turbo is still available for those that crave a little more. Torque production is 195 lb-ft, and it comes with a 7-speed DCT.

Storage bay space remains the same 24.2 cubic-ft. But folding the seatbacks will expand the space a little more than before to a healthy 62.1 cubic-ft., well more than most compact SUVs. 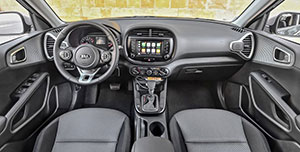 Millennials need their connectivity of course, and up to 10-inches for the in-dash touch screen will make that easy; and features such as Head Up Display are available to help you keep your eyes on the road

The biggest change we found from actually driving around on this new chassis, is much more refinement. The Soul has always been a bit of a rough ride; last gen took a small step in getting better, this one takes a much bigger step.

Stepping on the throttle of our turbo-powered test car didn’t result in as much grunt as we might have hoped, but things get moving efficiently enough, 7.0-seconds to 60.

There’s a bit of lag at launch, but once boost builds the engine starts making good power. The dual-clutch transmission does have a sport setting to quicken it up, but it’s still not much of a performance enhancer. The ¼-mile trip took 15.4-seconds at 93 miles-per-hour.

If you do upgrade to the turbo engine, along with it, you’ll get a sportier tuned suspension as well.

It was surprisingly capable through our slalom. It may look like a box, but it darts in and out of cones like a sporty little hatchback. Plenty of grip too.

Forward Collision Avoidance automatic braking is standard in all Soul trims except for LX and X-Line.

Government Fuel Economy Ratings for the 1.6-liter are 27-City, 32-Highway, and 29-Combined.

Turns out that designing a new generation of car without any true competition to guide you, is not really all that difficult. Just continue with what made the Soul so wildly popular to begin with; and keep giving fans more of it. That’s what you have here with the 2020 Kia Soul, a box full of personality that truly delivers.