Despite offering a wide range of utilities over the years, with the exception of the full-size Navigator, recent Lincolns have largely flown under the radar for luxury SUV buyers. Now, Lincoln is making a big push to change that.  Following the just revamped two-row Nautilis, is an all-new three-row Aviator. Can it become a leader in its segment?  Or does Lincoln just have their head in the clouds?

While the 2020 Lincoln Aviator is all-new, the concept isn’t. Much like the previous 2003 Lincoln Aviator that lasted for just three short years, it is basically a Lincoln version of the Ford Explorer.

Now, that’s not a bad thing. For starters, the Explorer has just gone through a wheels-up redesign, built on completely new architecture that returns to rear-wheel-drive.

Secondly, Lincoln has taken major strides to ensure that just about everything you see, feel, and touch; is an upgrade over what you’ll find over on the Ford side. 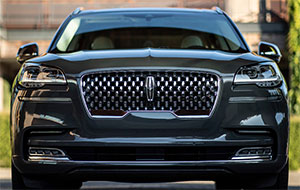 That starts under the hood, where the base engine picks up where the Explorer leaves off, the 400-horsepower twin-turbo 3.0-liter V6. It comes with a 10-speed transmission and optional all-wheel-drive.

Then, things get really interesting with a combo platter not found on any other Ford menu; a plug-in hybrid that’s based on the same twin-turbo 6. And, with the help of a 75-kW electric motor, cranks out 494-horsepower with a whopping 630 lb-ft. of torque. That’ll get this Aviator airborne in a real hurry!

It’s in the apply named Grand Touring version of the Aviator and also comes with a 10-speed automatic, but has all-wheel-drive standard.

Three rows of seating are included in every Aviator; with all except the base model sporting standard captain’s chairs for 6-passenger capacity.  If you prefer a bench seat for your brood, it’s a no cost option.

Up front, it’s all about the blending of technology with usefulness, with a standard 10-inch touch screen being the center of attention. You can even use your phone as the key to put things in motion. Materials, as well as fit-and-finish, are top notch. As is available advanced safety with Blind Spot Detection, Cross Traffic Alert, and Emergency Braking standard. 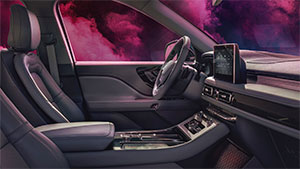 Lincoln paid extra attention to the two things you’ll touch most; the beautiful and highly-functional steering wheel, and the piano key-like toggles for gear selection. The front seats hug you a little tighter than expected, but they felt just right after a few hours.

There is some familiarity to the Explorer on the outside; but much like the Edge-based Nautilus, you know they’re in the same family, but that’s about it.

Driving in where else Napa Valley, we spent most of our time aboard the Grand Touring PHEV.  With all of that power on tap, we were expecting a more brutish delivery; but clearly Lincoln has designed it to feel more effortless than aggressive. It’s almost reminiscent of a Bentley, with big smooth power that never seems to run out or overwhelm.

As for more utilitarian matters, cargo room behind the 3rd row is a good 18.3 cubic-ft., folding it, expands the space to 41.8 cubic-ft., maxing out at 77.7 with all seats folded. 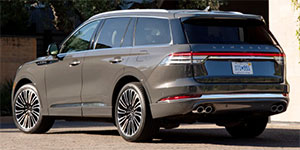 Those numbers are exactly the same in the hybrid; but there is less fuel capacity, due to the batteries taking up some of the fuel tank’s real estate. That also keeps maximum range to around 400-miles.

No official Government Fuel Economy Ratings for the Grand Touring, or Pure EV driving range yet, but just under 20-miles would seem about right.

It’s a safe bet that this new-gen, 2020 Lincoln Aviator will be in service a lot longer than three-years. Not only are large SUVs in high demand once again, but Lincoln is finally delivering what buyers in its premium three-row segment want; an honest luxury experience, combined with loads of power, and an undeniable presence.