There are performance cars that “wow” you with their modern precision, smoothness, and high-tech wizardry. And then there are performance machines like this Nissan GT-R, that come in like a wrecking ball, bludgeoning the track, and you at times, to get the job done. Now we’re not judging, we’re just enjoying the heck out of the latest Nissan GT-R.

When the long-awaited Nissan GT-R finally arrived here in the States for 2009, it was everything we’d hoped it would be. But as great as it was, Nissan has been tweaking and improving it ever since; arriving at this 2020 Nissan GT-R NISMO. 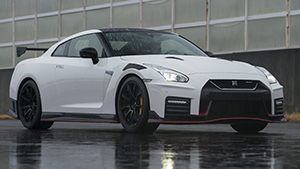 A quick recap on how we got here. The GT-R arrived with 480-horsepower from a 3.8-liter twin-turbo V6. That same engine now puts out 600-horsepower here in NISMO version, along with 481 lb-ft. of torque; thanks to upgraded turbos, the same ones found on the GT3 full-race version.

Exterior facelifts arrived in both 2011 and 2017; and through it all, the GT-R still looks menacing, but in an anime graphic novel sort of way.

Additional upgrades to the NISMO, or Nissan Motorsports version, are strictly performance oriented; including increasing airflow to the engine and brakes; along with comprehensive weight saving measures like carbon fiber for most body panels, rear spoiler, and even the roof.

Hop in, and it’s immediately invigorating to drive something so fast with such antique driving aid electronics. It’s pure fun, and you feel like you’re always the one in control.  The seats hold you in tight when cornering, but are still very comfy. 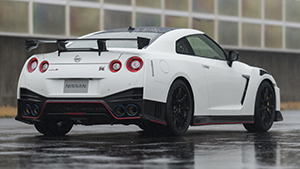 Of course there are certain things you sign up for with a GT-R like noise coming from the turbos, exhaust, and seemingly every mechanical mesh point; and even in comfort mode, it’s a rough ride.  But, in the words of Clark W. Griswold, “It’s all part of the experience, Honey.”  And, all is forgiven when you launch this thing at a race track.

Between the all-wheel-drive setup and sticky tires, there’s so much grip at launch; it just hunkers down for a second and then literally explodes off the line to 60 in 3.3-seconds.

Enjoy it while you can, as the sheer brutality of launches are such a stress on the mechanical bits, you only get a couple full-on attempts before you are warned to let it cool down. But what beautiful takeoffs they are.

Transmission remains a dual-clutch 6-speed automatic, which force-feeds gear changes with hammer-like precision; and it’s all accompanied by so much glorious mechanical noise that it feels like you’re going twice as fast as what you are.  Our best ¼-mile time was an 11.4 at 125 miles-per-hour. 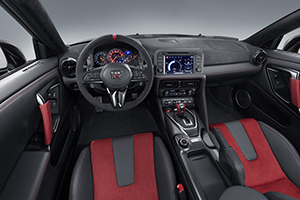 Originally designed with setting Nurburgring lap records in mind; a slow speed slalom course does not give you a true sense of the NISMO’s capabilities, but does reveal a tendency to understeer ever so slightly when adjusted to its harshest settings.  There’s virtually no body roll, and steering is very quick; with great feedback through the wheel.

The Bilstein DampTronic shocks have been re-tuned, mostly to compensate for the weight loss; and new Dunlop tires offer even more grip than before.

Expectedly, everything inside looks and feels a bit dated; but that’s just added charm for this unique machine.

NISMO highlights are red trim and stitching throughout the cabin, and a near-perfect 3-spoke steering wheel.

GT-R and NISMO are almost synonymous. Both speak to the best through 50-years of Nissan performance. Put them together, and the 2020 Nissan GT-R NISMO is one special vehicle.  It’s a fun and immensely capable track car that manages just fine on the street.  It may be an analog dinosaur in a 5G broadband world of supercomputers masquerading as exotic supercars; but that’s exactly what makes the GT-R NISMO exceptional.