Unless you're headquartered in Detroit; the full-size pickup truck segment is a tough place to call home. Now Toyota has been the most successful at making inroads with their Tundra, but Nissan’s Titan is labored to be seen as a serious player.  Now, that doesn’t mean they’re not trying harder, with an updated 2020 Titan.

2020 will certainly go down as one of the most “interesting times” in the history of the world. Most things as we know them have significantly changed. So, you could say this updated 2020 Nissan Titan fits right in.

We first met the Titan when it arrived on the full-size pickup scene for 2004. It showed up well-equipped, with standard V8 power, almost a foot more length than the Toyota Tundra, and a host of well thought out features.  We praised its spacious and modern cabin; and noted the all-aluminum V8 was ready for some heavy work. 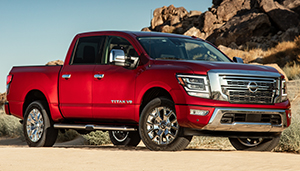 That truly must have been the case, as 16 years later, it’s still getting the job done.  Now well into the Titan’s 2nd generation, which arrived for 2016, the Endurance 5.6-liter V8 gains 10-horsepower to a nice even 400.  Torque gains are more significant, jumping from 394 to 413 lb-ft.  Other brands may have more powerful options available, but that’s the most standard horsepower you’ll find in the full-size truck ranks.

With more power from the engine and more gear ratios in the transmission, we had high hopes heading to our test track. Nissan didn’t mention a new exhaust system to go along with it, it sure sounds a little raspier to us; with noticeably more low-end grunt.

But, that didn’t translate to faster times. It felt quick off the line, as the rear tires hooked up fairly well, and power starts to really come on when it hits 2nd gear. Still, our 0-60 time of 7.7-seconds was 4/10ths slower than our last Titan 4X4 test.

Smooth and quick shifts from the 9-speed make up some of that time through the quarter; 16.0-second at 94 miles-per-hour; just 2/10ths off from before.

Like most everything else with an empty bed on the back, there’s copious body roll and a lightness to the rear end.  But, overall it was not too shabby through the cones. Steering was heavy and offered a good amount of feel. 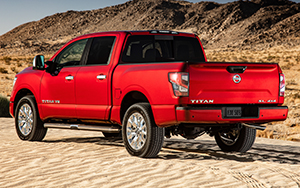 An average stopping distance of 128-feet from 60 is not bad at all for a full-size pickup.

This update also means some exterior enhancements. New LED lighting all around, including in the bed, different wheel designs, and a freshened front bumper. The grille gets a new look as well, or looks actually, as all trims get their own unique theme; which means lots of chrome for our SL tester.

The SL and top Premium Reserve trims come as Crew Cabs only with a 5½-foot bed; base S, SV, and off-road ready PRO-4X are available with extended King Cabs and a longer 6½-foot bed. Following a disappointing trend for truck makers, Nissan has eliminated the Regular Cab Titan.

The available tow package for our SL 4X4 makes sure you can safely pull the maximum of 9,210-lbs. Stick with 2-wheel-drive, and you can up that to 9,350-lbs. 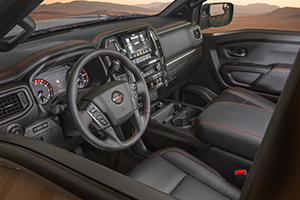 Titan is also a leader when it comes to standard safety; their Safety Shield 360 includes Automatic Emergency Braking for both front and rear.

Letting more of the outside in, is a larger available moonroof. Otherwise, fewer changes to the overall comfortable interior that looks and feels a little behind the times compared to the big-3, which have all gone through extensive redesigns recently.

Depending on trim, you’ll get either an 8 or 9-inch touchscreen for infotainment; again, not as massive as some rivals, but as with the engine, no one has a larger standard screen.

Government Fuel Economy Ratings for the 4X4 are 15-City, 21-Highway, and 18-Combined.

Expectedly, that’s a much worse than average Energy Impact Score burning 18.3-barrels of oil yearly, with 8.5 tons of CO2 emissions.

While on the surface, it appears Titan base pricing has taken a huge jump; it’s mostly the result of eliminating the Regular Cab version. A base S King Cab starts things off at $37,785, with top Platinum Reserve Crew Cab coming in at $57,085.  Four-wheel-drive is $3,200 more.

While the jury is still out on Nissan becoming a serious full-size truck provider in the U.S., the brand just announced they will end Titan sales in Canada this year. We hope that is not an omen for us. Because, if you’re looking for an alternative to the big-3, with rugged looks and the ability to back them up, the 2020 Nissan Titan has mountains to offer, and is seriously worth a close look.