At one point in time, the Nissan Versa was the least expensive car you could buy in America. Well, that’s no longer the case. Indeed, as it starts a 3rd generation, its apparent mission is to bring a whole new level of refinement, technology, and excitement to the economy car class. Now if it succeeds, that could make it an even bigger bargain than before.

While for the most part, Nissan has not been able to match Honda or Toyota when it comes to compact and midsize 4-doors; their Versa subcompact sedan has been a leader in its segment for some time. And an all-new version for 2020, aims to keep that in place.

Always a little bulbous and chunky-looking; this 3rd generation Versa loses the jellybean curves. In their place, are sharper lines and exaggerated fenders that give it a slimmed-down look, despite hitting the new-gen trifecta of being longer, lower, and wider. 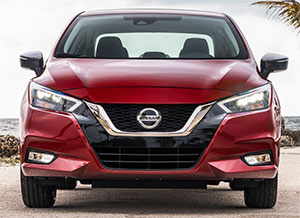 Yes, they insisted on applying Nissan’s recent hallmarks of a V-motion grille and floating roof. The front end looks good; the floating roof however, appears a little forced.

They made a point of filling up the wheel wells, whether you get the standard 15-inch steelies, or these optional 17s. That alone has gone a long way towards giving Versa a much more modern look.

It’s no secret that previous Versa’s have put a higher priority on price point than driving enjoyment; and while we’re not talking sport sedan here, response has vastly improved.

Though the Versa remains the smallest car in their lineup here, it’s statistically a compact, and inside it even feels more like a midsize; reaffirming yet again to us, why midsize family cars are in a slump. Yes, people are defecting to SUVs there’s no denying that, but they’re also finding the amount of space and even comfort features they’re used to in smaller cars.

It doesn’t exactly feel all grown up in here, but certainly less entry-level than before. Materials are much nicer and the copious amount of real controls feel more substantial to the touch. Plus, just about everything is where you expect it to be. 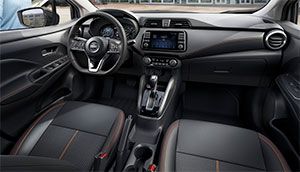 Front seat passengers do get more space than before, but rear seat passengers actually loose a little, which is a shame as that was a real highlight of previous Versa’s. Cargo space remains quite good, 15.0-cubic-ft. in the trunk.

The standard naturally-aspirated 1.6-liter I4 that powers the Versa is not new. But it has been updated for 2020; cranking out 13-more horsepower and 7 more lb-ft. of torque than before, for totals of 122-horsepower and 114 lb-ft.

Here in our test car, it’s connected to a CVT, but a 5-speed manual is still available if you stick with base trim.

The CVT has received some updates as well. We actually can’t say we’re in love with it, but its quicker response and increased smoothness are certainly appreciated.

Despite the additional horsepower, our Versa SR-trimmed test car was actually slower to 60 than last gen, taking a lengthy 11.3-seconds to get the job done. But it was noticeably smoother. There are simulated shifts in the CVT which don’t really accomplish anything other than impeding your momentum, and perhaps giving you the sound of a traditional automatic. Best 1/4-mile time was 18.6-seconds at 75 miles-per-hour. 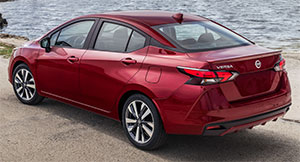 On that safety front, base S trim does include Automatic Emergency braking, but all other trims get the full Nissan Safety Shield 360, which adds lane departure and blind spot warnings.

Now, efficiency has always been a Versa strongpoint; that continues here with Government Fuel Economy Ratings of 32-City, 40-Highway, and 35-Combined.  We averaged a good 34.5 miles-per-gallon on Regular.

In some circles, “very nice” may not sound like high praise.  But the 2020 Nissan Versa is indeed very nice whether you’re comparing it to subcompacts, compacts, or even midsize sedans. It may not be the cheapest car you can buy anymore; but it’s a more than competent commuter, and for us, a far greater value than ever before.