We start with a question: how new is new? It’s actually a constant debate around the car biz, and our shop, when it comes to Porsche’s iconic 911. Over 55-years and seven generations, each “new” 911 always seems to be refined, more than reborn. And here we are with the eighth gen 911 ready for the road. So, is it just another notch upward, or has the world’s quintessential sports car achieved a new level of “new”.

While the “how new is new?” debate will likely continue for as long as there’s a 911, or at least until an all-electric one shows up. Porsche, at least, thinks this 2020 911 is “new” enough to deploy a new 992 nomenclature, even though the basic platform is largely carryover from the 991.

There is nothing drastic about this 911 change; no switching from air-cooled to water-cooled. But, there is a lot new about the rear mounted flat-6 powertrain including new twin-turbos, intercoolers and exhaust manifolds. Turbos are larger so compression is higher. 23 added horsepower ups the total to 443, with 390 lb-ft. of torque.

A PDK with 8 tightly spaced gears is new to the 911; taken from the Panamera; with a new shifter that reminds us of an old-style microphone. No manual at launch, but a 7-speed gearbox will come. Likewise, a hybrid version arrives not too far into the 992 lifecycle. 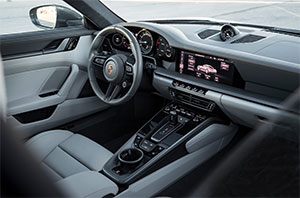 For now, just 2-models, our Carrera S, and all-wheel-drive Carrera 4S. But convertible and base Carrera models are in the wings.

Your first impression is that styling has evolved little. Maybe, but it has changed enough for us to use the world “beautiful” for the first time in a 911 road test in like forever. Its sleeker, more elegant, more supercar like. Yea, beautiful fits.

Like every previous 911 gen, the new car does grow in size, with wider front and rear tracks. Standard wheel sets are now 20s up front, 21s in rear. Rear tires are the widest ever on a standard 911, 305s; yikes that’s a lot of rubber hitting the pavement.

Ensuring they’re planted into the pavement as much as possible, a larger rear spoiler is in place. But, that’s just one of this active spoiler’s tricks; in addition to providing downforce, it also channels air into the updated engine cooling system, as well as having an eco-position to reduce drag.

There’s more aluminum in both the chassis and the body; but they didn’t manage to take any weight out, actually tacking on another 150-lbs. or so. But unlike before, you do get the same wide body style whether you get rear or all-wheel-drive.

When it comes to driving, many Porschephiles will claim their 19-whatever is better, and they’d be wrong. This 992 is superior by every measurable category, and a few that aren’t measurable.

Steering has been quickened to razor sharp levels, and you can engage the rears in the process optionally, as well. Familiar MacPherson struts up front, with a multi-link rear, but dampers are new, and of course the PASM active management of them has been upgraded.

You can talk specs and differences all day long, but the fact that this 911 is just pure bliss on a winding road is what matters most to us.

That’s where you’ll also appreciate the new and far more modern 2+2 interior. Besides the big dash touchscreen, also lifted from the Panamera, we were surprisingly quite fond of the mostly digital gauge package. Mostly, as Porsche properly kept a real needle and dial for the center tach. Classic 911 touches like a left hand starter switch, and manual fore-aft seat adjustments remain.

We found the driving experience was more fun, and noticeably improved, on the Summit Point Circuit at Summit Point Motorsports Park. We spent a full day there trying to find limits of grip. With Drive mode in Sport Plus, steering response is immediate, with excellent feedback. Plentiful torque available at all times to push you through corners, with no noticeable turbo lag.

Plenty of braking power as well, whether you upgrade to carbon ceramics or not. Our rear-drive Carrera S did not have them, but we did have the upgraded Sport Suspension which lowers things about 10mm.

The new PDK works great as always, providing rapid shifts right at red-line. Though the revised ratios did throw in a mid-corner upshift here and there we didn’t expect.

But, like an old trail horse, it seems to know its way around the track better than you do, with lots of tech doing all the hard work behind the scenes.

So, how new? We say, new enough to be new! Both in hardware and in spirit. Think of the 992 as a modern masterpiece where engineers have been chipping away the 911 stone for over 50-years. Porsche, being Porsche, will steadily unveil a virtually limitless number of variations on this theme over the next 6 to 7- years, but you really don’t have to wait; as this 2020 Carrera S, is pure perfection.