Being the proud performance-oriented brand that they are, Porsche could only sit back and watch Tesla parade around at ludicrous speed for so long. Time for them to enter the full-EV business in a big way, a way that only Porsche can. So let’s head out onto the track with the Taycan Turbo S.

There are many thoughts that go through your head when you enter a race track property behind the wheel of a high performance car. Usually, “where am I going to plug this thing in?” is not one of them. But, here we are at Roebling Road Raceway near Savannah, Georgia with the all-electric 2020 Porsche Taycan Turbo S.

But before we get too far, we need to better inform you of what exactly it is we’re driving here.

The Porsche EV journey of course, started with the Mission E Concept of 2015. And over these last 5-years, Porsche has assembled the crème de la crème of electrified automotive performance sedans. 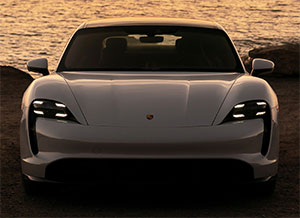 Powertrain setup is not that unique from other EVs; two-motor arrangement, one up front, one in rear, providing all-wheel-drive with up to 670-horsepower in the Taycan Turbo. This Turbo S cranks things up to 750-horsepower, with 774 lb-ft. of available torque.

That’s right, Turbo has become more of a model name in the Porsche world, not so much a descriptor of what’s under the hood; so using the name here is not that much of a stretch.

There is some uniqueness with the Taycan; as it is the first EV to operate on an 800-volt system, which allows you to get to 80% charge in as little as 22 ½ minutes. And, there’s a 2-speed transmission on the rear axle; providing ultimate acceleration when launching, and higher efficiency when cruising.

Slightly less if you’re doing ¼-mile runs like this. The Turbo S launches with a sheer brutality that makes the Nissan GT-R seem tame. Power delivery is just relentless. It feels like you’ve just left the line, when you glance down and your already approaching triple digits, after clearing 60 in 2.8-seconds. 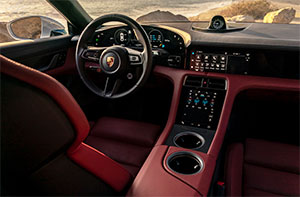 No gears to change, no tach to monitor, just hold on for dear life as you finish the ¼ in 10.9-seconds at 129 miles-per-hour. There is some sound enhancement in the cabin, but it’s not fake vroom, vroom engine noises you’re hearing; rather the actual sound of the electric motors amplified. We were divided on its merits; some thought it sounded cool, others said they would prefer silence. Regardless, metal pushing through wind is all bystanders can hear.

Now, back to that familiar Porsche feel. Yes, amazingly, despite the length and weight of the Taycan, somehow the experience behind the wheel is not that different from a 911.

Sure, you do feel the heft in turns, and sometimes when you let off the throttle it still wants to surge on; but the enormous and standard Ceramic Composite brakes behind the 21-inch wheels are phenomenal, and keep you from getting into any trouble.

It will push a little in corners, as all of the grip keeps the rear planted at all times; but the sheer amount of torque you can apply coming out of turns is borderline mind-boggling.

4-wheel steering is available in the Turbo, standard here in the S, and it really helps on turn-ins. Overall feel through the wheel is not quite as sharp as a Panamara, but far from the “video-game” controller feel of most other pure EVs. 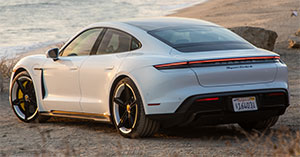 Much like the driving experience, the exterior design is all pretty typical Porsche…but even more beautiful.  Aero treatments include an active rear spoiler, rocker extensions, and rear diffuser. And, there are actually two charge ports, one on each side depending on what you’re plugging into. Finally, the standout 21-inch wheels on our test car were sporting Good Year Eagles.

The interior is not as futuristic as you might expect; again, more of the accustomed Porsche vibe. The biggest evolution being the large curved-glass gauge panel.

Government Fuel Economy MPGe Ratings are 67-City, 68-Highway, and 68-Combined. For a near perfect Energy Impact Score, using just 3/10ths of a barrel of oil per year, with no CO2 emissions.

Taking just about everything they’ve learned over their 70-years as a brand, pushing it into the future with new technology, and cramming it all into one vehicle, is what the 2020 Porsche Taycan Turbo S is all about. And this is just the start of Porsche E-Performance, as they’ve already confirmed a Cross Turismo, and hinted at much more to come down the road. The times they are indeed a-changin’, and never have they changed, or charged, faster than with the Taycan.