8-years is a long time for a vehicle lifecycle these days. But that’s how long the first gen Land Rover Range Rover Evoque has been around. One reason, it’s look was clearly ahead of its time, and it’s a look that’s still more modern than most of its compact luxury crossover rivals. But to some it was still too much form over function. So let’s see if the all new second generation Evoque changes that reality.

The Range Rover Evoque has always been a looker. But now that it has everyone’s attention; for its long anticipated 2nd generation, Land Rover focused their attention on putting a lot more functionality into the 2020 edition.

Not that they’ve neglected Evoque’s breakout styling. Land Rover calls the new direction “reductionist”, which is to say they kept the same basic sloped floating roof and high belt-line, but essentially took a buffer to it, reducing most of the sharp lines and angles of the original.

The overall footprint remains almost the same; just a few millimeters of wheelbase stretch. Yet, they were able to reconfigure and make a better interior package. It’s not quite Tartus-like inside, but there’s noticeably more legroom for back seaters. 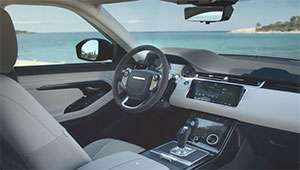 The space is clean and uncluttered looking, with most controls falling readily to hand, and of course materials are prime plus “eco-friendly”.

Tech upgrades include a Clear Sight Ground View camera that allows you to see “through” the front of the Evoque for navigating tricky off-road situations. And, a Clear Sight HD rear view mirror; so you can pack the cargo area full, and still be able to monitor your “6”.

Doing so, will mean you’ve got 21.5 cubic-ft. of stuff; folding the rear seatbacks will expand the space to 50.5 cubic-ft.

The latest version of Land Rover’s InControl Touch Pro is available to handle multimedia duty; and there’s more front storage space for all the things we seem to bring along these days. 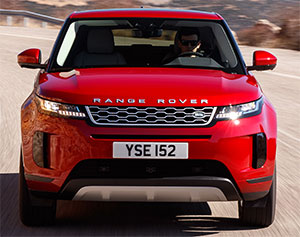 There’s new tech under the hood as well. Output from the base 2.0-liter I4 turbo is 246-horsepower. That’s up 4% over last year; torque output jumps even higher, at 269 lb-ft. up 7%. But, choose the optional 48-volt mild hybrid system and you not only boost around town efficiency, but add 50-horsepower as well.

Our first drive was not exactly the toughest assignment we’ve had recently; exclusive front seat time in Greece.

“The Evoque is all-new for 2020, and it’s a much more refined vehicle in terms of ride and handling and interior noise. They’ve strengthened and stiffened the body structure in key areas like suspension mounting points so it soaks up bumps better. We tackled some pretty challenging off-roading through the olive groves here in Greece, and with a full complement of terrain response systems, it’s pretty capable. The Evoque may have a pretty face, but it’s no cute-ute.”

That more substantial presence, comes courtesy of a new Premium Transverse Architecture; and it goes a long way towards making the ride a lot less choppy than before.

Not only is all-wheel-drive standard, but Land Rover’s Terrain Response 2 is available in the Range Rover Evoque for the first time. It does a remarkably effective job of maximizing available traction in just about every situation.

The only thing that hampered the whole process was an occasional inopportune thrust of turbo boost, just when you’re trying to be easy on the throttle to navigate through a delicate situation. 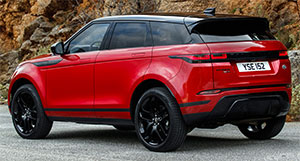 While it doesn’t have the ground clearance of other Land Rover products, we still forded streams, drove through deep ruts, and bounced along rocky paths and dirt roads without worry. Feeling very comfortable while doing so, with no teeth-rattling thumps through the suspension.

The Highway ride was equally composed, with very little wind noise seeping into the cabin.

We spent much of time with the base 2.0-liter, and found power adequate; but not exactly effortless at higher speeds. The mild-hybrid managed much better.

Government Fuel Economy Ratings are 20-City, 27-Highway, and 23-Combined; the mild-hybrid does one better in the city, but one worse on the highway. That makes for an Average Energy Impact Score; 14.3-barrels of yearly oil use, with 6.4-tons of CO2 emissions.

Few SUV lineups are as instantly recognizable as that of Range Rover, and the 2020 Evoque continues to be the tiny terror that sticks out the most. Yes, it’s now a little more practical, and has legitimate off-roading chops. Still, it’s the Evoque’s ability to cram Range Rover luxury and Land Rover capability, into a tiny, beautiful, cohesive package that makes it again a winner for us.