These days, everything in life seems extreme.  But in the automotive world there are few things as extreme as a Rolls-Royce SUV.  It’s called the Cullinan, and it’s looking to take the Rolls-Royce brand, and its owners, to places they’ve never been before.

This 2020 Rolls-Royce Cullinan has been years in the making.  But, Rolls-Royce didn’t want to rush things as they knew a lot would be riding on this vehicle, and needed it to be truly worthy of the double “R” name.

That required, for starters, heavy modifications to the aluminum Phantom chassis that it shares. 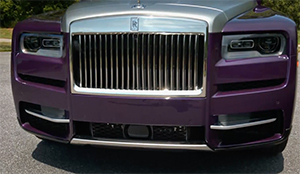 And despite its very full size; it’s almost as long as the new Tahoe; designers were able to make it clearly a Rolls. You may struggle to see its beauty, but it sure has presence.

The face clearly says modern Rolls. The nose is tall and almost flat, with a hideaway Spirit of Ecstasy leading the way.  While the silver satin finish on this Twilight Purple Cullinan’s bonnet, is an optional way to pay tribute to the brand’s heritage. The rear is also modern, if a bit generic, making up in stance what it lacks in distinction.

The centerpiece of it all, is expectedly a fantastic twin-turbo V12 engine. It of course started out as a BMW design, but totally built by Rolls, with their own materials, and their own immense 6.75-liters of displacement.

Power is also; 571-horsepower and 627 lb-ft. of torque, more than enough to get the Cullinan up to speed in a hurry; precisely, 4.5-seconds to 60. Don’t forget, Rolls has a long history of making things fly.

An 8-speed automatic transmission is standard, as is all-wheel-drive, but it works mostly with traction control style selective braking more than shuffling power around.

As for off-roading, yes you can do that, the Phantom’s rear steering system is updated for even more turning. Rather than terrain style drive modes, just select off-road, and the Cullinan knows what to do from there.  Side body protectors are designed to keep the harsh things of this world from damaging the Cullinan’s hand-crafted body. 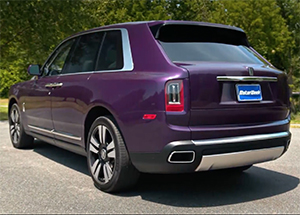 For pavement, there’s an air suspension of course; and it delivers the magic carpet ride that you’d expect, aided by a camera that reads the road ahead and primes the suspension for what is about to happen.  Yeah, it does that.

For as big and heavy as it is, over 6,000-lbs; driving it, is graceful and largely uncomplicated. You’re locked away in bank-vault solitude; feeling invincible and that you could conquer anything. Which of course, is a big part of the appeal.

Rolls-Royce knows that their buyers typically don’t like to be bothered with physically operating things; so processes are electrically powered from top to bottom.  You can even close the doors with yes, just a touch of a button.

Not to mention, hidden away in the cargo bay, is this cool tailgating setup; perfect for pre-gaming the polo match. It does rob a little bit of the 21.1 cubic-ft. of luggage space though. 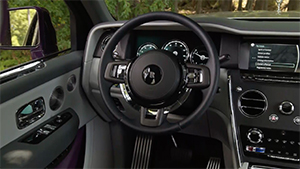 Opulence and hand-crafted precision are the general themes to the interior.  With the usual Rolls-Royce staples such as plush carpeting, wood surfaces, exquisite leather, door-mounted umbrellas, and rear-opening coach doors.

Much like the largest diamond ever discovered, which the Cullinan is named after, there truly is nothing else like it on the road, and an absolute British Crown Jewel.

Government Fuel Economy Ratings are not for the faint of heart; 12-City, 20-Highway, 14-Combined. Our average, 15.4 Miles-per-gallon of Premium.

So, it’s easy for us commoners to look at this 2020 Rolls-Royce Cullinan as a bridge too far, or perhaps the whole SUV thing taken to unbelievable extremes.  But, don’t think about that. Do appreciate the fact that it is an amazing piece of precisely targeted automotive engineering that looks, feels, and acts exactly like you would expect from a Rolls-Royce SUV.