Like many Asian carmakers, Subaru always seems to be holding something back from us. For years, we couldn’t get STIs here in the states. And after finally relenting, Subaru still kept the upgraded S-line of high performance goodies from us. Until now that is. And if that weren’t enough, this S209 is also the most powerful STI ever. So, let’s taste this forbidden fruit, and find out if it was worth the wait.

The story of the 2020 Subaru STI S209 is not a new one. We’ve been down this road before, going back at least to the 22B we tested 20-years ago. Subaru has super special performance car not available to us here in the U.S. Finally, they relent, we enjoy it, only for another better one to pop up, but not for our consumption.  Lather, rinse, repeat.

So, let’s get right to what makes the S209 so special.  Well, it’s the first S-line Subaru to be offered here in the U.S. And, in an interesting turn of events, all 209 units that will be built, are allocated exclusively for us here in the states. Hmmm… we can hear the Japanese enthusiasts now… 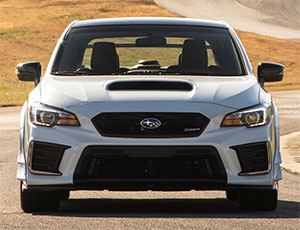 Additional power is not always the case with these Subaru deals, so we were glad to see some extra ponies show up under the hood.

It’s the same EJ25 2.5-liter horizontally-opposed 4-cylinder, but an HKS turbo with larger turbine and compressor, dials up the boost pressure and the potency to 341-horspower and 330 lb-ft. of torque. Better yet, that additional torque is all in the midrange, which is where you want it for track work.

Manual transmission only with the 209; the 6-speed gets a short throw shifter that makes it very quick and easy to operate, but could be a little more positive.

Despite the added power, the throttle is not touchy or overly sensitive, but the high performance clutch does have a high take up, which makes it hard to get a feel for.

And like every STI before it, some clutch slipping is required to get off the line quickly. We hit 60 in a rapid 4.7-seconds. Banging through gears and listening to that turbo whistle as we worked through the 1/4–mile in 13.4-seconds at 105 miles-per-hour.

And from the “you don’t see that everyday department”, there’s an intercooler water spray system, which you can manually trigger with steering wheel paddles, to lower intercooler temperature. 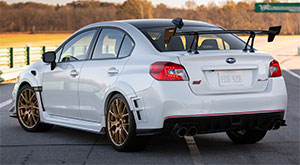 In addition to the ginormous rear wing, which robs as much visibility as downforce it creates; other performance enhancing eye candy includes wider fenders. Venting in the front allows hot engine air to escape, while the vents in the rear fenders perform the dual task of reducing drag and increasing downforce. And there is of course, lots of special badging.

Lightweight 19-inch wheels are unique and wear Dunlop Sport Maxx tires. The S209 is only available in Rally Blue or this Crystal Pearl White.

As for track work, the S209 is light as feather, but stiff as a board. All that suspension tweaking does make for a WRX that turns in with precision.

The SI-Drive system has been recalibrated to handle all of the additional grip, and Subaru actually recommends that you avoid Sport Sharp for track work, as the softer throttle response of Sport enables better control. We tried both, and while difference in feel between the two is noticeable, we found them both equally effective.

This being a Subaru, all-wheel-drive is standard of course, with limited slip differentials on both ends. And, you can manually adjust the center diff to choose where to send power. 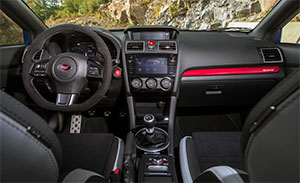 And unlike any STI we’ve had before, that power felt more than plentiful throughout most of this track, with a nice flat midrange obvious when coming out of corners. Though you do have a little too much downtime on the very long straight here at Roebling.

It helps with gearing as well, no reason to downshift as much as you may be accustomed to; as there’s plentiful boost power to keep up your momentum.

All this, and you still have an interior that’s easy to live with on a daily basis, and even a rear seat to take your buddies along.

Now, if you’re looking for negatives, all the suspension alterations have taken a toll on the turning radius. So, while it “Cuts Like a Knife” on the race track, it wants to give it to you “Straight from the Heart” on the street.

Now, for those of you that have been pestering Subaru for a real deal S-line here in the U.S., it’s time to pony up the pesos, or $64,880 American dollars to be precise. Making it one expensive Subi.

But, not only did Subaru finally oblige us with an S-line model here, it did one better by making one exclusively for us. So, naturally it had to have more power, but the 2020 Subaru STI S209 is much more than that, it’s a limited edition highly capable Sport Sedan that is the pinnacle of current Subaru performance. And it’s only for us; well, at least for now.