Say what you want about Tesla, they’ve staked a remarkable claim on the automotive landscape in little more than a decade, and have certainly pushed traditional car makers to take both them and fully electric vehicles much more seriously. Their latest land-grab attempt is in the wildly popular small SUV Segment, with the 2020 Tesla Model Y. 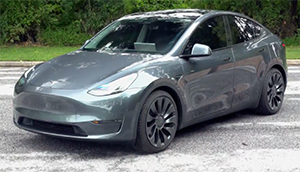 Tesla is yet another brand that didn’t even exist when we started this whole thing 40-years ago. And in order to garner as much attention as possible, they didn’t burst onto the scene with a practical 3-row utility, but the high-performance Roadster. Available from 2008-2012, this Lotus-based, carbon-fiber bodied 2-seater was a high voltage shock to the automotive world; offering not only a fast and futuristic driving experience; but range of well over 200-miles. And showed what creative minds and entrepreneurial savvy could accomplish.

This Model Y, is of course based on the Model 3 sedan; making it much smaller than the Model X SUV. And, is currently available in 2-versions; Long Range AWD, and Performance. Both feature the same dual-motor all- wheel-drive system, with a combined output of 384-horsepower and 376 lb-ft. of torque and an 80.5-kWh battery pack; but the Long Range prioritizes getting the most out of the batteries for a 316-mile range. Performance cranks the motors up a bit, getting to 60 more than a second quicker, and only sacrifices 25-miles of range to do it; with a 291-mile range.

Performance also adds 21-inch wheels, and a 20 miles-per-hour higher top speed of 155. As for styling, there is not much to look at, particularly up front, where the lack of a traditional grille is exaggerated by the smooth face. Things get better as you head rearward where the “Y” improves upon the sedan with a tall hatchback shape.

Inside, it’s incredibly roomy; seating for 5 is standard, with a 2-place 3rd row an option. Rear seats are entered through traditional doors, not the Model X’s falcon-wings. Trunk space is very usable, with 2nd row seatbacks folding to provide a great 68.0 cubic-ft. of cargo space. There’s some additional storage room up front under the hood, as well. 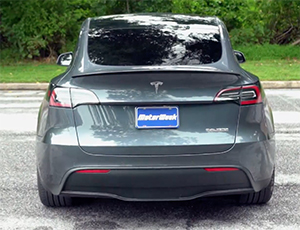 Similar to every Tesla before it, and exactly like the Model 3, the Model Y is both minimalistic and futuristic inside, as basically everything goes through the horizontal dash-mounted 15–inch tablet. It can be quite a distraction your first few times behind the wheel; but eventually, you learn to quickly do what you need to do.

But no matter how much seat time we had, we couldn’t get used to not seeing a traditional instrument panel directly in front of us, and fit-and- finish is still a work in progress for Tesla. The experience behind the wheel is what’s really most important, and the Model Y greatly succeeds here; but don’t just take our word for it, Philip Garner is a Model Y owner...

Phillip Garner: "The best thing that I like about the Tesla is the fact that it is so smooth. There’s no vibration and when you go, you go, and it’s fast and it’s stable. It just feels like it’s planted to the ground and I just love the feeling of that safety feeling of that.”

Of course track performance has become a hallmark of Tesla, and the Model Y does not disappoint here either. It pushes off the line with an immediate flow of power to pavement; and you can feel the unleashing of torque in every part of your body, as you launch to 60 miles-per-hour in just 4.2-seconds. 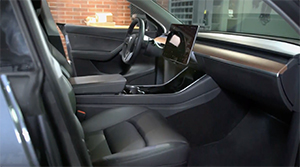 It’s almost disconcerting as all of the audio cues you’re used to are non-existent, just unrelenting power delivery with the gentle hum of the electric motors. And after clearing the ¼ in 12.5-seconds at 114 miles- per-hour, the Model Y feels like it’s just getting going. While we fully expected all of that, we did not expect the instant response and credible feedback from the car through our slalom course.

Balance was perfect, with no understeer or oversteer; just plenty of grip, and clean run after clean run through the cones, with only a little more top heaviness compared to the Model 3. Plenty safe and stable under heavy braking; just 95-feet was all that was required for panic stops from 60. Government Fuel Economy MPGe Ratings are 116-City, 106-Highway, and 111-Combined

For a near perfect Energy Impact Score of just 0.2-barrels of yearly on consumption, with zero tailpipe CO2 emissions. Pricing for the Long Range AWD starts at $51,190; 10-grand more for our Performance model, at $61,190.

Tesla vehicles in general, and this 2020 Model Y in particular, are not for everyone; but Tesla continues to innovate, and has delivered a whole lineup of fully-electric cars and SUVs, while EVs still remain a relatively low priority for most traditional car makers. The future is here, and it’s driving a Tesla.