If you’re familiar with Toyota racing development, it’s probably because you’re a fan of off-road trucks, or maybe you follow Toyota’s championship winning NASCAR teams. Well, now Toyota is spreading a little of that high performance love around to some very unexpected places.

Toyota has been racing cars and trucks in NASCAR for 15-years now, but other than marketing, there didn’t seem to be much benefit trickling down to the average Toyota customer. Now, this 2020 Toyota Camry TRD is not exactly Kyle Busch’s championship Camry, but it is a far cry from your neighbor’s.

Okay, maybe not so far, but let’s find out what causes at least a few degrees of separation. And, that’s because the updates are thankfully more than just superficial.

Mechanical upgrades start with underbody bracing, and also include firmer springs and shocks that reduce ride height by about a ½-inch. 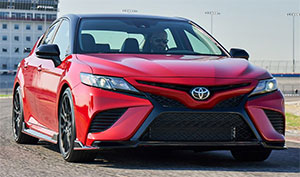 Nothing new to report from under the hood however; the Camry’s optional 3.5-liter V6 comes standard here, outputting the same 301-horsepower and 267 lb-ft. of torque. But, it does get a cat-back dual exhaust system that gives is a little more bark.

And there was plenty enough bite as well, making us deal with lots of wheel spin off the line. Patience is key, getting things rolling a little before you go full throttle. 0-60 was a most acceptable 6.5-seconds.

An 8-speed automatic manages power flow to the front wheels, and shifts are quite smooth. Power stayed strong throughout the 15.0-second ¼-mile, which we finished at 98 miles-per-hour; with a nice aggressive exhaust note.

We were much more impressed with the TRD in our slalom course. There’s virtually no understeer or oversteer; a big improvement over the standard Camry, and both chassis and steering response were quicker than any Camry we’ve driven. A nice tight feel throughout, with only a little body roll. 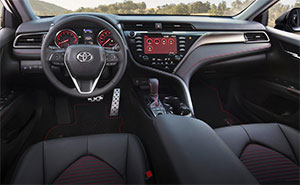 Frankly, nothing else in the mass market family sedan segment comes close. You’d have to look to traditional sport/luxury brands to find a comparison.

As for the new brakes? Yeah, they’re the real deal too; bringing us to a halt in a very short 94-feet from 60, staying straight and true, stop after stop.

Now, if all of this sounds good to you, but you need more comfort and space, an even bigger surprise, it’s this Toyota Avalon TRD. It seem’s Toyota’s “Lexus lite” Boomer Cruiser took a wrong turn through the TRD parts department, and we love it!

Something about it just seems so wrong, it’s right. The Avalon of course shares the Camry’s chassis, just stretches the wheelbase a bit; so it gets all of the same updates underneath.

And somehow, its exhaust sounds even more aggressive than the Camry’s. 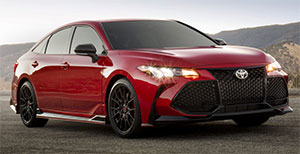 And speaking of aggression, it says a lot about these TRDs, when we’re just now getting around to talking about the styling.

Yes, both the Camry and Avalon get the full aero treatment; with enough add-ons to make your teenager look twice, and perhaps get a little envious. “Cool Camry, bro!”

That means front splitters, sill extensions, and even a full wing on the Camry’s deck lid; while the Avalon keeps it classy with a subtler rear spoiler.

Interior changes are less comprehensive, but still get the message across. Red stitching resides throughout; as do TRD logos, and even the seatbelts are red.

Up front, both Camry and Avalon get Black SofTex Sport seats, but again, Avalon takes it up a notch with Ultra-suede inserts and added heat. 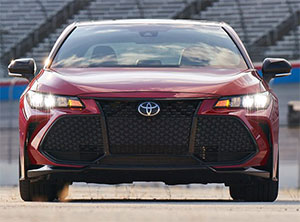 Government Fuel Economy Ratings are the same for both TRDs, 22-City, 31-Highway, and 25-Combined. We averaged 23.7 miles-per-gallon in the Avalon; a better 25.5 in the Camry; both on Regular grade. The Energy Impact Score is average for all vehicles; 13.2-barrels of yearly oil consumption, and 5.9 tons of CO2 emissions.

The best part of the Camry TRD story, we’ve saved for last. Pricing is just $32,125. That undercuts the XLE V6 by over 3,400-bucks; making the TRD the cheapest and by far, the most entertaining V6 Camry you can buy.  Not so with the Avalon, as it is priced between Limited and Touring trims, at $43,330.

It’s hard to say how many people have been bombarding Toyota with pleas for sportier Camrys and Avalons. But, sales of the sporty-looking SE and XSE trims continue to rise; and making things even more exciting by backing up those looks with better performance, is a no-brainer kind of thing that Toyota always seems to get around to eventually. The 2020 Toyota Camry TRD and Avalon TRD may not be showing up at track days anytime soon, but if you can make your daily grind a little more thrilling without having to pay more to do it, why wouldn’t you?