The arrival of an all-new Toyota Corolla may not pin the excitement meter around here, but we’re all well aware of its importance, both to Toyota and the small car market as a whole. After all, it is the best-selling car of all time; and continues to write new chapters in the book of automotive history. This latest chapter maybe its most interesting yet.

The 2020 Toyota Corolla begins the 12th generation of a car that’s numero uno in global popularity. It continues with the reliability and comfort that the Corolla is historically known for, but adds an expressive new design, improved technology, and a powertrain option not previously available in the U.S.

Now riding on Toyota’s no longer new, New Global Architecture, means it shares many hardware bits with both the Prius and Camry.

Yet, despite the new platform, wheelbase is exactly the same as before. But shorter overhangs and a wider track give the little Corolla a lot more presence.

The engine is mounted lower in the new chassis, which means a lower hood covering it, improving driver visibility. 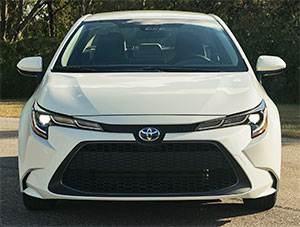 Under that hood, there’s either an updated 139-horsepower 1.8-liter I4 with 126 lb-ft. of torque, onto which is attached the expected CVT……or optionally, a new 169-horsepower 2.0-liter I4; and here, you can replace the CVT with a 6-speed manual if you wish.

Otherwise, you can go hybrid. Yes, the Corolla is now available as a hybrid here. Using the Prius’ Hybrid Synergy Drive, its good for 121-combined horsepower.

Both the chassis transformation and increased quietness, have made things much more pleasant driving the Corolla. Even at higher interstate speeds, our hybrid had ample power readily available, yet remained highly efficient as well; and somehow seems to put you in a good mood whenever you’re behind the wheel.

Now, the Corolla Hybrid is not exactly a real go-getter off the line, but it’s not overly pokey either. We hit 60 in 10.3-seconds, but it took a lengthy 17.7 to finish the ¼ at 79 miles-per-hour. Still, despite a CVT, the engine never sounded buzzy or tinny, and the Corolla chassis is very settled and solid at high speeds.

Likewise, sharing a suspension design with a Prius won’t get anyone too excited; and through our slalom course we found abundant understeer, along with slow over-boosted steering. 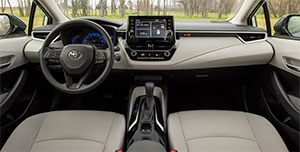 As for the interior, okay there are still some hard surfaces to be found around the cabin, but also space galore, as this is now considered a midsize car by the EPA.

Seats are quite comfortable, with the Corolla no longer feeling “entry-level”. There’s less of a penned in cockpit style of before, and all but base L grade get an 8-inch high res. touchscreen for multimedia.

Gauges are a modern take on the traditional Corolla setup; with an available 7.0-inch multi-information display that allows switching between digital or analog speedometers.

A lower roofline, makes getting in the back seats a little more difficult than before, but once inside, space is generous as well.

In addition to the hybrid, we got some seat time in a 1.8-liter-powered XLE. This engine has been in the Toyota lineup for some time now, but updates have kept it relevant; and despite the low output numbers, it never feels underpowered.

Knowing that many Corollas are piloted by new or less experienced drivers, Toyota has made Safety Sense 2.0 standard across the board. And it’s quite comprehensive, with automatic emergency braking, Full-speed Dynamic Cruise Control, and even Lane Tracing Assist all included.

Base pricing, at $20,555, is clearly a lot more than when the 3rd gen Corolla first went on sale here in the states back in 1975, but still a great value especially compared to the entry-level utilities that attract most shoppers these days. The Hybrid, in a single LE trim for now, starts at just $24,055.

Toyota certainly has a way with hybrids, and it’s safe to say the Corolla’s role in our automotive future is a secure one. The efficiency of a Prius in a more familiar package that, dare we say, is a lot easier on the eyes, is a match made in car heaven. That should help make the 2020 Toyota Corolla more appealing, and yes, more exciting than ever.