Despite being in the 6th and final year of its 3rd generation, the Toyota Highlander was the best-selling 3-row crossover in the U.S. last year. So obviously, priority #1 for the 4th generation Highlander is: don’t mess it up! Let’s see what other priorities Toyota has for the all-new Highlander.

The all-new 2020 Toyota Highlander has arrived, facing stiffer competition than ever before. But, what is it about the Toyota Highlander that has kept it atop the sales charts for so many years? It certainly wasn’t the first 3-row crossover, sporting just 2-rows when it debuted in 2001; but adding an optional 3rd row for 2004 when designers correctly perceived that that was where the segment was heading. It was however, the first hybrid 3-row vehicle of any kind, when the Highlander Hybrid was launched a year later. And the new Highlander follows a familiar powertrain trail, with some slight deviation. 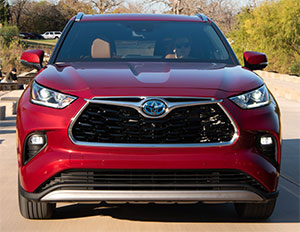 A hybrid returns as well, but it switches from a V6 to a smaller I4 engine. The now 2.5-liter combines with battery power for a 243-horsepower rating. That’s down considerably from the 306 of before, but as you can imagine, fuel economy is up just as significantly.

The V6 gets an 8-speed automatic transmission, while the hybrid works through a CVT; and as before the all-wheel-drive systems are unique. Toyota’s Dynamic Torque Vectoring system for the V6; rear-mounted Electronic On-Demand all-wheel-drive for the Hybrid.

Noteworthy, is that the new hybrid design, no longer requires all-wheel-drive; which also improves fuel economy. Toyota claims 35-Combined, which is a 24% increase from before. V6 Government Fuel Economy Ratings, for all but base trim, are 20-City, 28-Highway, and 23-Combined for front-wheel drive; all-wheel-drive mostly the same except for 1 less MPG on the highway.

Now, we spent some early drive time with both powertrains in the great state of Texas; and found that each has a unique character. The new hybrid may be down on power, but the engine is very responsive. Chances are, you won’t miss the V6. The CVT does produce some droning engine noises, at times, but we’d put up with it, considering 600-miles between fill ups are possible. 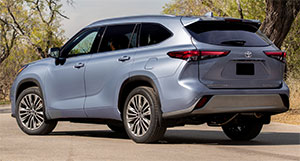 The V6 feels as strong as ever, and its 8-speed does a good job of managing power without being overly shift-happy. Ride quality for both remains on the softer side; and at times the Highlander can feel like a bigger vehicle than it is.

A sportier, more tautly sprung Highlander XSE may correct that when it arrives this fall. Indeed, Toyota has gone to great strides recently to make their mainstream vehicles look and drive more exciting. Highlander is no different, as the word “bold” can be found throughout the press release.

So, the new exterior design does stand out a little more than before; and like every generation before it, it has gotten incrementally larger as well. The biggest increase comes to both overall length and wheelbase, which both grow by 2.4-inches; all to the benefit of rear seat passengers, and really, here it’s all about the comfort and family features. That comfort abounds in all seating positions; 2nd row seats can be bench or Captains, depending on trim level. 3rd row access is good, but there’s still not quite adult size room back there. Behind it, is a good 16.0 cubic-ft. of cargo space; 48.4 behind the 2nd row, and a max of 84.3 with all seatbacks folded. 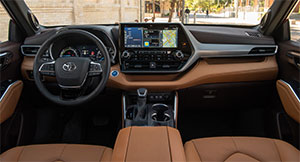 Towing capacity is 5,000-lbs. for the V6; 3,500-lbs. for the hybrid. New for this year are softer materials and better soundproofing, as well as the biggest infotainment screen yet for a Toyota, 12.3-inches; available to replace the standard 8.0-inch touchscreen. Both the screen and control pod are mounted very high into the dash; it’s a great new design, both aesthetically as well as, for usability.

And finally, safety features are as plentiful as you might expect.

So, while everything has changed, nothing has changed. The 2020 Toyota Highlander continues to deliver everything families are looking for in a package that looks better than ever. So without a doubt, when it comes to the Highlander, the Toyota faithful are gonna keep on lovin’ you.