In the ever growing landscape of 3-row utility vehicles, the Toyota Sequoia often gets lost in the shuffle. But, Toyota is making it harder for that to happen, giving it a TRD treatment sure to make it stand out in any carpool lane, and maybe even at the off-road park too.

Whether you’re talking Camrys or even Avalons, Toyota has been spreading their Toyota Racing Development magic more and more throughout their lineup. And the latest rabbit they’re pulling out of their high performance hat is this 2020 Toyota Sequoia TRD Pro. 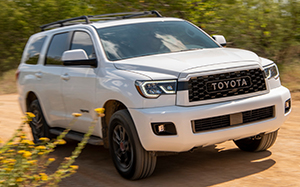 And the full-size Sequoia is the perfect vehicle to get the TRD Pro off-road treatment, as it remains a true body-on-frame utility, joining the Tacoma and 4Runner, and of course the Tundra on which the Sequoia is based.

Big Toyota lettering on the grille is the first difference you notice; accented by LED headlights and LED fog lights by Rigid Industries.

Underneath, there are skid plates, much appreciated grippy aluminum running boards, and upgraded springs and Fox internal bypass shocks for the suspension.

Forged aluminum TRD 18X8-inch wheels get 275/65 mud and snow tires; while up top is a beefy TRD roof rack, and a big moon roof. You don’t have to get this exclusive Army Green paint, but it’d certainly be our choice.

Inside, the standard leather seats get some red stitching, and there are all-weather floor mats for keeping all that dirt from your many adventures out of the carpet. There’s tons of space for seven occupants, as Captain’s chairs are standard for the 2nd row, with a 3-place 3rd row bench. 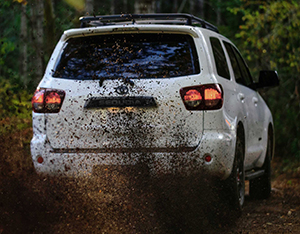 Cargo capacity behind the 3rd row is a good 18.9 cubic-ft., expanding to 66.6 with those seatbacks folded, and a maximum of 120.1. And we very much appreciated the power-folding 3rd row in a rig that sits this high of the ground.  The TRD Pro is also rated to tow 7,100-lbs.

Finally, for cranking tunes at the campsite, there’s a 14-speaker JBL audio system; it’s definitely loud, but perhaps not as clear as some other high end systems.

And we actually preferred the noise coming through the black-chrome tipped TRD cat-back exhaust system; attached to the Sequoia’s standard 5.7-liter V8; no upgrades here, but the 381-horsepower and beefy 401 lb-ft. of torque, are more than adequate, though a heavy step on the pedal is required if you want immediate action.

When doing so at our test track, there was a little bit of wheel-spin to battle at the line, as well as some wheel-hop as the rear tires began to hook up, but it quickly built momentum; feeling strong as it ushered us to 60 in 7.0-seconds flat.

That’s a half a second slower than our 2008 Sequoia SR5 test, perhaps it’s the weight penalty of all the extra equipment.

Automatic shifts are smooth, a little slow, and surprisingly infrequent; as Toyota lets this engine rev.  But, it sounds great while doing so; ushering us to the end of the ¼-mile in 15.3-seconds at 97 miles-per-hour. 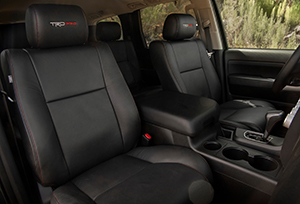 It was slow going throughout the slalom course, but not in a boring way. Steering is really boosted and sluggish, and there’s plenty of body roll; but quick jabs of the throttle will rotate the vehicle pretty quickly. Though the more confident we got doing that, the less confident the vehicle got with us, and started stepping in aggressively with stability control.

Prior to driving here at the track, the brakes didn’t feel that strong, but much like the throttle pedal, when you really step on ‘em, they respond!  There’s lots of bite, stopping us from 60 in just 113-feet; not as much nose dive as we expected, and it felt very controllable.

As for normal driving away from the track, the Sequoia has a supremely smooth ride, and great visibility, with a commanding view of the road.  It feels soft, but not sloppy; and while most things look dated inside, it’s sort of fitting for this rugged SUV.

This generation of Sequoia has actually been around since 2008. That’s a long time by any measure. But TRD has proven that even after all of that time; it’s more than relevant, if a little bit of a throwback. Rugged, yet refined; the 2020 Toyota Sequoia TRD Pro is a lot of SUV that’s easy to love.