This one certainly has been a long time coming, the all-new Toyota Supra. And we already feel sorry for it, Even though most folks have never even drove its predecessor, the new car has to live up to thousands of blog posts and twitter feeds longing for its return.. surely this new Supra will have a tough time being measured against all that hype…or will it?

Remember the Scion FR-S, aka, the Toyota 86? It was co-developed with Subaru. Two companies looking to mutually benefit from creating an inexpensive, back to basics rear drive sport coupe. Well, the 2020 Toyota GR Supra is a much loftier proposition, so Toyota needed a partner to match.

Enter, BMW. Yes, as I’m sure you’ve heard by now, the all-new Supra shares an architecture with the BMW Z4 roadster.

And, most enthusiasts will be happy to know an inline-6, which just happens to be a BMW specialty, returns. Yes, it’s no 2JZ, but Toyota did their own software for both the 3.0-liter and its 8-speed automatic transmission. Turbo-aided output is 335-horsepower and 365 lb-ft. of torque.

But, don’t throw this off as a BMW clone. Actually, it was spearheaded by the same Toyota chief engineer that oversaw the FR-S/BR-Z; and in similar fashion, both Toyota and BMW started with a basic modular chassis, but went their separate ways from there, though the Supra is assembled on the same Austrian assembly line as the Z4.

Engineered by Toyota’s GAZOO racing team, the Supra is truly a car in need of a track. Fortunately, the national press intro was right in our backyard at West Virginia’s Summit Point Motorsports Park.

Click things over to Sport mode, and it really comes alive; throttle response is heightened, shifts from the automatic become quicker, steering becomes sharper, the active rear differential gets more aggressive, and the artificially enhanced engine and crackly exhaust notes permeates the cabin a bit more.

Rear drive of course, the electronically controlled active diff. can send the full amount to power to the outside wheel to give you the most drive off of corners; but it also works to help settle the rear under hard braking.

Brembo brakes were more than up to the task of cutting speed in a hurry, to get through the Shenandoah Circuit’s many low speed corners.

Plenty of power for coming out of turns; it almost feels like someone shoved a V8 into an 86.

Manually triggering shifts, worked quite well, though not so well that we didn’t wish for a true manual. You don’t have to try too hard to find some oversteer out of corners; and while there was a little more softness and roll than we’d like, it just adds to the great overall feedback.

With a claimed 0-60 of just 4.1-seconds it’s the fastest production Toyota ever; and not to worry, the exhaust sounds are nothing like a BMW, or any other Toyota really, more like something conjured up in a tuner shop. Our best run, 4.4 seconds, was only slightly off. 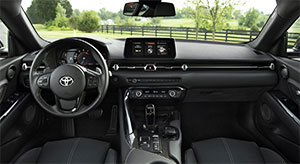 Launch control ensures you get the best out of it, and keeping the throttle pinned for the full ¼-mile resulted in a time of 12.8–seconds at 111 miles-per-hour.

Body panels are a mixed-metaphor of aluminum and steel. It looks much smaller in person; racy enough without going full fast and furious. Some air passageways are functional, most are not. 19-inch wheels come shod with Michelin Pilot Super Sports.

Away from the track, in normal mode, not unlike the 86, it’s a quite pleasant daily driver. Only big bumps cause any shutter. Seats are low, however, so you feel like you’re straining to see over the dash.

The BMW influence is strongest inside. Perhaps Toyota could have contributed a little more here, but that would have added a lot more onto the price. You do get a unique steering wheel and shifter; though operation of it is just like BMW. Seats are also distinctive and quite nice. And yes, that means there’s iDrive to contend with too.

Government Fuel Economy Ratings are 24-City, 31-Highway, and 26-Combined.  We averaged 29.3 miles-per-gallon on Premium. Making an average Energy Impact Score of 12.7-barrels of yearly oil use, with 5.5 tons of CO2 emissions.

For some, especially internet haters, nothing short of bringing back the last A80 would have satisfied them. But, if they’d give this 5th gen Supra a chance, they’d learn that like many of us Americans, despite the European roots, it has become something entirely different. So don’t think of the 2020 Toyota GR Supra as a continuation of what we had before, rather it’s an amazing melting pot of something uniquely awesome.