It’s hard to believe it, but this 4th generation Volkswagen Passat has been around since 2012. That’s when this European designed four door helped launch Volkswagen's new U.S. assembly plant in Chattanooga, Tennessee. So for 2020 it’s not all-new but it has received a much needed and quite comprehensive update. So let’s see the results.

In a world of shrinking midsize four-door sedan sales, keeping the 2020 Volkswagen Passat rolling on its current chassis, is a wise business decision.  Giving it a comprehensive makeover inside and out is an even better one.

That certainly applies to the exterior, as only the roof carries over.  The replacement sheet-metal features a very coupe-like shape, more akin to the handsome Arteon; while the increasingly rounded face is far less conservative than before.  Wheelbase remains a long 110.4-inches, providing elegant proportions and a wealth of space inside. 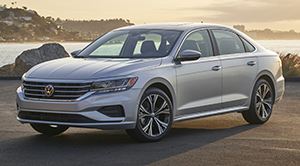 It’s still not flashy, but slimmer headlights, the more expressive face, and the 18–inch alloy wheels of our SEL test car; all contribute to making it a lot less generic-looking.

Inside, an updated horizontal dash design lends an increasingly upscale feel; as well as showcases a more modern-looking I.P.

The 6.3-inch Composition Media touchscreen for VW’s MIB II infotainment is smaller than many of its competitors, but its tablet-style operation is very logical, it’s easy to read, responds quickly to inputs, and blends into the dash instead of dominating it.

Gauges are typical VW; clear and precise with a bright color info center between the large speedometer and tach.

Materials range from cloth, to V-Tex, to this SEL’s leather coverings.  SEL also adds Comfort Sport seats, which are 8-way adjustable for both up front, and heated for both front and rear.  As well as our favorite extra, the Fender 400-watt premium audio system.

And not to worry, the “coupe-like” redesign did not take away any of the immense amount of space we’ve come to love in the Passat. There’s still an impressive 39.1-inches of rear seat legroom; and a healthy 15.9 cubic-ft. of storage space in the trunk. No one does interior packaging better than Volkswagen.

The days of having multiple engines to choose from in the Passat are long gone, now limited to just the 174-horsepower 2.0-liter I4 turbo.  But, for the good news, it delivers 22 additional lb-ft. of torque, thanks to a slight re-tune; now cranking out 206 lb-ft.

It sticks with a 6-speed automatic transmission, and is of course front-wheel-drive only. 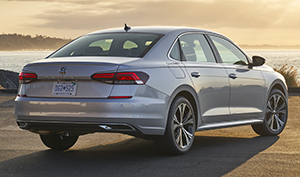 But the whole package was only good for a 0-60 time of 8.5-seconds at our test track. That’s about 2-seconds slower than the previously available V6, and slower than most of its competition as well.

Likewise the ¼-mile was a poky 16.5 seconds at 88 miles-per-hour. We would certainly appreciate a little more power, but VW clearly wants to reserve that for the Arteon as the flagship 4-door for the brand.

But, the Passat has never really been about drag racing.  Witness our first Passat test from 1990.  After being underwhelming in the ¼-mile, we noted steering was precise and just right; cutting through the gates of our slalom course with the tenacity of the smaller Jetta GLI. All with the stable, stuck to the road feel we love so much in German sedans costing thousands more.

30-years later, things are mostly the same.  Despite its larger size, and supposedly less sophisticated American chassis, the Passat still equates itself quite well through a handling course. 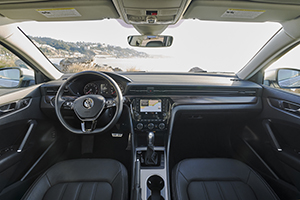 So maybe it’s not as responsive as a true sport sedan, but it’s very solid and stable with only slight understeer; and doesn’t get flustered when you push it.  The steering offers a fair amount of feel through the wheel, and action is precise.

Stability control is always on standby of course, and will step in quickly unless you keep inputs smooth.

Stepping on the brake pedal in earnest, resulted in an average stopping distance of just 104–feet from 60; good for the segment, but stops were a little inconsistent throughout our testing.

Safety systems get an update for ’20; Forward Collision Warning and Autonomous Emergency Braking are standard; with Lane Assist and Rear Traffic Alert optional.

Government Fuel Economy Ratings are 23-City, 34-Highway, and 27-Combined.  We averaged a fine 30.3 miles-per-gallon of Regular.

Our Passat also has a better than average Energy Impact Score of 12.2-barrels of yearly oil consumption, with 5.5-tons of CO2 emissions.

While the 2020 Volkswagen Passat alone won’t reverse the trend of slumping sedan sales; it does show Volkswagen is committed to the segment, and proves that sedans offer greater value than ever.  Space, comfort, European-style luxury and road manners, but still on a budget, the Passat continues to deliver.