When the Acura TLX arrived for 2015, it was a merging of both the luxury-minded TL and the sport-focused TSX sedans.  Tough task for sure; and while it showed potential, the union still resulted in a bit of an identity crisis.  Well, now it’s time for a new TLX, one whose aim is much more on target.

It’s clear that delivering more excitement was a major part of the plan for this 2021 Acura TLX.

Longer, lower, wider; all the usual transformative words when you’re going for a more aggressive design are here. But, more than that, proportions change drastically as well, with almost 4-inches of added wheelbase. 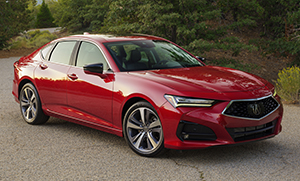 With that a much longer hood and a front axle pushed almost 8-inches farther forward from the dash.

Our A-Spec drives that point home even more with black trim, some glossy, some matte, 19-inch Shark Grey alloy wheels, LED fog lamps, a deck-lid spoiler, and tinted lens for both head and tail lights.

To back up those snarly looks, Acura prioritized lighter aluminum materials for the front-end including bodywork, subframe, and shock towers. That, plus moving the battery to the rear, has gone a long way to alleviate some of the nose heavy feel of its predecessor.

Add a vastly stiffer structure, upgraded suspension design, and the available 4th generation of Acura’s Super-Handling All-Wheel-Drive, and all trims get a significant performance boost when it comes to handling.

Our A-Spec’s upgraded SH-AWD can send 70% of engine torque to the rear wheels; faster than before; not to mention all of that can go to just one rear wheel, to provide serious torque vectoring performance.

Like the previous TLX, it has a unique demeanor that takes some getting used to. At first, all of the electronics seem like they are holding you back. But as you push harder and harder, the car responds better and better; to the point where it's inclined to oversteer. 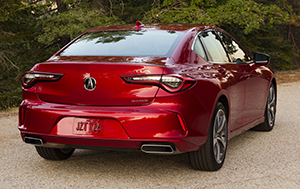 Suspension tuning is still on the softer side of rivals; and while steering response has noticeably quickened, it still feels artificially heavy.

Still, there’s lots of prowess and enjoyment to find here, even if it is a little hamstrung by its electronics.

Back at the track, our all-wheel-drive TLX A-Spec hooked right up and got to work; 0-60 in 5.8-seconds. Indeed, it is the fastest Acura sedan we’ve yet tested. Great low-end torque last almost up to the 6,800 RPM redline. The included 10-speed automatic delivers shifts that are both really smooth and plenty quick.  It feels and sounds like a stout package; with the ¼-mile at 14.4-seconds and 97 miles-per-hour.

Brakes were good and consistent. An always stable 125-ft stopping average from 60 was our result.

The Acura brand was born in 1986, part of an emerging trend of Japanese brands going upmarket to increase profitability. Acura launched with both the youthful Integra, and tech-savvy Legend luxury-sport sedan, which did indeed become legendary.  Their arrival coincided with our 5th season; we loved the strong Honda heritage, but wondered if that would be enough to lure buyers away from established upmarket brands. 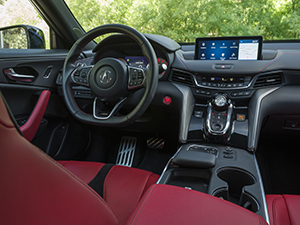 Well, they’ve certainly made major strides in that endeavor; aided by their unique interiors that nail the tech-heavy sporty luxury atmosphere better than most. Here, even sportier than before, but also roomier, except in the back where legroom is still tight.

Government Fuel Economy Ratings for our all-wheel-drive A-Spec are 21-City, 29-Highway, and 24-Combined. Our average was a fine 24.9 miles-per-gallon of Premium.

That rates an average Energy Impact Score, with use of 13.7-barrels of oil yearly, and 6.1-tons of CO2 emissions.

With major upgrades to styling, performance, technology, and standard equipment; a significant price increase is to be expected. Yet, at $38,525, it still undercuts rivals. Our A-Spec tester, one step below top Advance trim, goes for $45,275. All-wheel-drive is now available with all trims for $2,000 more.

The 2021 Acura TLX is clearly aimed more sharply than ever at middle-weight European sport sedans. And while there is easily enough performance to run in that class, the TLX has a much different vibe. It's precision-crafted, tech-savvy nature that makes the TLX just seem smarter than the rest, with fine sport sedan abilities as an added bonus.