One car design that’s always been a favorite around the MotorWeek office is Audi’s compact A4 sedan lineup. They’re sweet to drive and easy to live with. So, a mid cycle refresh of the A4 gives us a great excuse to revisit a favorite. And, what better way to experience the newness of the 4 than in the high-performance S version.  So, buckle up for sport sedan streaming, Audi-style!

The Audi S4 is part of the German big-3 if you will; as along with BMW and Mercedes counterparts, they largely define what it means to be a modern sport sedan. Not a member of the ultra-high performance RS family, the S4 occupies the sporty middle ground similar to the BMW M340i and Mercedes-AMG C43. 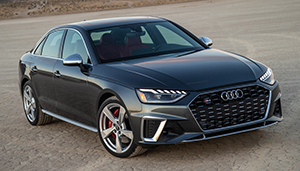 Now, unless you’re really an Audi fan, you probably won’t even notice its most recent updates, but for a mid-cycle redo they’re actually quite comprehensive; especially outside, with virtually every body panel having been addressed since this generation of A4 debuted in 2017.

Starting up front, Audi’s Singleframe grille has gotten wider and flatter, with larger air intakes down low in the front fascia.

Down the sides, wheel arches are more exaggerated, and C-pillars have been thinned out.

On top of all of that, the S4 gets aluminum trim, a trunk lid spoiler, and sweet-looking quad exhaust tips.

While you could be disappointed to not see any additional horsepower under the hood, we prefer to look at it as bonus that there’s not less, as Audi has played that tune before with the S4. So, the 3.0-liter V6 turbo still puts out the same 349-horsepower and 369 lb-ft. of torque as before. We’d file it under the “just right” heading, as at no time does it overwhelm or feel underpowered.

Standard quattro all-wheel-drive, an 8-speed Tiptronic transmission, and a heavily revised suspension are also part of what sets the S4 apart from the standard A4 fare.

Our first S4 test came in 1992, a time when Audi was attempting to establish itself as a performance brand here in the U.S.

We loved its understated styling, quick acceleration, firm handling, powerful brakes, and luxurious interior.  And we weren’t the only ones, noting that the entire U.S. allotment of ’92 S4s had already been spoken for.

All of those attributes continue to apply to this S4, especially inside, where the interior remains the definition of understated elegance. 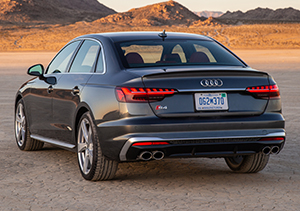 2020 saw the arrival of an updated infotainment system that was not just bigger, but better; operating 10-times faster than the previous system.

The S4 gets diamond-stitched full-power sport seats, with adjustable side bolsters and even a massaging function.

Rear seat room is typically tight for the segment, but trunk space, at 13.0 cubic-ft. is quite good; with 40/20/40 split-folding seatbacks to allow flexibility for longer items.

Getting to the good stuff; at the test track, the S4 is basically everything you want in a sport sedan.  It launches powerfully, with flawless grip for sprints to 60 in 4.3-seconds.  The turbo V6 sounds great and the Tiptronic shifts gears quickly right when you want it to.

Throughout the 12.8-second ¼ mile, which we finished at 108 miles-per-hour, it has that stable high-speed behavior that only German sedans do; floating over our test track’s rough surface, yet feeling like it’s ready to pounce in any direction should you nudge the wheel.

Traditionally, enhanced quattro grip comes with some understeer to deal with; but that’s been less evident in recent years, and darn near eliminated here.

The S4 is like a TIE starfighter that somehow zooms through redwoods at insane speeds without hitting anything.  Of course we feel like we’re not doing our jobs if we don’t point out some issue, and that’s the steering feel; like many of its counterparts, it seems to have been forgotten somewhere along the way.

On the other hand, you feel the brakes bite hard if you even breathe on the pedal; for solid, consistent stops of just 108-feet from 60. 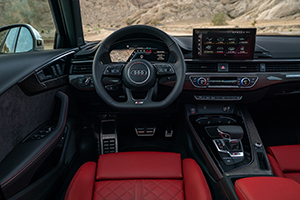 But the one thing that makes the S4 truly special, is away from the track, its comfort and luxury are hard to match at the price.

And Audi’s Drive Select still has great separation between drive modes. Comfort Mode is indeed that, an amazing transformation from sport sedan to luxury car feel devoid of ride harshness.

Government Fuel Economy Ratings are 20-City, 28-Highway, and 23-Combined. We averaged an underwhelming 20.8 miles-per-gallon on Premium.

In all an average Energy Impact Score of 14.3-barrels of yearly oil use, with 6.3-tons of CO2 emissions.

There are 3 trims for the S4, starting with Premium at $50,945; up to Prestige at $59,245. Fortunately, bargain shoppers, willing to sacrifice some performance for almost the same experience, can pick up an A4 for as little as $40,145.

While all of the German sport sedans attempt to deliver essentially the same thing, Audi seems the most unique in how they go about doing it. So, its ultimate appeal largely depends upon on where your allegiances lie.  But clearly to us, the latest Audi S4 is the best S4 yet; a sweet ride that is even sweeter, delivering what we love and expect from a sport sedan better than ever.