It’s correct to say that 2021 sees the launch of the 2nd generation BMW 4 Series. We all know the history of this compact coupe is much longer and more important to the brand than that. So, they could choose to go the cautious route, or they could go bold. Well, all it takes is one look at the new 4 to see which path they chose.

One thing’s for sure, you won’t miss this 2021 BMW M440i xDrive when it’s coming at you. Yes, we’ll address that elephant right from the get go. BMW has made a dramatic change to their trademark twin kidney grille, and let’s just say it’s a “big” deal. 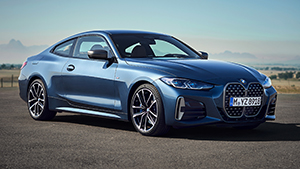 We’ve been seeing BMW’s new face for quite a while in photos; but now that it’s actually on the street, we’ll say it is much more likable in person. But, feel free to make up your own mind and light up social media with your opinion.

Before there was a 4 Series, it was known as a 3 Series Coupe of course, and we got acquainted early on in our history, testing this 1982 318i. Its E30 chassis gave birth to the first M3; but in our test of the 318, we found that despite “looking a bit too ordinary” and being “underpowered and overpriced”, it delivered where it mattered most, with “competent braking combined with great handling” making for a car that was “easy to master”.

So, putting aside the looks, let’s see if this 4 Series still has it where it counts.

While it’s not always a given these days, new generations do tend to bring more power and better performance, and that’s certainly the case here.

The M440 is not a full-on M car, but it’s not priced like one either; yet its performance is more than most people will ever need.

So, what better car to break in our new test track, Mason Dixon Dragway in Boonsboro, Maryland.

With standard xDrive all-wheel-drive, the M440 hits hard off the line with little to no wheel-spin and no noticeable turbo lag; just great grip, and a rip to 60 in only 4.1-seconds. 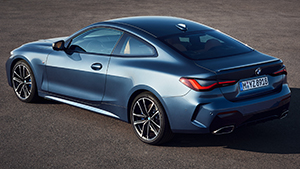 No manual transmission available, but the 8-speed automatic does a fantastic job of selecting the gears for you; providing a steady flow of power the whole way down the track for a ¼ mile time of 12.4-seconds at 114 miles-per-hour.

There’s a hint of assistance from the 440’s new 48-volt mild hybrid system; but it’s mostly in place to keep everything powered during extended use of the auto start/stop system.

Things got even better when we took it to our handling course. The 4 is of course based on the 3 sedan chassis which was revised for 2019. It makes for a coupe that is more rigid than before; also longer and wider, with additional aluminum parts.

Center of gravity here, is lower than the 3, plus it gets some additional chassis bracing to deliver better response and more agility than ever before.

It felt fantastic through the cones; tight, stable, and glued to the ground. Steering is sharp in feel, and response is immediate. There’s the ability to find both oversteer and understeer depending on your level of aggression with turn-ins and throttle application. Leaving it up to the driver, that’s how a performance coupe should feel.

Even when pushed to its limits, it never felt unstable, or that it was going to get away from you; it just performed beautifully. 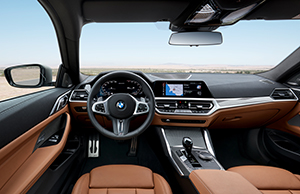 Phenomenal brakes as well; M sport binders stopped us from 60 in just 95-feet.  No fade no drama, other than the windows automatically rolling themselves up when you go all-in on the brake pedal.

The 4 Series mostly shares the 3’s interior; so not so much new there; just obvious evidence of BMW’s commitment to increasing luxury as much as ratcheting up performance.

Government fuel economy ratings are 22-City, 31-Highway, and 25-Combined; with our average, a good 26.8 miles-per-gallon of premium.

Ratings make for an average energy impact score; 13.2-barrels of yearly oil use and 5.7-tons of c02 emissions.

And there is indeed plenty of performance to be had here in the 2021 BMW M440i xDrive, to go along with what is an increasing amount of luxury and comfort. Not to mention, it’s big and bold, with a new face that’s in your face. And we wouldn’t have it any other way.