The current 3rd generation BMW X3 has been on the road since 2018. So, it’s not time for an all-new one just yet, or even for a mid-cycle refresh really. But there is news about an added powertrain option, and as you might have guessed, there’s a plug involved.

BMW already has a host of plug-ins throughout their lineup, but they haven’t had one in their best-selling model until now. So, enter the 2021 BMW X3 xDrive30e.

Starting with their well-proven 2.0-liter I4 turbo engine, BMW now tunes it for more efficiency, then integrates an 80–kW electric motor into the 8-speed automatic transmission.

Total output is 288-horsepower and 310 lb-ft. of torque, with 18-miles of EV range available with a fully-charged 12-kWh battery.

But, as with most PHEVs, it’s not really about ultimate EV use; it’s more about getting the better fuel economy of a hybrid, with the benefit of limited gas-free miles as an added bonus.  All delivered in a no compromise way; as its power output slots it in between base X3s and higher output M versions.

Government Fuel Economy Ratings are 24–Combined; 60-Combined for the MPGe.

Netting a much better than average Energy Impact Score, with 8.3-barrels of yearly oil use and 3.4-tons of CO2 emissions.

Charging only takes around 3-hours with a level-2 charger; about twice that on a standard household outlet. Batteries are packed mostly under the rear seat, but there is a slight loss of rear cargo capability, falling from 28.7 cubic-ft. to 27.2; with a max of 59.4. 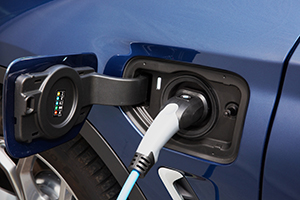 Drive modes allow you to select whether it operates as a hybrid or fully-electric; but left to its own devices it mostly defaults to full EV until you drain the battery, or ask for full power.  Monitoring is simple, with lots of visual cues as to how all systems are operating.

Thankfully, it remains a very enjoyable car to drive, with the added boost the electric motor provides in Hybrid mode very apparent; and you can get up to 84 miles-per-hour when in Electric mode alone.

At the track, the xDrive30e jumped off the line quickly, and to 60 in 6.4-seconds; a tenth quicker than we achieved with the base 2.0-liter X3 we tested earlier.

The automatic shifts quickly, with a feel that’s more sporty than luxury car smooth; staying solid and stable throughout the 14.9-second ¼-mile, finishing at 91 miles-per-hour.

There’s no longer a signature BMW feel; as depending on how today’s bimmer is outfitted, it can either be quite luxurious and on the soft side of things, or very stiff and responsive.  Here again, the xDrive30e occupies the middle ground.  Good steering response through the cones.

But understeer increases right along with speed; triggering a little too much help from stability control. 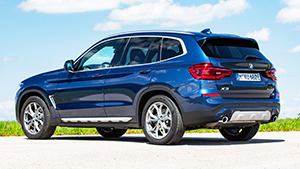 And their performance was quite good; with panic stops from 60 averaging just 100-feet.  It stayed straight and true, run after run; with no fade, and a very traditional feel, unlike many other PHEVs.

Other than the xDrive30e badging and an additional access door for the charge port, there’s not much else outside the vehicle to detract from the X3’s fantastic design.  And most of the regular X3’s options are available, so you’re not stuck with a specific PHEV model.

This Cognac Vernasca Leather with contrast stitching, is just 1 of the 6 different leathers available; and looks quite pretty with the added matte finish wood trim.

As far as European competitors go, BMW seems to be taking the lead in offering a host of PHEVs in their lineup; though Audi appears to be slightly ahead when it comes to full EV offerings here in the States, as a fully electric iX3 does exist, but BMW hasn’t made it available here as of yet. 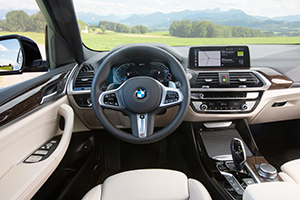 Preferring to enter our EV utility scene with a much bigger splash with the forthcoming iX.

We’ve certainly come a long way from the original X3 that arrived for 2004, and quickly became BMW’s number-one selling model.  BMW seemingly took what they’d learned from the midsize X5 utility and merged it with a 3-series, even offering a 6-speed manual transmission.  We called it a real “street performer”; one utility that declares its sport sedan lineage loud and clear.  Of course BMW now does more innovating with batteries than manual transmissions.

Now, that may seem like a lot of money to put down for a small SUV, but it’s about par for where the small luxury SUV segment is at these days.  And of course, it’s not for everyone.  But considering you’re getting both a little more performance, and potentially a lot more efficiency; the 2021 BMW xDrive30e is one of the better PHEV deals in the current luxury climate.