No one would have predicted that when the Chevrolet Tahoe first arrived in the early 1990s, that only 25 years later, SUVs would rule the automotive world.  Now while many of its contemporaries have drastically changed to fit into the  crossover-friendly landscape, the Tahoe has soldiered on full-framed and unashamed. And let’s see if that remains true for 2021.

Back when the first Tahoe appeared, American SUVs were mostly bare bones utilities hastily assembled on truck frames with creature comforts way down the list of priorities.  Much has changed since, and the all-new 2021 Chevrolet Tahoe has as well.  But... thankfully not too much. We tested a Tahoe in 1995 when it replaced the K5 Blazer in their lineup; and just as now, it was a shortened version of Chevrolet’s Suburban.  We praised its great ride, and noted it was then the only player in its market.

Well, that’s no longer the case, though truck-based SUVs are becoming rarer; but it does still have a great ride…even smoother and more compliant over rough pavement than before. 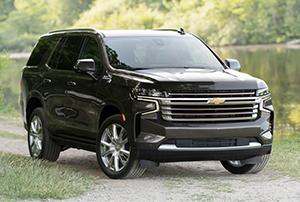 That’s largely due to a new independent rear suspension with Magnetic Ride Control.  Or go further with the Air Ride Adaptive suspension with 4-inches of ride height adjustment.

It spearheads what is the most comprehensive rethink of the Tahoe since inception.

Overall length is up 6.7-inches; now edging out its main rival Ford Expedition by less than an inch. And, there’s no denying Tahoe looks more imposing and sleeker than ever. Top High Country Trim adds a unique grille, and 22-inch chrome accented wheels.

While still based on a Silverado truck frame, Tahoe benefits from nearly 5-inches added wheelbase over last year. That, along with the new I.R.S, enabled Chevy to really boost interior space.

You have to look to minivans if you want more cargo room, 25.5 cubic-ft. behind the 3rd row is 66% more than before; 72.6 behind the second row, and a max capacity of 122.9 cubic-ft.; besting both Expedition and Expedition Max; and of course there’s still the Suburban if you need more. 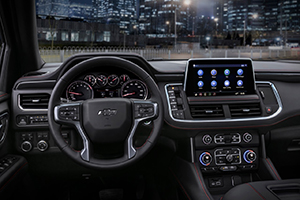 Chevrolet wanted to boost passenger space too, and there is indeed more for both rear rows; 3-more inches of legroom for the 2nd row, and a whopping 10-additional inches for 3rd row users.

Nothing pleases buyers more these days than lots of easy to use tech; here, a 10-inch infotainment touchscreen is standard, and an 8-inch digital instrument cluster is available, as is a Head-Up display.

Yes, we know most kids have their own screens to look at these days, but it’s hard to beat these available 12.6-inch HD touchscreens for coolness factor.

Some may find the multitude of big controls in the center stack a step backwards, but we appreciate their familiarity and ease of use.

Chevy went untraditional for the shifter; a push/pull gear selector by the center stack. Not a bad approach; and certainly, well located.

Engine choices are the Silverado’s 355-horsepower 5.3-liter and 420-horsepower 6.2-liter V8s, and even the delightful 277-horsepower 3.0-liter Duramax turbo-diesel; max towing is actually with the lighter 5.3-liter at 8,400-lbs; though diesel ratings are not yet final. Our High Country has the big 6.2-liter standard, and we loved its 460 lb-ft. of torque. 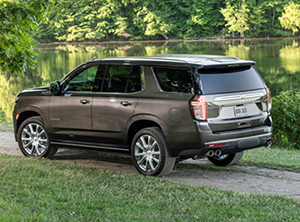 We put it to good use at our test track, where after a sluggish start, it was off to the races, and to 60 in just 7.1-seconds.  All Tahoes come with a 10-speed automatic, and this one was quite smooth; working through gears quickly on the way to a 15.4–second ¼-mile at 93 miles-per-hour.

It’s hard to ignore the fact that this Tahoe weighs in at more than 5,600-lbs., but like a custom made suit, the new independent rear suspension goes a long way to disguise it.  Still, it doesn’t really like to be pushed hard, as hyper-aggressive stability control quickly shut things down way before we approached any handling limits.

Away from the track, that suspension pays even bigger dividends, with the smoothest ride you’ll find in the full-size utility ranks.

Automatic Emergency Braking is standard. Our High Country sports HD Surround Vision with a host of cameras and up to 9-different views.

Government Fuel Economy Ratings for a 4-wheel-drive 6.2-liter are about where you’d expect them to be; 14-City, 19-Highway, and 16-Combined.  And, it needs Premium fuel; with which we averaged a great 20.3 miles-per-gallon.

So, progress apparently, does not come cheap but there’s no denying the 2021 Chevrolet Tahoe has indeed progressed.  Full-size, truck-based utilities are not for everyone, which explains the explosion in popularity of car-based crossover utilities.  But, if you need one, this Tahoe is the new one you’ll be happy to have!