In case you haven’t noticed, minivans aren’t really mini anymore. And while they’re not sport utility vehicles either, all of them can “out-utility” most of the current crop of crossovers when it comes to family hauling. So let’s check in with Chrysler, and see how they’re attempting to reach the pinnacle of minivan poshness and performance.

We’re not sure the minivan will ever again get the props it deserves, but those that aren’t afraid to live the “van life” know how useful they can be. The Chrysler Corporation gave birth to the modern front drive minivan, and for 2021 the Chrysler brand has a wealth of updates to keep their Pacifica relevant, and maybe even sway a few people away from the crossover they think they need. 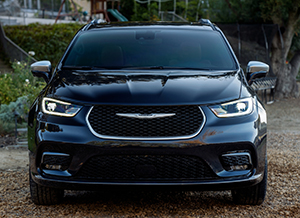 It was 1984’s Plymouth Voyager that introduced the minivan to Americans. In our test, we found no significant faults with Chrysler’s new T-Wagon, and called it one of the most important new concepts in American family motoring to come along in decades.  Other manufacturers of course quickly joined the trend, which eventually led to station wagons almost completely being eliminated here in the U.S.  Now, minivans are trying to avoid being dealt the same hand by crossovers.

Helping that cause, are some new Pacifica features like FamCam. This ceiling mounted camera allows you keep tabs on the goings on in the rear seats, via the 10-inch infotainment screen. And if you see any potential shenanigans, just tap on the seat for a close up.

To satisfy those who insist on the finer things in life, is new Pinnacle trim. It comes with quilted Nappa leather seats in all rows, with matching pillows for the 2nd row captain’s chairs, a highly functional Ultra console, exclusive Caramel and Piano Black theme, Timber Hydro trim, satin chrome accents, and suede headliner.

Second row captain’s chairs are too big to fold into the floor, so no Stow-n-Go feature, but they do slide around to get into the best position. But, you can still access the huge storage wells in the floor, which combines with that console to provide best in class minivan interior storage.

Third row seats fold into the floor as before; requiring just a push of a button here in the Pinnacle.

Perhaps the most important development in attracting buyers from the crossover crowd, is the Pacifica’s new all-wheel-drive system. With only the Toyota Sienna as a rival, it gives both an advantage over the rest.

The Pacifica’s fully-automatic mechanical system, completely disconnects the rear drive module when not needed. They claim it’s the most advanced system in the class, and are so confident you’ll want it, that they’ve made it standard on top Limited and Pinnacle trims. 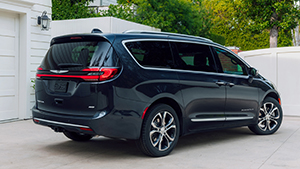 No changes to the power providing end; same excellent 3.6-liter V6, delivering 287-horsepower and 262 lb-ft. of torque through a 9-speed automatic transmission.

At Mason Dixon Dragway, equipped with grip, our Pinnacle AWD eased its way off the line with no drama, but not a lot of urgency either, taking a leisurely 8.0-seconds to hit 60. No real sense of immediacy down the rest of the track, but automatic shifts are smooth and timely; resulting in a 16.2-second ¼-mile at 86 miles-per-hour.

There was a fair amount of body roll through the cones, along with soft steering feel; but lots of adhesion for balance. We could carry a surprising amount of speed through here, provided we kept inputs smooth to avoid strong stability control mitigation.

All ’21 Pacificas get a freshened look outside. Everything up front is new, including bumper, grille, headlights, and fog lights. Plus 6 fresh wheel designs and revised taillights.

At 17-City, 25-Highway, and 20-Combined, the all-wheel-drive system certainly takes a toll on Government Fuel Economy Ratings; and our 21.8 miles-per-gallon average on Regular was indeed lower than the 23.7 mpgs we averaged with a Pacifica long-term a few years back. 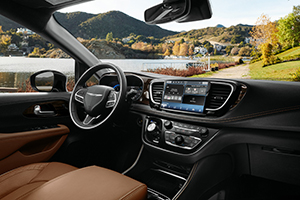 The Energy Impact Score is slightly below average; with 16.5-barrels of oil consumed yearly, with 7.4-tons of CO2 emissions.

A base Pacifica stickers for $37,315; so it’s quite a climb to reach the Pinnacle at $55,590. If all-wheel-drive is your priority, you don’t have to scale nearly as far, as you can add it to either Touring trims for $2,995. Hybrid Pacificas also remain available, but stay front-wheel-drive only.

The Chrysler Pacifica debuted in minivan form for 2017; and we’re guessing there are still quite a few more years left in its current lifecycle. But, the 2021 Pacifica Pinnacle AWD proves that minivans remain a priority at Stellantis, and there are still a whole lot of American families that will be happy about that.