In case you’ve been living under a rock, the big news is that the beefy-look Ford Bronco is back! But, with a 2-pronged sub-brand approach that sees this compact Bronco Sport arrive before the no-holds barred Bronco itself. So, let’s see if this beefy looking crossover is worthy of the Bronco name, or just a jazzed up escape with a superiority complex.

Ford calls the 2021 Bronco Sport the “Bronco” of small SUVs.  By that, they mean it’s the most rugged, adventure-ready crossover out there. As evidence, 4-wheel-drive is standard across the board on all Bronco Sports.

We think this is a great call on their part, as making it optional would mean we’d have to make a bigger deal about its front-drive based Escape platform. 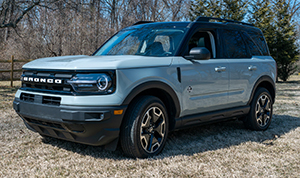 The suspension is an independent MacPherson strut-type up front, with an independent double lateral link semi-trailing arm setup in the rear; coil springs all around, with a decent 7.4 inches of wheel travel front, 8.1 in the rear.

Badlands is similar to Jeep’s Trailhawk in that it’s set up for off-roading to the best possible extent.

It comes with a max of 8.8 inches of ground clearance; an inch more than standard; a twin-clutch locking rear differential for even better power distribution for getting out of sticky situations, and additional Mud/Ruts and Rock Crawl modes added to the Goes Over Any type of Terrain Management system.

Our lower, beach-inspired Outer Banks tester, is more about style; with 18-inch wheels, a shadow black roof, ambient lighting, and an upgraded interior.

Ford obviously spared no expense at making the Bronco Sport a legit off-road capable crossover. From the inside you also sit high with a commanding view of the sculpted hood bulges and whatever’s ahead.

Besides sharing a steering wheel, and lower dash design, there’s little common in here with the Escape. And while materials are not disappointing, there are a few oddities, like the lack of available seat memory or a power rear liftgate option, something you get in all but the base Escape.

But it does improve on the Escape’s functionality, with a unique split lift-gate that allows for easier access when there’s a bike rack mounted in back; and you even get a bottle opener. 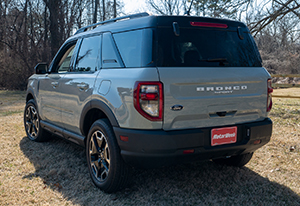 Unfortunately, the only way to get the 250-horsepower 2.0-liter EcoBoost 4-cylinder engine is with top Badlands trim. All other Sports come with Ford’s 1.5-liter 3-cylinder EcoBoost engine. At 181-horsepower and 190 lb-ft. of torque, power is certainly adequate.

But some folks will surely crave more, especially if most of their adventures require taking a lot of provisions along for the ride.

But, a trip to our local 75-80 Dragway showed that it’s just fine for everyday use. It launches pretty aggressively, but power starts to drop off almost at once from there; taking a full 8.5-seconds to hit 60.

It doesn’t improve as you run through the gears, with the ¼-mile taking 16.4-seconds at 83 miles-per-hour.

Nothing special in the handling department either, which again speaks to another departure of the Bronco Sport from the Escape. We’ve always felt the Escape was an above average handler for the segment.

But, it’s doubtful many of your excursions will include trying to drive through a cone course as fast as possible; so it’s good to know the Bronco Sport does excel where it matters most. The ride quality both on and off road is actually quite fabulous, reminding us of Jeep’s original XJ, only with a solid feel and well weighted steering that the Cherokee never had. 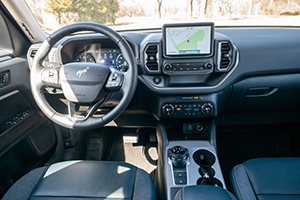 Bronco’s history is a long one of course, stretching back to 1966, and while it started as a small compact just like the Bronco Sport, it eventually grew to a full-size behemoth before production halted in 1996.  This Bronco Sport most closely resembles the 1984 Bronco II. There wasn’t much this rugged little Ranger-based wonder couldn’t do; other than stick around I guess, as it only had a 6 year run.

Bronco Sport government Fuel Economy Ratings with the 1.5-liter turbo are 25-City, 28-Highway, and 26-Combined. We got a good 27.1 miles-per-gallon on Regular.

For an average Energy Impact Score; 12.7-barrels of yearly oil use, with 5.7-tons of CO2 emissions.

Much like the Mustang Mach-E, it’s easy to question some of Ford’s decision making when it comes to naming and packaging. But after driving it, the 2021 Ford Bronco Sport makes a whole lot more sense. It has its flaws, but on the whole, it's everything Ford said it would be...and more. And, according to early orders, it’s going to be declared a big hit well before the purist’s Bronco even arrives.