The 2nd gen Honda Ridgeline has won its share of awards, including our own recent Drivers’ Choice Award for Best Midsize Pickup. Yet, due to its unibody construction, it still doesn’t get much respect among the truck crowd. Let’s see if an updated ’21 Ridgeline has what it takes to win them over.

Four years into its 2nd generation, the 2021 Honda Ridgeline gets a more rugged reboot. We’re talking about a newly available Honda Performance Development or HPD Package which adds black fender flares, a unique grille, and bronze-colored 18” HPD wheels with a more aggressive version of the Firestone Destination LE2 tires that have additional rut-grabbing sidewall tread. Now, off-road styling packages certainly have their appeal, but have little chance of winning over folks at the off-road park; so fortunately, that’s not all that’s new for ’21 Ridgelines. 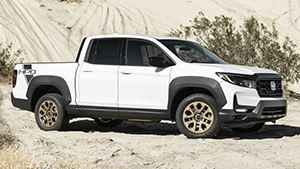 All-wheel-drive is now standard, so no more front-wheel-drive Ridgelines rolling around. And even without the HPD package, it continues to look even more truck-like, as everything forward of the A-pillars is new. The front end is taller, with a more upright face to seperate it further from the chassis sharing Pilot crossover and Odyssey minivan.

And in back, the rear bumper gets redesigned to highlight new exhaust tips. Inside, our favorite new addition is far more functional than stylish, it’s a physical volume knob added to the audio system; sounds silly, but it’s a big deal to a lot of people, as is new wireless phone charging.

Interiors also get spruced up with contrast stitching for all trims. One change we’re not a fan of, is no more physical shifter. That actually happened last year when the 6-speed automatic was replaced with Honda’s 9-speed with a button gear selector.

One thing that hasn’t changed, is the copious amounts of comfort and space in the Ridgeline; something unique in the midsize truck field.

Along with their dual action tailgate, underfloor storage bin, and in bed speakers for the audio system.

Same engine as before too; the 3.5-liter V6’s 280–horsepower and 262 lb-ft. of torque, more than adequate to haul you and your family’s cargo around, or 5,000-lbs. of trailer with the standard Class-3 tow hitch.

So, it’s off to Mason Dixon Dragway to see how quickly it gets the Ridgeline up to speed. Plenty of grip off the line; no wheel spin, with only a slight hesitation for full power to arrive and we were off to 60 in 7.1-seconds. 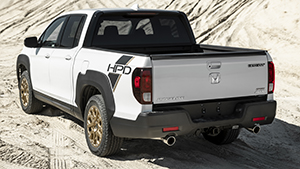 Typical for Honda’s 9-speed, shifts were quick and fairly smooth; keeping the power flowing throughout the 15.6-second ¼-mile which ended with the Ridgeline at 90 miles-per-hour.

Fairly consistent stops from 60 of 121-feet mean the Ridgeline stops as good as it goes. Still, there’s more forward pitch than we’d prefer, and a very soft pedal with lots of travel.

As expected, the Ridgeline felt very solid through our handling course. No stability system intervention, and there was a fair amount of road feel through the wheel. Body roll is extremely manageable compared to other pickups, and it didn’t get out of sorts when we picked up the pace.

This is primarily due to its unibody architecture; but also because of its, non-typical for the truck segment, MacPherson strut front and multi-link rear suspension. That combo pays even bigger dividends off the track, with a ride that’s closer to a midsize sedan than anything else with an open bed on it.

The original Ridgeline made quite an impression when it burst onto the scene in 2006. Import buyers immediately embraced its mix of capability and drivability; but for many it was just too odd looking. After taking a gap year, during which time many predicted the Ridgeline’s demise; it returned for 2017 with a new look that was more familiar to truck buyers, and even more capability; a road the ’21 continues to travel down. 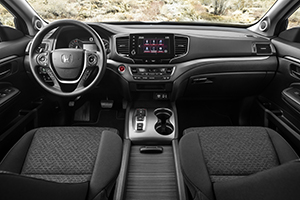 Government Fuel Economy Ratings are 18-City, 24-Highway, and 21-Combined; we averaged a fine 20.3 miles-per-gallon of Regular.

For an Energy Impact Score that’s only slightly below average for all vehicles at 15.7-barrels of yearly oil use and 7.3-tons of CO2 emissions.

The Ridgeline is of course only available as a 4-door crew cab, with prices starting at $37,715. The HPD Package can be added to any of the 4 available trims for $2,800; and as mentioned earlier, all-wheel-drive is now standard.

Rugged reboot or not, there are some people who will never accept the 2021 Honda Ridgeline as a true truck. And that’s just fine, for in truth it does most truck-like things just as good as any midsize pickup and delivers car-like comfort and maneuverability that no other truck can match. So, to us the Ridgeline is still a winner.