A Big Load of Refinement and Extravagance

It wasn’t that long ago, that if you wanted a big capable utility vehicle, you had to settle for a bare bones utility vibe. But that all changed in the 1990s with the explosion of luxury-branded SUVs. Now the Infiniti QX80 was late arriving on that scene, but it has evolved into one of the best examples of the concept. So let’s see what changes for 2021.

The Infiniti QX80 rides into 2021, an ancient 11-years into its 2nd–generation; getting multiple updates to try and stay relevant in a constantly changing and still growing luxury SUV scene. 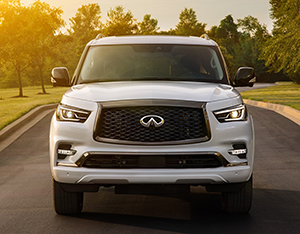 The Infiniti QX80 first arrived in 2004 as the QX56, and was all too obviously a gussied-up Nissan Pathfinder Armada. Still we loved its massive size, best in class torque, and competent handling. As it aged, it actually added sophistication, including ditching Nissan’s Titan truck platform in favor of the Nissan Patrol’s; a rugged vehicle that began life in the 1950s as a Jeep clone, and morphed into something more akin to Land Rover and Land Cruiser, yet never available here in the U.S. The QX really came into its own when that happened, delivering both serious capability and above average amounts of luxury.

Now onto 2021, and known as the QX80 since 2014, there’s a total revamp of grade strategy. Base Luxe remains, but above that is now Premium Select and Sensory.

And it is Sensory that truly showcases what this luxury SUV is all about. As, there is definitely something for every sense to enjoy.

There’s upgraded leather to sit in, Charcoal Burl wood trim to look at, a 17-speaker Bose Performance Audio system to listen to, and a new graphite tricot headliner overhead. Plus, a Hydraulic Body Motion Control System that attempts to both tame body roll and deliver a smoother ride.

For the most part, big SUVs still rely on big V8 power to get around, and Nissan makes a great one. 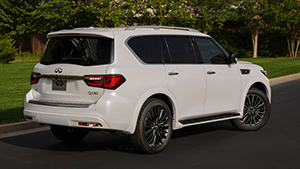 It works with a 7-speed automatic transmission, with rear-wheel-drive standard, and all-wheel-drive optional on all trims for $3,100.

We took our all-wheel-drive tester to Mason Dixon Dragway; and while there’s a ton of torque here in the QX80, in the interest of ultimate smoothness, it seems hesitant to unleash all of it on you at once. But, it sounds powerful as you get rolling and it slowly deals out the goods, hitting 60 in a still quick 6.3-seconds.

The same theme applies to the transmission.

Prioritizing silky smoothness over quickness. Still, a 14.8-second 1/4 at 96 miles-per-hour is plenty fast for a big luxury utility.

Despite the Hydraulic Body Motion Control System, we still felt quite a bit of body roll throughout our handling course. Smoothness remains the motif in this exercise as well; both in the overall feel of the vehicle, and how you need to keep your inputs to avoid harsh braking from the stability system. Overall, soft and slow; but also, capable and solid. 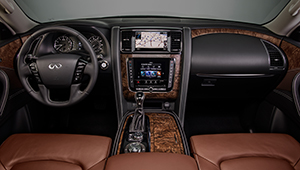 With all-wheel-drive, Government Fuel Economy Ratings are 13-City, 19-Highway, and 15-Combined; our average on Premium fuel came in at 15.5 miles-per-gallon.

That’s makes for a much worse than average Energy Impact Score, consuming 22.0-barrels of oil yearly, with 9.8-tons of CO2 emissions.

We’re not sure how much longer this 2021 Infiniti QX80 will soldier on in its current form, but there’s no sign of it slowing down any time soon.

It’s not exactly a sensory overload, but there is a big load of refinement and extravagance here, to go along with a heaping helping of capability. Modern luxury, with an old-school vibe that’s hard not to like.