Jaguar’s F-Pace arrived for 2017 as the brand’s first SUV.  It really impressed us, both with its fantastic style and well-above average driving dynamics; but it wasn’t perfect, and Jag has been refining it ever since. So, time to check back in with the latest F-Pace to see what’s changed for the better. 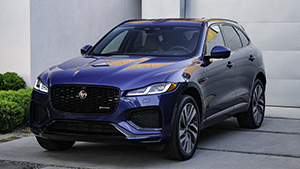 Considering that Jaguar was a real latecomer to the luxury SUV party, the stylish F-Pace arrived like it truly belonged; immediately becoming one of the segment’s most stand-out members, winning our 2017 Drivers’ Choice Award for Best Luxury Utility. Well, things only get better for 2021.

It still looks spectacular, but gets gussied up a bit with a more sculpted hood, slimmed-down LED headlights and larger diamond-detailed grille.  New taillights are patterned after the electric I-Pace’s and the bumper below has been revised to accommodate the F-Pace’s width.

Standard engine remains a 246-horsepower 2.0-liter turbo-4, dubbed the P250; but replacing the previous supercharged V6 is Jaguar’s latest inline-6 that is turbocharged as well as electrified with a 48-volt mild-hybrid system.

It’s available in both a P340 335-horsepower version, as well as a P400 395-horsepower version with 406 lb-ft. of torque as found here in the R Dynamic S. All F-Paces come equipped with an 8-speed automatic transmission and all-wheel-drive.

At the test track, the R Dynamic S left with a soft launch, but power soon came on like a wrecking ball, throwing us back in the seat and sounding great as we ripped to 60 in 5.4–seconds. 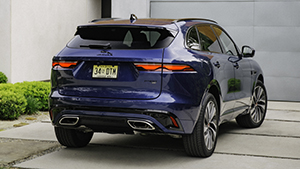 It feels faster than that and it actually used to be, as that’s about 2/10ths of a second slower than the old supercharged V6, despite 15-additional horsepower. We’ll chalk that up to the added weight of the hybrid hardware and to different tuning for the 8-speed automatic.

What it loses in quickness, however, it gains in refinement, as that V6 was admittedly a little rough around the edges. We certainly enjoyed the character, but perhaps it was a tad out of place for Jaguar. The engine is now every bit as silky smooth as the rest of the drivetrain, all working together to get us to the end of the ¼-mile in 14.0-seconds at 103 miles-per-hour.

It felt good initially through our cone course: quick turn-ins, lots of grip; but as we pushed harder, the body roll became a little more prevalent, though still less than segment norms. 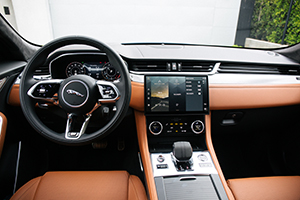 Much like the XF sedan that we tested recently, on which the F-Pace is based, the interior has been dramatically transformed with an all-new dash and center console, along with an upgrade for all materials.

So, with a huge boost in refinement to go along with the noteworthy style and performance it already had going for it, the much-improved 2021 Jaguar F-Pace now fully aligns itself with the rest of the recent crop of Jags that we’ve tested; giving luxury buyers a unique option to stand out from the crowd.