More Than Just a Makeover

Jaguar may be down to just one sedan in their now mostly SUV lineup, but that doesn’t mean they’re neglecting their 4-door faithful and their heritage. For 2021, the 2nd generation xf gets new styling, new technologies, and very likely more than a few new fans.

The luxury segment’s transition from sedans to utility vehicles is a done deal. But, in many gated community driveways, there’s certainly room for both.  Jaguar hopes a revamped midsize XF four-door will make them the choice for that spot and keep their legendary sedan business going a while longer. 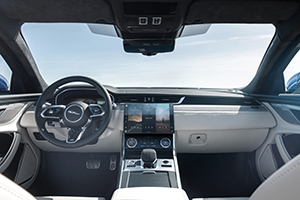 We’ll start with the interior, where the updates are most noticeable and much appreciated. More than just a makeover; just about everything, including dash, console, and door panels, are completely new.  Materials are also different, ratcheting up the indulgence quotient with Burl Ash wood, nicer leather, and laser-etched speaker covers for the Meridian surround sound system.

They’ve even gone as far as eliminating the pop-up rotary drive selector; replacing it with a more traditional-looking shifter with cricket-ball stitching.  It feels very spacious, and the front seats offer a great mix of softness and support. Both rear seat legroom, and the huge trunk, with up to 19.1 cubic-ft. of space, are above average for the segment.

Updated infotainment is Jag’s Pivi Pro system, which features an 11.4-inch curved glass touchscreen.  It’s still not the most user-friendly, but it does look impressive. Other tech highlights include the ClearSight camera display rear view mirror, Head-Up windshield display, and panoramic sunroof with a blind that you can open with just a wave of the hand. The XF was already plenty quiet, but hits a new level with improved Active Road Noise Cancellation.

As for the outside, both front and rear fascias have been tweaked; the grille gets a little bigger, the headlights a little slimmer, and the back end gets a tad more expressive, drawing evermore influence from Jag’s F-type. The R-Dynamic SE, swaps some of the chrome embellishments for sporty gloss black, and comes with 19-inch wheels.  These split-spoke 20s are just one of the many wheel upgrades available. 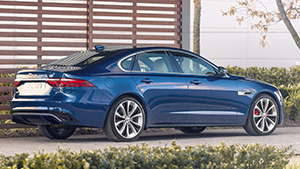 When this generation XF arrived for 2016, it brought a new aluminum architecture, which enabled a big improvement in ride-and-handling. Something we looked forward to exploring as we rolled into our Mason Dixon Dragway testing grounds. Despite a soft suspension, and a little more roll than we’d like, the all-wheel-drive R-Dynamic SE clings to the pavement with proficiency. We pushed harder and harder to find its limits, always waiting for some understeer or oversteer to show up; instead we just found more and more grip. It just felt so great hustling through the cones in a world-class sedan again.

All XF’s now come with a 2.0-liter I4 turbo engine; but there are 2 different tunes. Standard output for rear-wheel-drive is 246-horsepower; R-Dynamic gets bumped up to 296 along with 295 lb-ft. of torque; and comes equipped with all-wheel-drive. It was a little subdued at launch, this 4-banger certainly not having the character of Jag’s supercharged V6; but a 0-60 of 6.6-seconds is nicely satisfactory for a luxury sedan.

The 8-speed automatic transmission operates with typical Jaguar smoothness, and provides timely shifts on the way to a 15.2-second ¼-mile at 90 miles-per-hour. In our braking test, the XF felt very soft. But despite minor fade, our average stopping distance from 60 of just 114-feet was quite good.

Jaguar still has plenty of fans out there; many of whom remain traditionally minded, and are not willing to give up their sedan just yet. This 2021 Jaguar XF should do a lot more than just keep them happy for a while, it might even convince a few more people to return to sedan civility.