All-new carmakers face a steep uphill battle. And trying to establish a new luxury brand is even harder.  But, with the automotive landscape currently transitioning from fossil fuels to electric, there’s never been a better time to give it a shot. So let us introduce you to Karma Automotive, and their striking GS-6.

While this 2021 GS-6 may be the first time you’ve heard of Karma Automotive; it’s actually the latest offering from a brand that’s been around since 2015.

And if you’re thinking “wait a minute; that looks and sounds familiar”, you’re onto something, so a little history is in order. 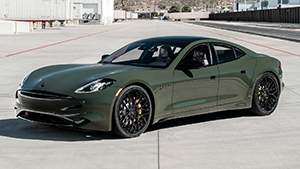 Karma Automotive formed from what was left of Fisker Automotive, who’s only product was...you guessed it, the Karma.  Fisker was of course founded by Henrik Fisker, former Design Director at Aston Martin; and when at BMW before that, worked on the Z8 and first X5.

So, what we see here in the GS-6, is a highly evolved version of the original Fisker Karma plug-in hybrid, having also been known as the Revero when Karma Automotive first launched.  The current Revero GT will be redesigned, moving upmarket.

After picking up this GS-6 for our exclusive first drive, we hit the highway and found the ride to indeed be luxury car smooth and well-composed.

But on curvy roads, after engaging Sport mode, the car really came alive; it’s very responsive, though the steering does feel artificially heavy at times.

Regardless of speed or road surface, the GS-6 remained very quiet; especially in Stealth mode, which of course means operating as a full-EV.

Yes, this advanced plug-in hybrid beauty is rated for 61-miles of pure EV driving; with a full tank of gas you’ll get over 300 total, which brings us to powertrain talk.

While the GS-6 is a plug-in hybrid vehicle, it’s more precisely a pure-EV with a range extending gas engine that acts as a generator. Think Chevrolet Volt, or more recently, the BMW i8.

And speaking of BMW, they are the source of the range extender engine.

It’s a 1.5-liter I3 turbo that combines with a pair of rear-mounted electric motors, to produce a total output of 536-horsepower and 550 lb-ft. of torque, all to the rear wheels. 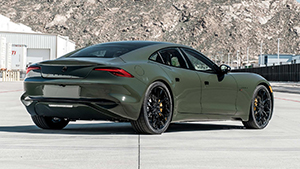 When the engine kicks in, it’s mostly seamless, except for some “enhanced” exhaust noise from the car’s speakers. Typical for vehicles with this type of system. Engine noise doesn’t always correlate to throttle inputs, so it takes some getting used to.

With a full battery, acceleration is near instantaneous, getting to 60 in 4.5-seconds; that alone is reason enough to keep the battery charged.

Charging only takes about 4-hours on Level-2. Now we’ve had mixed results with fast charging over the years, but got 50-miles added to the GS-6, which is almost a full charge, in only 20-minutes.

Having a motor dedicated to each rear wheel, acts as a torque-vectoring differential, varying power distribution to aid its already fine handling.

Getting in and out of the car is a little challenging due to the ultra-low seating position and tight door openings; but your efforts are rewarded with an interior that’s equal parts sporty and luxurious.

Paddles behind the wheel are not shifters as there’s no real transmission; the right one adjusts between 3-levels of regen braking, while the left one selects drive modes.

The actual shifter is a push-button pod in the console. It’s simple enough to use, and smartly befits the car.

The center screen looks great and is easily reached for its touch controls. We’re not in love with having to use a touchscreen for things like side mirror adjustments and HVAC, but at least it’s easy to navigate.

There’s a limited amount of legroom for 2 passengers in the rear, with a control console in between. 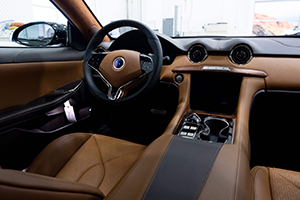 But, the tight confines are a small price to pay for the extraordinarily gorgeous sheet metal presented here. The GS-6 is a looker for sure, its smooth face and exaggerated hips are well incorporated into a very fluid shape, tightly draped over the chassis.

The overall build and fit and finish of the car is quite good.  It’s not over the top luxurious, but certainly feels like a high quality piece of machinery. Plus, Karmas are assembled in Moreno Valley, California.

Government Fuel Economy Ratings are 26-Combined; 70-Combined for the MPGe.

Rating a much better than average Energy Impact Score just 2.8-barrels of yearly oil use, with 1.2-tons of CO2 emissions.

Looks like what goes around truly does come around, with the very appropriately-named 2021 Karma GS-6.  Whether you look at it as a carryover from Fisker, or a placeholder until Karma goes fully electric; it’s a stunning automobile that turns heads wherever it rapidly goes.