Times are certainly tough in the mid-size family sedan segment; but rather than abandon ship, Kia is deploying a rather interesting strategy. They're turning away from the Optima, and all of the momentum it built in recent years, and launching an all-new K5 mid-size sedan. Let's find out if that's a good idea.

Kia’s Optima is no more, being replaced by this 2021 Kia K5. That’s how the Optima was known in most other parts of the world. So, the K5 is still a midsize 4-door, still sharing a platform with the Hyundai Sonata; but now rebranded, hoping to capitalize on the all of the excitement created by Kia’s Stinger performance-oriented fastback sport sedan. 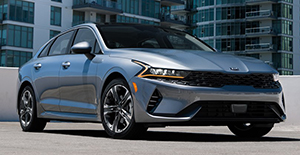 The K5 is longer, lower, and wider than the Optima, and will be the first front-wheel-drive based Kia sedan to be available with all-wheel-drive. A feature the Sonata does not offer. The Kia Stinger’s influence can be seen in the K5’s aggressive wide-grille face, and thick hatchback-like C-pillars. The zigzag daytime running lights are meant to resemble the EKG traces of a heart monitor; 16, 18, or 19-inch wheels are available. It’s certainly a sporty take, compared to the Sonata’s graceful elegance.

Inside, things are not a total departure from the previous Optima, but there is a little more openness to it, and an increasingly polished presence; along with sleeker finishes, and a more 3-dimensional linear dash. Depending on trim, you’ll get either an 8 or 10-inch touchscreen mounted high in front of the dash; while in between the seats, is a tall console with a traditional automatic shifter.

The seating position is fairly high for a family sedan; but there’s good comfort to be had, and you don’t feel like you have to climb out of it. 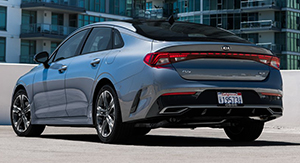 The K5 has almost 2-inches of additional wheelbase compared to the Optima; primarily to the benefit of rear seat passengers, there’s more than enough room back here for 6-foot adults. And the seatbacks fold easily after yanking the trunk-mounted pull- tabs, to expand on the 16.0 cubic-ft. of trunk space. At launch, all trims come with the Sonata’s 1.6-liter I4 turbo engine, producing 180–horsepower and 195 lb-ft. of torque. It’s attached to an 8- speed automatic transmission.

As mentioned earlier; all-wheel-drive can be added, for $2,100. And you get a sense of its purpose, as Kia actually calls it all-Weather-drive, and it adds a Snow setting to the drive modes.

Arriving later will be a 290–horsepower 2.5-liter turbo-4 in the K5 GT, which will come with an 8-speed dual-clutch transmission, and a whole bunch of other upgrades as well, in order to shuttle it to 60 in under 6-seconds. 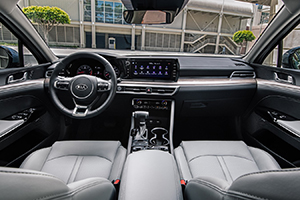 Our EX tester stuck with standard front-wheel-drive; and at the test track, there was a little bit of wheel-spin at the line, but it quickly gathered itself up and started laying some power down. We hit 60 in 7.9-seconds; a few tenths slower than we got in the Hyundai Sonata with this same engine. Power delivery stayed consistent down the track, but it never feels overly eager or in a particular hurry. The ¼-mile passed in a leisurely 16.1- seconds at 88 miles-per-hour. Needless to say, it’ll certainly get you where you need to go; but we’re sure looking forward to testing that GT.

And it will have a great platform to build upon, as even here in base form, the K5 responded quickly and accurately through our cone course. There was a decent amount of body roll, but surprisingly good balance; as depending on how aggressively you make your inputs, you can find either understeer or some oversteer. Like Sonata, great brakes; consistent fade-free stops from 60 of just 97-feet; tracking straight and true every time. Additional sound deadening materials, and a standard Acoustic Laminated windshield has made the K5 noticeably quieter inside.

Base pricing ranges from LX trim at $24,455, to just $4,500 more for the EX, at $28,955. GT, when it arrives, will start at $31,455. Our reservations on the name change aside, Kia builds a pretty decent midsize sedan. And while we do mourn the loss of the Optima name, ultimately, it doesn’t matter what plastic nameplate is on the deck-lid. The 2021 Kia K5 is well equipped to take the Kia brand into the future.