Sets Itself Apart Where It Matters most...On A Race Track

As you can imagine, driving any Lamborghini, anywhere, is exciting! But, driving one that was specifically built for getting around a road course as fast as possible? Well, that’s a whole new level of fun. So, enough talking, let’s hit Roebling roads raceway in this Lamborghini Huracan STO, and get this part started!

We’re all familiar with the Lamborghini Huracan. This entry-level Lambo emerged onto the supercar scene for 2015 and quickly became their best-selling car ever. The major reason for its success is that it packs an incredible amount of performance into a more accessible package, yet remains a Lamborghini at its exotic heart. But as with all ultra-high-performance machines, racing plays a promotional part, too; and the Huracan has been quite successful taking on the Ferraris and Porsches of the GT3 racing world. 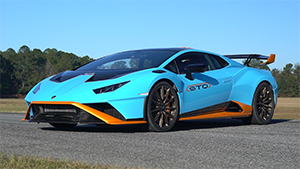 To celebrate that, as well as give Lamborghini buyers something special to aspire to, comes the Lamborghini Huracan STO. STO stands for Super Trofeo Omologato. To you and me, that means it’s a homologation model, or more precisely, a street-going version of their GT3 EVO Huracan race car.

But, what it really means, is there is lots of cool stuff that sets the STO apart from other Huracans; though with 631-horsepower already coming from the EVO version of their 5.2-liter naturally-aspirated V10, power is not one of them. It still whips up a healthy 417 lb-ft. of torque, and sends it to the rear wheels through a 7-speed DCT. It’s not quite a direct carryover, though, as engine response is customized and gear changes made even quicker, even though we didn’t think that was possible.

It still looks like a Huracan, but most of the STO’s body is unique, 3/4ths of it made of carbon fiber now. The 1-piece front clip, with larger air intakes and louvers to get air out of the wheel wells, also hides essential track-day storage.

The Huracan’s wedge shape creates plenty of natural downforce; but, in the interest of maximizing track gripping performance as well as aerodynamic efficiency, there’s a huge adjustable rear wing, and enough added scoops and inlets to keep a cartographer busy for quite a while. Plus, a shark fin up top that provides additional stability in high-speed cornering.

Extra cooling air gets fed into the engine bay through revised NACA ducts and a new scoop on the rear hatch. And, new magnesium wheels help shave weight where it matters most. 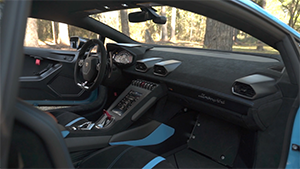 The weight loss theme is even more apparent inside, with more carbon fiber, thinner windshield glass, and the elimination of things like carpeting and traditional door handles.

But, in a nod to those who do plan on driving this beast on the street occasionally; both touchscreen infotainment and air conditioning are still here.

Between the more responsive powertrain, stiffer suspension bushings, wider track, new anti-roll bars, and MagneRide 2.0, we couldn’t wait to see how it all came together on Roebling Road Raceway in Savannah, Georgia.

The first thing we noticed is just how much you feel everything. Not only does the car respond immediately to inputs, as there seems to be no middleman in the transaction between steering inputs and turning of the wheels; but, the Huracan has plenty to say as well, communicating every inch of track surface to you and how exactly it’s adhering to it.

And that’s the next thing we quickly became aware of: the sheer amount of grip available here; something the Huracan has demonstrated since our very first test of it. Yet somehow, they keeping making it better and better, along with eliminating just about any hint of understeer. It does take quite a few laps to feel comfortable pushing a car this hard through corners, essentially putting aside your usual seat-of-the-pants limits of a street car. 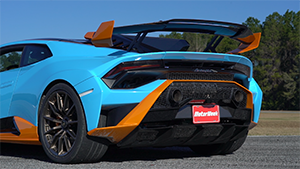 CCM-brakes by Brembo are derived from Formula 1 race specs, have some serious stopping power to them, and performed flawlessly throughout our testing.

Yet, with all of that, the STO still has an approachable feel that was a big part of what made the Huracan such a fantastic car in the first place.

No surprise, acceleration runs are a simple yet thrilling affair; basically, just stomp the accelerator and hold on for dear life. And, let Thrust Mode take you to 60 in 2.8-seconds. Upshifts are timed in microseconds, as the car works through the gears, and to a ¼-mile time of 10.8-seconds at 134 miles-per-hour.

On the street it has the same Government Fuel Economy Ratings of all other Huracans, 13-City, 18-Highway, and 15-Combined. For most of us, the scariest numbers of all, come behind the dollar sign; we’re talking at least $333,633 to make an STO y-o-u-r-s.

So, the Lamborghini Huracan STO sets itself apart in many ways. But the one that matters most is what it can do on a race track. Beautiful...it really is!