With Mercedes-Benz upping their entry-level appeal exponentially over the last few years, you might think there’s no reason left to step up to the middle weight E-class. Well, Mercedes was afraid you might be thinking that; so they’ve upgraded the E for ‘21 to make it’s loftier appeal ever more so.

Back in the day, to get the full Mercedes-Benz experience you had to go for at least a midsize E-class, as entry level models were more than a few steps down. That’s no longer the case, but that doesn’t mean that the E-class sedan is any less of a car than it was before. In fact, the 2021 Mercedes-Benz E-class offers buyers more than ever.

Starting with a revised interior that features the typical upgrade in materials; but goes a step further with an all-new steering wheel featuring touch-sensitive controls; as well as sensors needed for the operation of semi-autonomous driving. 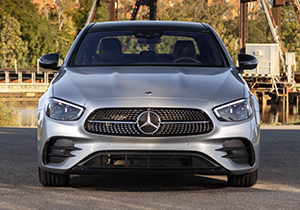 The twin-screen dash display is largely the same, and that’s a good thing, as it is as efficient to use as it is beautiful to look at. The central screen is of course a touchscreen, but there’s also a central controller, which also gets an update; eliminating the jog-wheel portion, leaving just the touchpad, which now blends into the center console much more smoothly.

As well as updated driver assistance features, including better functionality for Stop-and-Go Traffic Assist, and a new Exit Warning Assist.

Things outside get a re-work as well; there are updated fascias front and rear; along with a new trunk lid and tail lights. And there’s also a different hood with added power domes that hint of something new under the hood, and indeed there is.

Our E450 test car features Mercedes’ latest 3.0-liter inline-6 turbo engine, which replaces the previous V6. With an added EQ 48-volt electric boost, the inline rates 362–horsepower and 369 lb-ft.; exactly the same as the V6. So, with no additional power, increased efficiency must have been the reason for the switch.

And indeed the E450 sees a significant 13% overall jump in Government Fuel Economy Ratings to 23-City, 30-highway, and 26-Combined; which we matched exactly, at 26 miles-per-gallon of Premium.

The base 2.0-liter got a boost from 241 to 255-horspower last year; so it remains unchanged. Both work through a 9-speed automatic transmission; with 4MATIC all-wheel-drive optional with the 4-cylinder; standard in the 450.

Mercedes-Benz has been making things more efficient for at least as long as MotorWeek has been around. 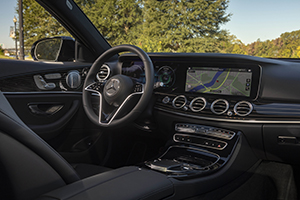 In our very first season, it was another inline engine performing the task, only it was a diesel in the 300SD. We called it the world’s most expensive economy car.  And, at 28 mpg it certainly got the job done, but at the price of a small home.

At our home away from home, MotorWeek’s test track, this E450 4MATIC hooked right up and got to work, with the healthy sounding I6 providing powerful and pleasant background music. It feels really quick, and a 4.3–second trip to 60 is indeed incredible for a Mercedes-Benz without an AMG badge.

Still, with everything from power delivery, to the 9-speed automatic’s shifts, plus the 450’s calm demeanor down the track being so smooth, it had us double and triple checking our numbers.

Getting through a ¼ mile in 12.9-seconds at 107 miles-per-hour with this much serenity is something we’re only used to experiencing in a Bentley.

The feeling was similar through our cone course as well. Other than optional 19-inch AMG twin 5-spoke alloy wheels, there are no Sport Packages or AMG handling add-ons here, so this car is set up for straight Benz luxury.

So, you’d think it’d be a snoozer through the cones, but that wasn’t really the case. True, most of the feedback from the chassis and steering wheel is muted; but steering was light and accurate, and there was only minor body roll. 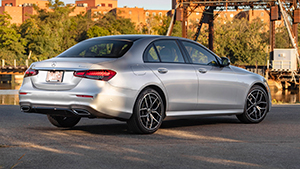 Brakes kept the smooth vibe going, but not the high-performance-like results, with stops of a still good 123-feet from 60.

Of course there’s a lot more to the E-class experience, as Mercedes-Benz still offers coupe and convertible varieties, and even wagons; not to mention AMG versions of them all.

A midsize sedan has always been a big part of the Mercedes-Benz lineup, and despite doing a healthy share of SUV business these days, the E-class remains the number-1 selling nameplate in Mercedes-Benz history. In the grand scheme of things, changes to this 2021 Mercedes-Benz E450 4MATIC may be relatively minor.

But the smooth and refined power of its new inline-6 engine has clearly elevated the 10th generation E to a whole new level; continuing the E-class tradition of delivering exceptional luxury transportation.