The Nissan Armada is a big, capable SUV with style and features heavily influenced by their Infiniti luxury division. But in the grand scheme of full-size, 3-row, truck-based utilities, it tends to get lost in the shuffle.  So, Nissan has updated the Armada in hopes of putting more wind in its “sales”.

Like most automakers these days, Nissan does plenty of dealing in car-based crossovers; but unlike most, for those that need it, they still offer a big truck-based 3-row option as well. For 2021, the Nissan Armada gets updated inside and out, along with added features to stand out among its rugged realm of competitors.

This imported 2nd gen Armada has been around since 2017, and now has more in common with Infiniti’s QX80 utility, and the globally available Nissan Patrol, than it does with the U.S. made Titan pickup truck.  Which is of course where the Armada’s voyage began.

Back in 2004, Nissan stepped up their game, literally, with a first ever full-size pickup truck, the Titan. The Armada utility came along with it; known then as the Pathfinder Armada. Nissan hoped that some name recognition would help things along. Full-framed with big-V8 power gave Nissan the specs it needed to be competitive with the Tahoe and Expedition.  Its rugged, industrial vibe worked well for the exterior; but not so much inside, where big chunks of plastic met a design that already appeared dated.

Things have come a long way in that regard, as the interior now closely resembles what you’d find at Infiniti.

Highlighted by a new center stack that streamlines controls and replaces the small in-dash infotainment screen with a big 12.3-inch touchscreen on top.

Gauges are also updated, getting a new 7-inch screen of their own. Add an available wireless phone charging station and redesigned console storage, and you have a highly functional setup that looks better than ever.

But, there are things like the cramped 3rd row, and the smallish cargo area with high load floor, which remain as reminders that this is an older design. 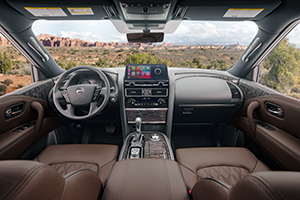 It’s a big climb up into the driver’s seat, with standard step rails there to help. Once seated and under way, those seats feel very comfortable, combining with the ultra-quiet interior to make for a pleasant driving experience.

One thing that hasn’t changed much, is the 5.6-liter V8 engine that’s been reporting for duty under the hood since the Armada began. Updates over the years, has its current output at 400-horsepower and 413 lb-ft. of torque, and it feels smoother than ever.

Rear-wheel-drive remains standard, 4-wheel-drive a $3,000 option. Max towing stays at 8,500-lbs; a tow hitch is also standard, and with all but base S trim sporting an integrated trailer brake controller.

We rarely have a complaint about Nissan V6s or 8s and that stays consistent here.  It lurches off the line with authority, getting to 60 in 6.5-seconds. Power stays steady throughout the ¼-mile with steadfastly smooth shifts from the 7-speed automatic transmission.

It remains relatively quiet inside the cabin even at wide open throttle here at the track, and the sounds that do seep in are fairly pleasing. Best ¼-mile time was 14.9-seconds at 94 miles-per-hour.

It definitely felt hefty through the cones, with a bit of a delay between when you initiate a turn and the Armada actually carrying out that command.  But, it’s not an unsafe feel at all, just more of an old-school softly sprung big truck vibe. 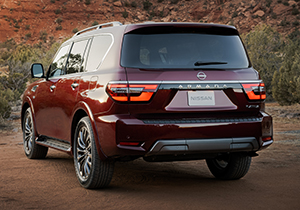 Which matches the sharper, more boldly fashioned exterior. Everything forward of the A-pillars is updated, even showcasing a new streamlined Nissan logo on the grille. Headlights feature more than 50 individual LEDs; not be outdone, each taillight has 70.

With a thirsty V8 under the hood, Government Fuel Economy Ratings come in at 13-City, 18-Highway, and 15-Combined. Expect no more than 15.5 in daily use.

Those ratings mean a worse than average Energy Impact Score of 22.0-barrels of yearly oil use, with 9.8-tons of CO2 emissions.

Pricing starts at $50,095; with top Platinum trim right at $65,000. Considering some full-size utes push 6-figures these days, the Armada is a lot of truck for the money.

The 2021 Nissan Armada is clearly better than ever; but still faces an uphill battle with the much more modern Tahoe and Expedition, along with big crossovers like the Hyundai Palisade and Kia Telluride muddying up the waters even further. But, it’s a truly capable, well priced, and quite luxuriously big SUV, more than worthy of your consideration.