Delivers What Matters Most At A Price-Point That Works

The Nissan Kicks arrived for 2018, as a more mainstream replacement of Nissan's funky Juke. It may have had a lot less personality than the Juke, but it delivered big time as a feature packed, efficient, and good-looking entry-level crossover. So let's find out where an updated Kicks heads next!

The Nissan Kicks is part of the newer breed of street-savvy utility vehicles; car-based yes, but with no all-wheel-drive even available. Instead, it prioritizes the urban life; being nimble, stylish, and economical to buy and live with. A mid-cycle refresh for 2021 sees the Kicks get both new style and new features. 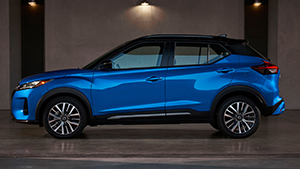 With so many vehicles in this entry-level crossover segment already, being a little quirky to attract attention is generally a good thing; and most would agree the Kicks looks pretty cool.

Up front, the bumper, grille, and headlights are all updated. There are 5-different 2-tone paint combinations available; the top SR model gets dark satin chrome trim, rear spoiler, black roof rails, and 17-inch black alloys, one of new wheel designs available for ’21.  An optional Exterior Package adds exhaust finisher and crossbars for the roof rails.

Things definitely appear built to a price inside, but it’s far from the most egregious in the segment, and upgrades make sure the all-important tech and connectivity features are taken care of.

In fact, Apple CarPlay and Android Auto are now standard. Upgraded infotainment features an 8-inch touchscreen display on all but the base model, which gets a 7-inch screen. There’s cool ambient lighting, more USB ports, nicer seat materials, and a new full-length center console.

Rear seat legroom is a little tight as is typical in the segment. But, seats-up cargo space of 25.3 cubic feet is abundant, and nicely finished. It expands to 53.1 with seat backs folded. 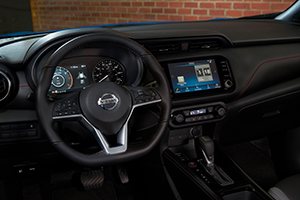 With not a lot of horsepower coming from under the hood, many of us would love to have seen some improvements here, but no such luck. The Kicks soldiers on with its naturally-aspirated 1.6-liter I4; and output is actually down 3-horsepower from ’18 to 122, with just 114 lb-ft. of torque. Some might call it underpowered, we’ll just say that’s one less thing to worry about when one of your kids is behind the wheel.

And really, it’s the slow responsiveness of the standard CVT transmission that is most responsible for the overall sluggish feel.

There was definitely no real sense of urgency leaving the line at our test track. The launch is a little more aggressive in Sport mode, but mostly consistent with a slight chirp of the front tires and then a slow build of power. It took us a full 10.0-seconds to hit 60, a few tenths longer than the original Kicks; slow, but again not terrible for the segment. Best ¼-mile time was 17.9 at 78 miles-per-hour.

The biggest improvement we noticed came at the other end of the track; as believe it or not, there were drum brakes on the rear axle of the Kicks originally.  Now SV and SR trims get discs, which resulted in a 10-foot improvement in stopping distance; 105-feet from 60. 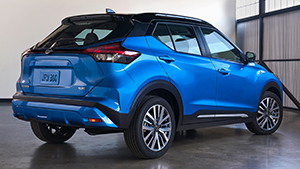 Over in our cone course, the Kicks feels light on its feet and tossable. The suspension is very soft though, so if you push too hard, it tends to roll and plow until stability control intervenes.

But, back off just a little and it feels quite nimble and lane-change willing with decent grip from the tires.

Good numbers when it comes to pricing as well; $20,775 to start, and just a few grand more for SV and SR trims.

So, the Nissan Kicks may not be the fastest vehicle out there, but it is one of the fastest selling among the new crop of small urban crossovers. Proof that Nissan has done their homework, and is delivering what matters most at a price-point that works for a whole lot of people. And for 2021, this pumped up Kicks should find even more traction.