The Nissan Rogue may not enjoy the lofty sales numbers of segment icons Toyota RAV4 and Honda CR-V, but it is fully competitive with them when it comes to price, features, or performance. So let’s see if an all-new 3rd generation Rogue has what it takes to narrow the gap.

While crossovers come in every shape and size these days, it’s really the compact segment, with the popular CR-V and RAV4, that started us down the road OF seeing An SUV in almost every driveway. So, understandably, the Rogue is currently Nissan’s best-selling vehicle; and they’ve got even bigger plans for the 2021 Nissan Rogue.

The Rogue was a bit of a late arriver to the compact segment, as Nissan had a much more rugged image in the early 2000s. 2003’s Murano began to change that, followed by the Rogue in ’08; and it immediately earned a MotorWeek Drivers’ Choice Award. We loved its spaciousness, sporty flair, and affordability; and considered it a fine alternative to the class standards. 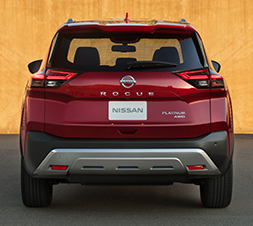 Roominess continues to be a theme of the new Rogue. All seats are comfortable, with passenger space approaching a midsize utility.

Plenty of room for cargo too; plus an available Divide-n-Hide storage system that allows for a lot of flexibility in how you store your items, and the ability to keep things out of sight.

With the floor at its lowest position, there is 36.5 cubic-ft. of storage space; 74.1 with rear seatbacks folded.

There’s a lot of small item storage up front too, with a pass-thru center console.

An 8-inch touchscreen display with Apple CarPlay and Android Auto is standard; an available Premium Package ups it to 9-inches. You also get a power driver’s seat in all but the base model. Leather-trimmed seating replaces cloth here in our SL tester; a new Platinum trim adds quilted stitching.

Which brings us to the exterior. Now, we mentioned Nissan’s past rugged image and how the original Rogue had a role in softening it. Well, it looks like it will now be leading the way in trying to bring some of that utilitarian vibe back. 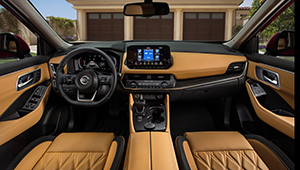 The new Rogue’s shape is much less rounded, with a face that’s taller and flatter; and the upcoming big brother Pathfinder is following the same trend. Overall length is actually 1½-inches shorter than last year, on the same 106.5-inch wheelbase.

And despite the same wheelbase, this is technically a new platform; part of the Renault, Nissan, and Mitsubishi partnership.

And early indicators are that they will all be well-served with this chassis.

Now, the Rogue won’t be confused as a performance SUV, with an overall soft feel, and a fair amount of body roll. But, it’s quite capable and even a little entertaining with Vehicle Dynamics Control turned off. It’s fairly responsive, and in Sport mode there’s a good weight to the steering.

While much of the segment has turned to turbo engines and 8-speed automatic transmissions, Nissan sticks with their naturally-aspirated 2.5-liter I4 and CVT combo. 181 is the number you need to know here, as it is both the horsepower and torque rating.

So, it’s not exactly a thriller when it comes to the drag strip. There wasn’t really enough throttle response to modulate what little wheel-spin there was in our front-wheel-drive tester. 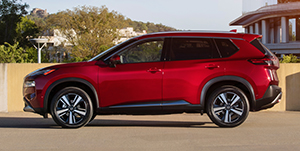 So we just rode it out and waited until about 4,000 RPM for the engine to build up some steam. Getting to 60 took an unhurried 8.5-seconds.

The simulated shifts that are built into this latest version of Nissan’s Xtronic transmission don’t really add any excitement, but do at least alleviate the typical CVT engine droning.  ¼-mile completed in 16.5-seconds at 86 miles-per-hour.

Base Rogue Pricing sees an increase of only $260 over last year; but the new Platinum trim pushes the top-level higher, to $36,625. Our SL was quite well-equipped at $33,195.  All-wheel-drive is available with all trims for an additional $1,400.

The bad news about the compact crossover segment is that even with so many entries, only a few established leaders continue to enjoy a large chunk of the pie.  But, the good news is, there are so many buyers, that you don’t have to be a sales leader to still sell a lot of them. You just have to offer comfort, space, value, and a little bit of style; all of which, the 2021 Nissan Rogue clearly delivers, now way better than ever.