With all of the Porsche 911 variations, there is one that is truly unique. The Targa 4. It’s not a convertible, and it’s not a hardtop. So, does that mean it’s the best of both worlds?  Or, just a so-so compromise? Well, let’s find out.

Usually when you see a Porsche 911, you have to do a double take to figure out exactly which one it is. That’s not the case with the 2021 Porsche 911 Targa 4. Its glass bubble hatch-like rear and silver Targa bar make it very apparent even from a distance.

The customary benefit of a Targa roof is of course delivering the open air experience, but with more body solidity than a traditional convertible; and of course rollover protection, as it was originally conceived as the world’s first “safety cabriolet” back in 1965.

But we’re not sure that really applies anymore, as all 911s, whether the top is hard or soft, are plenty solid these days and have rollover protection. So to us, it seems more of a styling exercise at this point; though surely track day Porschephiles will argue that there is indeed a difference.

We first tested a 911 Targa in 1996. And if you recall, the mid-90s were a tough time for Porsche; before they started raking in the bucks selling sedans and SUVs.

In fact, they were down to just one model, the 911, and the Targa version wasn’t nearly as distinctive looking as it is now, more of just a “super-sunroof”; but we sure dug the “very sexy German engineering.”

Things turned back to more traditional for the last generation, with the return of the Targa bar, and top storage under the power operated deck lid with wraparound bubble window. A design that has been praised by most, decried by others.

This gen takes it further, as the Targa bar is silver in standard fitment, but can be optioned to black if desired. The fabric roof features a magnesium structure, helping to mitigate some of the weight gain of the glass-intensive lid and the elements that put it in motion.

Being sort of an all-weather convertible, it makes sense that all-wheel-drive is part of the Targa package, thus the “4” now added to the name; your choices are just base or S trim.

The same 3.0-liter twin turbo-6 engine powers both; 379-horsepower and 331 lb-ft. of torque here in standard trim. The S winds the turbos up a bit more for 443-horsepower; all numbers the same as the Carrera Coupe.

Porsche’s latest 8-speed PDK is standard with both; a 7-speed manual is a no cost option, but only in the S.

Despite not being the most powerful 911 by a longshot, the Targa 4 launches hard and feels quite exhilarating getting up to speed. We hit 60 in 4.0-seconds flat.

A simple slalom course is just child’s play for this car. All-wheel-drive grip, and a neutral chassis setup allows you to find understeer if you’re a hard charger, or oversteer with an appropriate throttle lift. Regardless, as with most Porsches, it seems to handle better the harder you push it.

The Torque Vectoring rear differential and enhanced Carrera 4 all-wheel-drive system, are just the beginning of the electro/mechanical assistance systems making it all happen; there’s also Active Suspension Management and Traction Management working seamlessly behind the scenes. 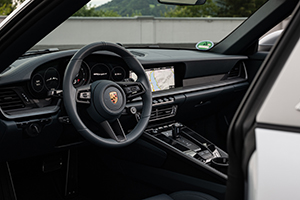 Out on the street, steering is quick and the suspension absorbs bumps with aplomb regardless of drive mode; but in its stiffest setting, you get what you ask for.

There’s not much that sets the interior apart from the rest of the 911 Carrera lineup; same vintage-inspired straight dash, central tach surrounded by virtual gauges and comprehensive info in front of the driver, and 10.9-inch Porsche Communications Management touchscreen set in the central dash with toggle switches just below.

The rising center console features a few more toggles and of course the shifter.

Coupe, Cabriolet, or something in between, in all of its forms, the Porsche 911 continues to offer some of the most supreme driver engagement in the automotive world right now; yet has the luxury amenities and an easy to drive nature that makes it more appealing to more people than ever.

The only thing stopping most, is of course, the price of entry. But, if you’ve got the wherewithal to be in the market for a new 911, why not choose a unique and spectacular looking one... the 2021 Porsche 911 Targa 4.